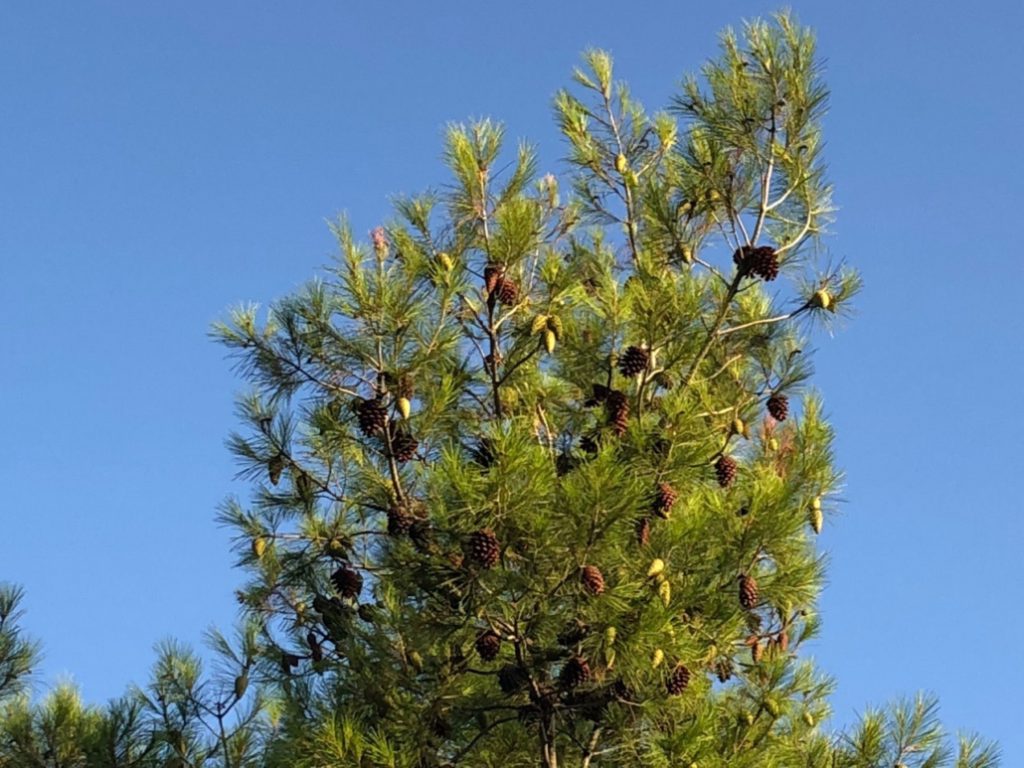 Retsina, a wine made with the infusion of resin usually from the Aleppo pine tree, is Greece’s most famous and historic wine. The retsina of old was often pungent.  As our reviews below show, today’s retsina made by some of Greece’s top winemakers is considerably more refined. In what follows, we discuss the many improvements they’ve introduced as part of the quality revolution in making retsina.

Pine resin has been a flavorant for 5000 years or more, and was used as such, and as a protectant when amphorae used to store and ship wine were sealed with pine resin to keep the air out, thus contributing a resin-like aroma and flavor to the wine[1].  It had the advantage of masking defects in winemaking or storage. In the first century, Pliny the Elder recommended adding resin to fermenting wine and discussed the qualities of different resins in his work Naturalis Historia.

Throughout the centuries travelers to Greece remarked on an unpleasant bitter, turpentine-like character of the wines.  Over time the production and consumption of retsina became centered in Central Greece, especially Attica.  Retsina regained popularity in the late 19th and 20th centuries, reaching its zenith in the mid-20th century as tourism to Greece increased. Tourism was followed by exports, and consumers worldwide began equating retsina with Greek wine.

Unfortunately, 20th century retsina was not of the highest quality. Predominantly made of Savatiano in Central Greece, it was picked ripe and fermented with minimal temperature control. The wines were often oxidized, low in fruit esters, and the resin concentration was often increased to mask the “off” character. 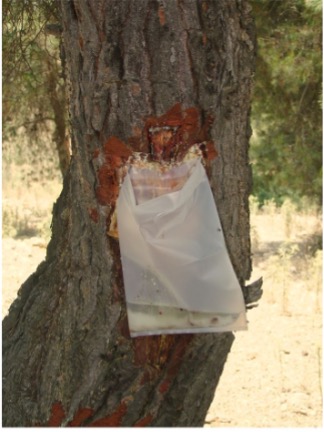 Today, retsina is made like a white wine except for the addition of a small amount of Aleppo pine resin during fermentation that contributes an oily film to the wine. When fermentation is completed, the resin is removed, and the wine is racked and clarified. Over time, the amount of resin used has decreased from a concentration of 7.5 percent in the 18th century to 1-2 percent in the mid-20th century.  Today it must be no more than 1 percent and a minimum of 0.15 percent.  As a result, high quality retsina has only mild resin-like aromas and flavors, most often compared to rosemary and lime.

Retsina is very much influenced by the choice of resin.In his book The Wines of Greece, Lazarakis reports that microvinifications carried out by Stelios Kechris show that “…different pine forests, different altitudes, even resins taken from the same tree but from cuts facing different directions…will result in different wines.”  Top producers pay careful attention to the quality of the resin.  Yianni Paraskevopoulos of Gaia uses a special, high-quality resin from Halepensis pines. Michalis Giannikos uses special resin that he collects and processes himself.   The vessels used to ferment and age retsina also matter. While most retsina is made in stainless steel, producers have begun experimenting with other vessels including amphora and oak barrques.

Tradtionally, retsina was mostly made from the Savatiano grape, the predominant variety of Attica and Central Greece. While Savatiano is still the dominant variety used retsina, top producers often use Roditis or Assyrtiko, which contribute higher acidity and palate weight than traditional retsina.  Some of the best retsinas, like the Savatiano-based ones of Stamatis Mylonas and Vassilis Papagiannakos, are very fine wines that just happen to have pleasant notes of rosemary and lime.

Stelios Kechris has perhaps taken retsina further than any other producer. In addition to his entry level retsina and the oak-aged Tear of the Pine, he makes a retsina rosé of Xinomavro and a sparkling retsina of Roditis.

In recent years, retsina has enjoyed a resurgence of popularity, especially in Greece where 80 percent of it is consumed. Younger generations have begun to embrace it in the wine bars of Athens.  Its rise in popularity is largely attributable to improvements in quality.  Winemakers like Stelio Kechris, Vassilis Papagiannakos, Stamatis Mylonas, Michalis Giannikos, Yianni Paraskevopoulos (Gai’a) and Panagiotis Papagiannopoulos (Tetramythos) sought to make a finer wine with nuance, acidity and freshness using innovative, modern production skills and thinking.  Paraskevopoulos started the ball rolling with his first release of Ritinitis Nobilis in 1996.

As with most winemaking, the first critical decision is when to pick. Stamatis Mylonas picks his Savatiano at Kerotea, south of Athens airport, early in the morning and rapidly transports the grapes to the winery where they’re cooled to 8°C before being gently crushed and given 6 hours skin contact before the pine resin is added to the must. As with the other producers of high quality retsina, he ages the wines sur lie with battonage.

In describing his winemaking, Vassilis Papagiannakos says, “…we pick early, ferment cool and use small amounts of pine resin from local trees. We do little if any skin contact during the press cycle, and we do about a 20 day infusion during fermentation (in stainless steel).”  This gets at a major difference in production of modern retsina. Most of the best retsinas add resin to the must, not the finished wine.  Papagiannakos also sources his retsina base wine from 50 year old Savatiano vines.

For Yianni Paraskevopoulos of Gaia Estate, the key issue for making his extremely fresh, vibrant and distinctive retsina is using a higher quality variety like Roditis and very minimal, fresh high quality resin.  He sources Roditis grapes from cool-climate, north-facing hillside  vineyards located on the Corinthian slopes with older vines and lower yields than typical of many years ago.  His Retsina, one of, if not the best in Greece, used only 60-70 g/hectoliter of resin 10 years ago, directly added to the must, though today, Yianni uses even less, closer to 30g/hl (website).  Only the free-run juice is used for fermentation. A carefully calculated quantity of resin from the Pinus Halepensis pine tree is added.  The result is an elegant, aromatic wine that show significant personality.

Gai’a NV Retinitis Nobilis ($19) 93  Light green straw. Showing a delightfully fresh pine-herbal rosemary, sage and thyme bouquet followed by a delicate but very flavorful, soft fruit-driven palate of citrus pith, fresh herbs and a distinctive touch of quinine on the finish. Made of Roditis, which offers a nuanced, red currant like accent on the finish. In sum, very tasty, fresh and complex. Sourced from cool climate, north facing vineyards on the Corinthian slopes. The wine is made of only free-run juice with the addition of resin from the Pinus Halepensis tree.  Importer: Winebow

Kechris NV Kechribari Retsina Thessaloniki PGI ($10) 89  Stelios Kechris’ entry level retsina offers assertive aromas of rosemary, pine and wild herbs on the nose. The herbal-infused palate mirrors the nose with additional notes of citrus and menthol. This inexpensive retsina reflects the improvement in the quality of Retsina being produced in Greece today. 11.5% alc. Kechris 2021 Afros Appellation by Tradition  88  Pale straw. This lightly effervescent wine is a sparkling retsina made from the Roditis grape variety using the Charmat method. The nose offers hints of mentholathum accompanied by citrus and herbal notes on the palate. An interesting sparkler. Kechris 2020 Tear of the Pine Retsina Appellation by Tradition 92 Light golden straw. Introduced in 2005, Tear of the Pine set a new quality standard for Greek retsina. Made from Assyrtiko fermented and aged 6 months on the lees with battonage in mostly used French and American oak, the wine is a top quality Assyrtiko with alluring acidity, complexity and depth of flavor. It reveals perfectly integrated oak and subtle notes of rosemary and lime. 100% Assyrtiko sourced from a single vineyard of sandy loam soils in Goumenissa. 13.5% alc. Importer: Dionysos Imports

Tetramythos NV Retsina Amphorae Achaia PDO 91 Pale silver straw. Made of 100% Roditis sourced from the Tetramythos estate vineyard on the slopes of Aigialeia at 650-1050m overlooking the Gulf of Corinth, this retsina is suggestive of a cool climate wine. It offers a very fresh nose with hints of lemon zest and thyme, and the palate is super fresh with stimulating acidity. A subtle and subtly impressive retsina from the 2021 vintage. Fermented and matured through malo in amphora. The pine resin comes from the same location as the grapes. 12.5% alc.  Importer: Dionysos Imports

[1] “Residue of tartaric acid scraped from a ceramic jar at Hajji Firuz Tepe in the northern Zagros Mountains of Iran revealed that the jar contained wine. This jar dated to an even older period, circa 5200 BCE. A second jar analyzed from the same site showed that the wine had been flavored with resin from a terebinth tree (Pistacia terebinthus), also common in Turkey and a known antioxidant, antimicrobial substance (so this would have been the original retsina).”  from McGovern (2009) Uncorking the Past.