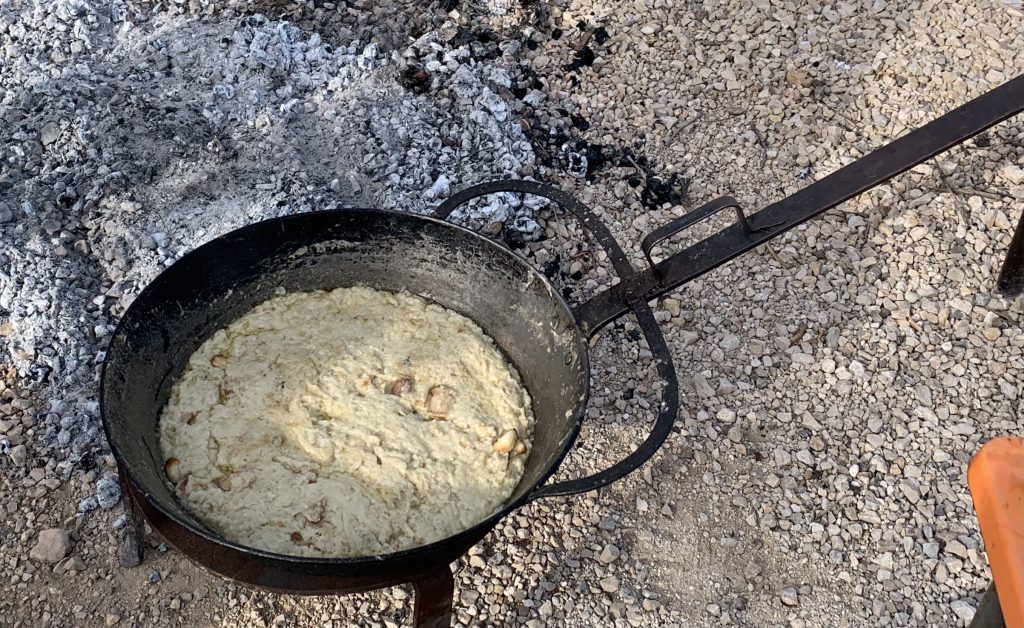 Gastronomia Jumillana is savory and honest country cuisine. It pairs well with the earthy, fruit wines made from Monastrell.  Some of the local dishes described below are unlikely to be found in restaurants outside Jumilla.  But they use some of the same ingredients and are similar to Spanish dishes, especially paella, made elsewhere.  On our recent trip to Jumilla, we tasted the wines and dishes described below at the wineries and fine restaurants of the area.  Muchas Gracías to the Consejo Regulador D.O.P. Jumilla and to Cinco Sentidos for organizing this very informative and enjoyable trip. 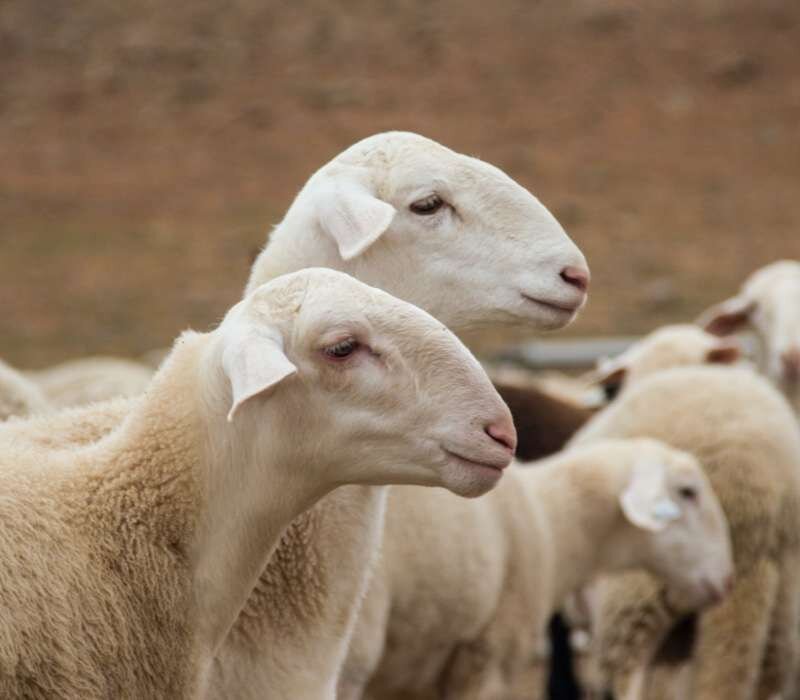 Jumilla’s cuisine is based on locally-grown ingredients.  Appetizers often include Jamón Ibérico and Manchego cheese made from the milk of the Manchega sheep grown in Castilla-La Mancha, including the Albacete part of the Jumilla DOP.  It’s often followed by a salad of fresh tomatoes with olive oil-packed tuna belly and Queso Fresco Frito con Tomate (fried goat cheese) made with the milk of the Murciano-Granadina goat.  These light dishes pair well with fruit forward Monastrell wines like the Finca Bacara 2020 Crazy Grapes or Bodega Cerron’s 2020 El Tiempo Que Nos Une Monastrell, which is fermented 50% whole cluster in concrete vats. 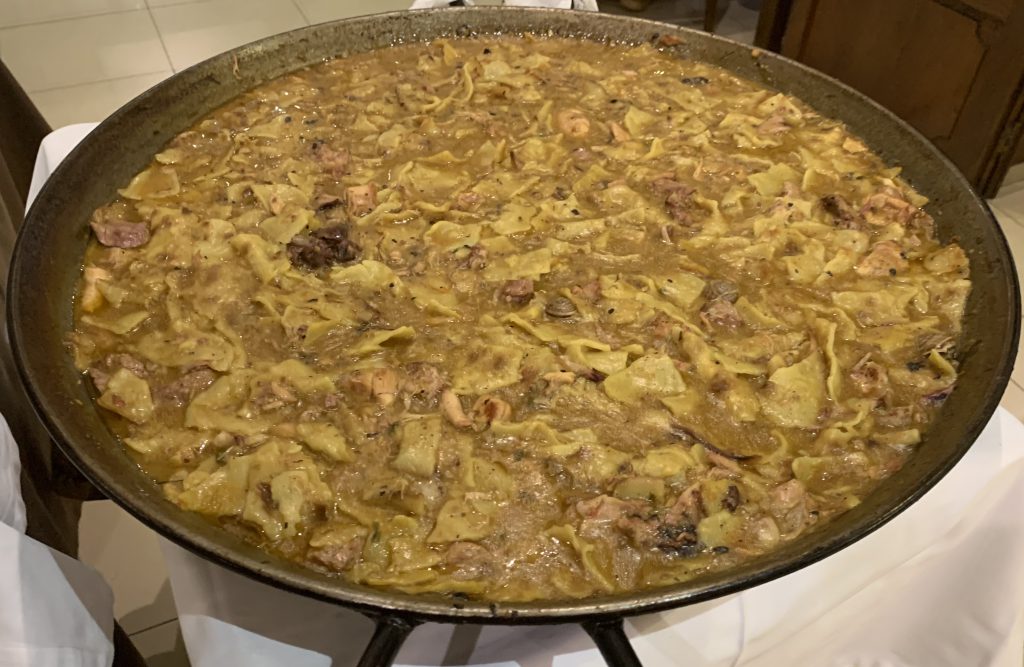 The principal Jumilla dish is arroz (rice) made with the Calasparra rice native to the Murcia region (native at least since it was introduced by the Moors a few hundred years ago).  Perhaps the most common rice dish is Arroz y Conejo con Caracoles (rice, rabbit, and snails), which is made in a large paella pan.  Another popular dish is Arroz con Collejas (rice with greens, mushrooms, and pork).  Another dish cooked in a large paella pan is Gazpacho Murciano, which bears no resemblance to the gazpachos found elsewhere in Spain and is made with unleavened bread pieces, wild game, and snails.  These paella-like dishes offer complex savory flavors that pair well with wines made from older, dry farmed Monastrell vines, many of which are pie franco, i.e., vines grown on their own roots.  Good choices are the Bodegas Carchelo 2016 Muri Veteres made from very old, ungrafted, very low yielding (0.3 kg/plant) Monastrell bush vines or the Casa Castillo 2018 Gravas made with 25% whole clusters and 10% Garnacha and aged in 50hl oak foudres for 18 months. 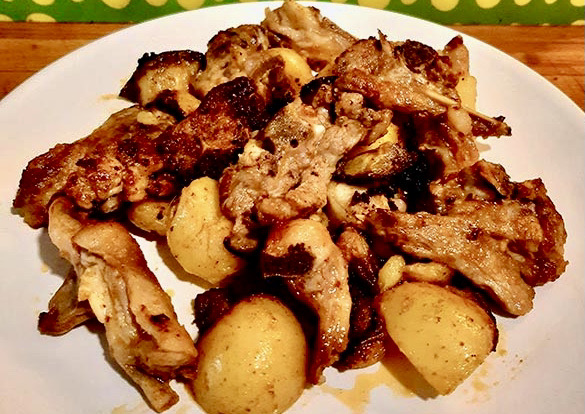 Baby goat is one of the most popular meat dishes in Jumilla, especially the Cabrito Lechal Jumillano Frito con Ajos.  Codorniz (quail) prepared in several ways is also popular.  These very flavorful foods pair well with full bodied wines like the Bodegas Nido 2019 El Clio, a 70/30 blend of Monastrell and Cabernet Sauvignon matured 24 months in oak,  or the Bodegas Luzón 2018 Por Ti, an 80/20 blend of Monastrell and Cabernet Sauvignon aged 18 months in French and American oak barrels.

Another dish commonly eaten in Jumilla and Murcia, Gachamiga is cooked in a large iron skillet over an open fire is a dish popular with vineyard workers.  It’s solid porridge-like food at its most basic—a combination of flour, water, olive oil, and garlic. 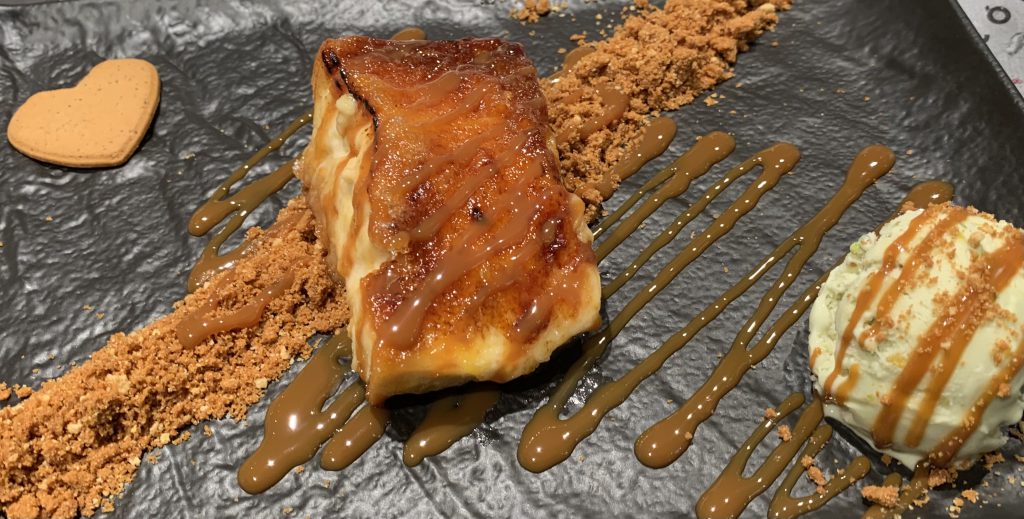 Jumilla’s sweet Monastrell, especially the Bodega Olivares 2017 Monastrell Dulce, is so good that one hardly need to think about dessert.  However, Jumilla is home to some wonderful, sweet foods, including Mantecados de Almendra (almond cookies), Rollos de Vino (wine cookies), and Torrijas Murcianas, which are like a thick French toast topped with a rich crème brulée.

Look for our full report on The Wines of Jumilla, forthcoming soon at www.iwinereview.com.