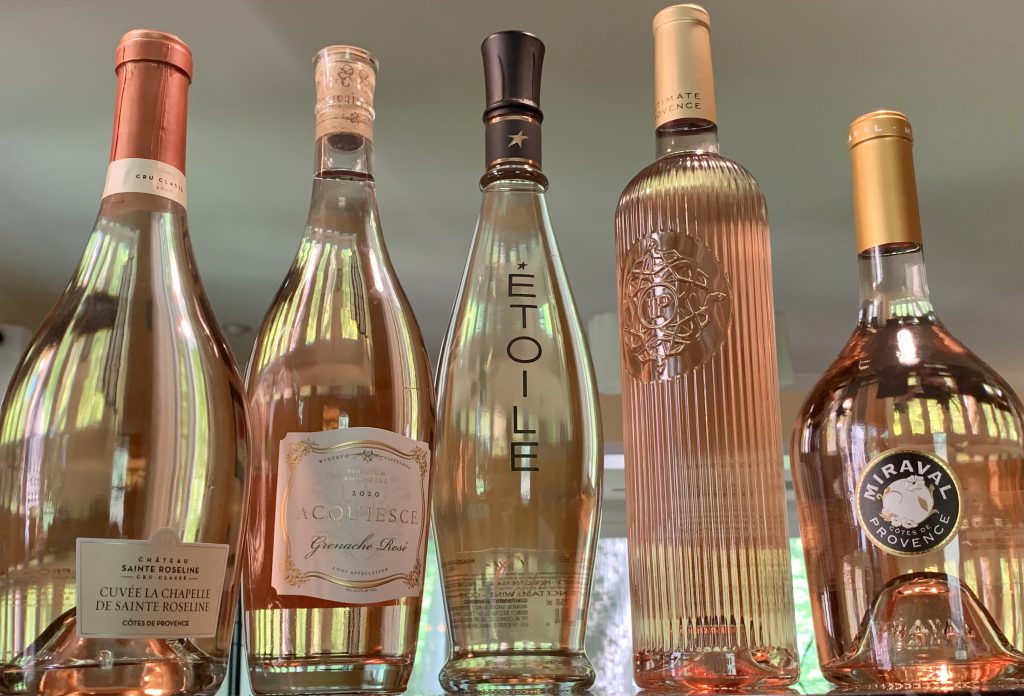 Perhaps no wine is as stylish as rosé.  The color of the wine, the shape of the bottle, the design of the label and even the name of the wine influence the consumer’s purchase.  While this is true for all wines, it’s more true for rosé with its alluring colors, exotic bottle shapes, and celebrity endorsements. Like most things rosé, the stylish trends began in Provence.  We examine these trends in more detail in our soon to be released 2021 Rosé Wine Report.

Today, most rosé is a light color ranging from barely blush to copper or orange tinged salmon. Several factors contribute to color, most importantly, the grape variety and color and the time the juice is in contact with the skins.  In the case of some sparkling rosé, color is also affected by the amount of red wine added to the blend (which is not permitted for European still rosé). Producers have responded to the popularity of pink by changing the color of their rosés. We used to drink flavorful, light red Spanish rosados made from Garnacha; today few can be found. The international pale pink style dominates, often at the expense of flavor.

There are exceptions to pale pink. Most Tavel rosés, which are typically made saignée style, have retained a light to medium red color. And many rosés of Pinot Noir coming out of Oregon and California also have more color (and flavor).

What is now regarded as the traditional Provence shaped rosé bottle began in the mid-20th century as producers began bottling their own wine and designing their own bottles as well. René Ott created the distinctive Domaine Ott bottle (see the bottle in the middle of the photo) with its wide middle and narrow base in 1930; Ott continues to use that bottle style today.  New World producers are also beginning to realize that the shape of a wine bottle can accentuate the alluring colors of rosé and attract the style-conscious consumer. Sue Tipton opened her boutique winery Acquiese in Lodi in 2004 and quickly attracted  a following with her sophisticated white Rhone varietals in bulbous, Provence-style bottles imported from France (the bottle to the left of Ott’s Etoile).

Of course, not all rosé comes in the typical Provence shape.  Most rosé of Pinot Noir comes in the traditional Burgundy shaped bottle, and Bandol and many rosés made from Bordeaux varieties come in Bordeaux shaped bottles.  And even many Provence producers continue to innovate to develop bottle designs that call special attention to their products. For example, the Miraval rosé (at the far right in the photo) comes in a distinctive, cognac-squat style bottle.

Labels have always been an important part of wine design and marketing.  In this year’s tasting, we’ve observed a growing number of transparent labels.  Sometimes there is no front label, and the back label is transparent and almost impossible to read. This puts all the attention on the shape of the bottle and the color of its contents. 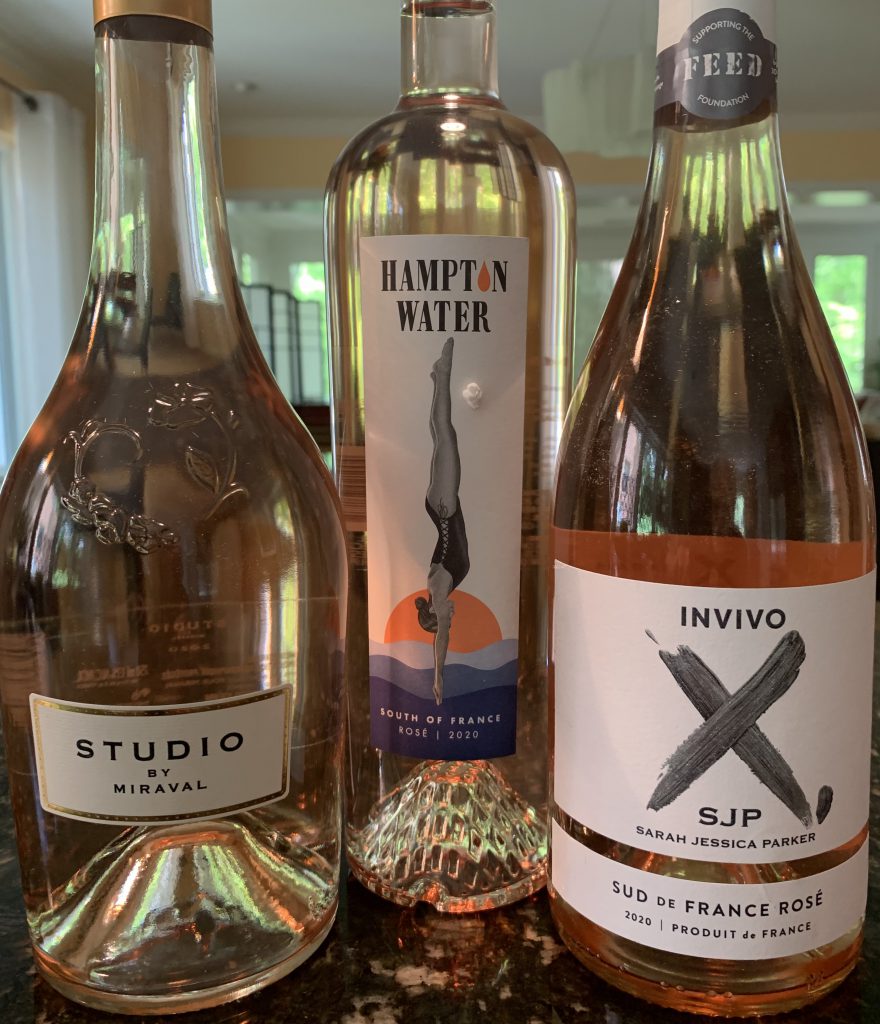 Celebrities have had a long affiliation with wine. In the 19th century, stars like John Philip Sousa and Jules Verne were featured in ads for Vin Mariana, a blend of ground up coca leaves with red Bordeaux. And in the 20th century, Dick Smothers and Francis Ford Coppola put their names on Napa Valley wines. But the wine world has seen nothing like today’s flood of celebrity rosé.  We’ve included a few in our annual rosé report; shown above are Miraval by Brad Pitt and Angelina Jolie, Hampton Water by Bon Jovi, and Invivo X by Sarah Jessica Parker.

While most celebrities do little more than approve the final blend, a few like John Malkovich actually grow the grapes. While having a celebrity’s name on the bottle doesn’t guarantee high quality, it stands to reason that a bad wine would not be good for an actor’s or singer’s reputation.  So, other things equal, expect at least a decent rosé from a celebrity.

There’s no questioning the stylish beauty of many rosés.  The big question is, does a stylish rosé taste better?   Read our upcoming annual rosé report with reviews of over 200 rosés to find out.

This entry was posted in Rosé, Uncategorized, Wine Type and tagged Lodi, Provence. Bookmark the permalink.