Introduction to Georgian Food and Wine 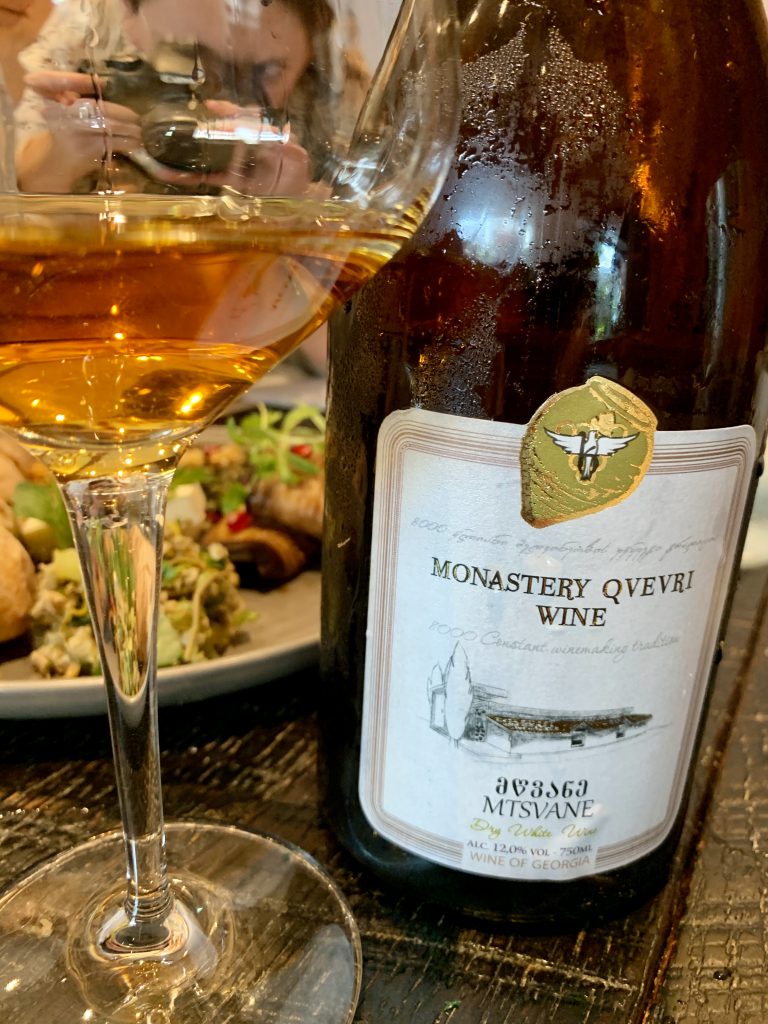 If you haven’t tasted Georgian food and wine, from the Republic  of Georgia, you will want to remedy that sooner than later.  We did last week at Supra, Washington, DCs finest Georgian restaurant where we enjoyed a traditional Georgian feast called a supra. The International Wine Review team usually pairs wine and food when we write about a region’s wines, as we’re now doing for Georgia.  However, we rarely have had the opportunity to enjoy such a wide variety of dishes with fine wine  as we had for our supra at Supra!  For that we thank our collaborator, Jonathan Nelms, owner of the restaurant.

For this supra we tasted several wines from Khareba Winery, one of Georgia largest and finest producers with 1500 hectares of vineyards and four winemaking facilities.  Located in the provinces of Imeriti and Khaketi, where Khareba Winery has its vineyards, it grows over 25 different grape varieties specializing in Georgia’s indigenous varieties.  They produce 30 different wines in addition to sparkling wine and brandy.

What is a supra?  Georgians don’t do appetizers, main courses, etc. like other western countries.  Rather, cold dishes are usually on the table waiting for you when you get to a supra. Then without clearing the platters, they just start bringing other dishes, sometimes piling up the plates. 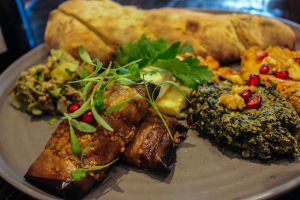 Our supra began with Gobi or “friends platter,” a sharing plate of the most popular traditional Georgian dishes.  These include:  Kale pkhali and carrot pkhali – vegetable patés of walnuts, charred kale and carrots, and parsley; Aubergine nigvzit –lightly fried strips of eggplant rolled around a filling of finely ground walnuts, sunflower seeds, parsley, garlic, and blue fenugreek;  Jonjoli –“Georgian capers,” which are not really capers at all but the pickled buds of the Colchis bladderwort bush; Kakhetian guda cheese – sharp sheep’s milk cheese, sort of a cross between feta and Pecorino Romano (and totally unrelated to  Dutch gouda) and Imeruli cheese made from cow’s milk.

The wines selected for  the Gobi were  two  silky and delicious wines make of the Tsitska grape:  Khareba  2019 Krakhuna Dry White and a Khareba 2014 Monastery Qvevri Wine Mtsvane.   This second wine is fermented and matured in a qvevri, an earthenware vessel.  Both paired well with the vegetables, but  the Monastery Qvevri  with its natural richness was  our favorite. 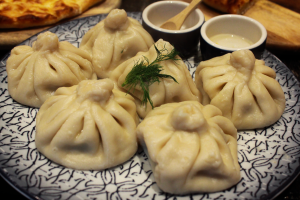 Following  the Gobi  we were treated to Green Lobio Baxhit-green beans grilled and served with Bazhe, the Georgian mother sauce which is featured  with  many Georgian dishes. Pork and Beef Khinkali (soup dumplings) followed and were a treat since they are usually served at dumpling houses and are normally not part of a Supra but were served so we could try them. These dumplings are on the heavy side, but the reward is biting into them as they offer a rich liquid filling.

Georgian stuffed breads are a big treat served separately or as part of a supra.  We shared the classic cheese-filled Khachapuri called Imeruli  and the pork and beef-filled bread Kubdari, which are made in the restaurant’s oven. 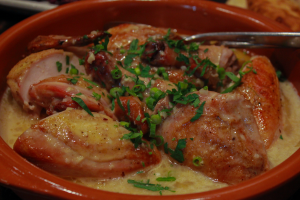 A delicious roast chicken in a creamy garlic sauce, Chkmeruli ,followed which gave us the opportunity to taste some Georgian red wines.  The first, which went well with the chicken, was a simple, dry plum-flavored Mukuzani 2017 Silk Road made from 100% Saperavi, Georgia’s finest red variety. We were then treated to Lamb Tkemalit,  wonderful grilled  lamb chops served with grilled cabbage slaw and green tkemali, a Georgian green condiment.   We paired the lamb with an outstanding 2014 Saperavi  Premium Gold  sourced from Mukuzani, the region that grows the best  Saperavi. Our final red wine was a medium sweet  Khareba 2017 Kindzmarauli Saperavi.   Supras rarely include dessert, but we were treated to a few cakes with which to pair the wine.