Our wine reports and tasting articles show our enthusiasm for the wines of Priorat. ( see IWR Report  #28 The Wines of Priorat)    In this article we discuss the wines of the different growing regions of Priorat and taste the Black Slate village wines imported and produced by Eric Solomon in collaboration with Priorat’s outstanding winemakers. (See the upcoming report on Garnacha in the IWR’s May-June  issue).

Pioneering wine makers like Renè Barbier, Alvaro Palacios, Daphne Glorian, Carles Pastrana and Josep Luis Pérez reclaimed Priorat after centuries of neglect, and this areas was soon recognized for its unique character as a wine growing region.  In our report on The Wines of the Priorat we introduced readers to this region’s special decomposed slate soils (licorella), treasure chest of old Garnacha and Cariñena bush vines, and the passionate winemakers who craft the many extraordinary wines of this tiny wine region (5,000+ acres) located 90 miles southwest of Barcelona. 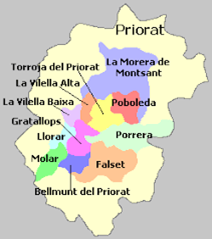 To pioneers like Alvaro Palacios, the Priorat terroir had similarities to Burgundy and merited recognition as such.  Thus, in 2009 Palacios and others introduced the Vi de la Villa wine designation program to give Priorat village cru designations similar to that used in Burgundy.  The program identified 12 wine producing zones or villages each with its own typicity– parameters that identify the wines as coming from specific soils and varieties. (see map).  Under the program, a winery could also elect to designate its wine as a Vi de Finca Qualificada, an equivalent to a single vineyard wine, if a wine is made from that parcel or vineyard.

In 2019 Priorat’s Regulatory Council approved revisions of the original Vi de la Villa program under which were created regional wines, village wines, vi de paratge (similar to climats or lieu-dits in Burgundy), vinya classificada (equivalent of a premier cru), and gran vinya classificada (equivalent of a grand cru).  It also approved 459 paratges sites or places of origin for the wine labels.

The creation of the Vi de la Villa classification in Priorat motivated importer Eric Solomon and a group of winemakers in the region to craft a series of wines that reflected the unique terroir of individual villages in Priorat.  The series, which is called Black Slate, was launched in—–and today consists of four red wines and one white.  The wines are crafted by the individual winemakers and Eric Solomon, and quantities vary from 500 cases to 4.000 cases with retail prices averaging $25 in the United States.  At these affordable prices, readers are now able to taste some of the finest village wines of the Priorat.

Mas Alta 2017 Black Slate La Vilella Alta Vi de Villa Priorat  91  The 2017 Black Slate La Vilella Alta is produced under a joint project of Damia del Castillo Blaise, Michel Tardieu and Philippe Cambie.  It is a blend of 50% Garnacha , 30% Carineyna and 10% Cabernet Sauvignon grown on licorella and clay limestone soils.  It displays a spicy ripe nose with rich and flavorful boysenberry, black raspberry, and minerals.  Fermented in tank and aged in French oak barrels, 30% new, it is silky on the attack with a firm structure, good acidity, and a rich ripe finish.   The grapes are sourced from a 60 ha vineyard with vines planted since 1999.  Old vine grapes are purchased from nearby growers.

Priorat  93 A wine with a lovely floral nose with a scent of honey.   It is fresh and crisp on the palate with hints of apricots and a lovely mouth feel with underlying minerals. A blend of 85% Garnaxta Blanc and 15%  Garnacha Gris sourced from ancient vines planted on licorella and chalk at 650m elevation.  Crafted by veteran winemaker Jordi Vidal. 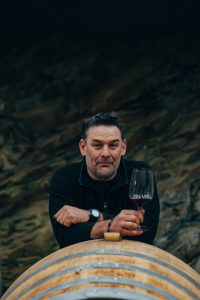 2017 Back Slate Porrera is a blend of 64% Garnacha, 27% Carinyena and a small amount of Cabernet Sauvignon. Dark ruby in color, it reveals light mineral and saline notes on the nose with barely a trace of fruit.   On the palate it is nicely concentrated with flavors of red and black fruit complemented by notes of graphite, smoke and minerals.  A wine that develops in the glass and has a long persistent finish.   Sourced from a 20-30 -year-old, 35 ha organic vineyard; partially destemmed with natural yeast fermentation in tank and concrete, aged 12 months in used 225 and 300 L French and Hungarian oak.  Joan Sangenis serves as winemaker.

Celler Cecilio  2018  Black Slate Gratallops Vi de Villa Priorat  94  The 2018 Black Slate Gratallops is a blend of Garnaxta Negra, Carinyena and Syrah grown on licorella and clay limestone soils of a 9 ha vineyard at 400-500 meters.  It displays an effusive nose, rich ripe red and black fruit with a hint of Asian spice. Complex and mouthfilling, it displays an excellent backbone, dark fruit and licorice flavors with a sense of minerality. Fermented in tank and aged in French oak barrels, 30% new, It has a dry finish with rich extract and a touch of heat on the finish; 15%alc.  The winemaker is August Vicent.

Conreria d’Scala 2018 Black Slate Escaledei Vi de Villa Priorat 94   Jordi Vidal’s 2018 Black slate Escaladei is a magnificent wine.  A blend of 64% Garnatxa, 27% Carinena, and 9% Syrah, it is fermented in concrete vats and aged 80% in concrete 80% and 20% in neutral French oak barrels. It displays a spicy ripe nose with rich and flavorful  boysenberry, black raspberry, and minerals.   It is soft and lush on the attack and silky smooth on the palate with concentrated flavors and an elegant finish.  Sourced from a 9 ha vineyard of 40 to 100 year old vines at an altitude of 400-500 meters.