The Wines of Babylon’s Peak in South Africa’s Swartland 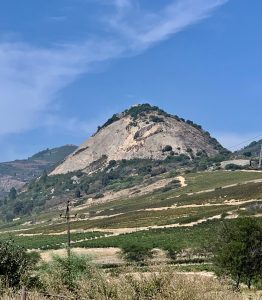 Located in the Swartland not far from the wineries of Eben Sadie and Adi Badenhorst, Babylon’s Peak has been in the Basson family since 1919. Its most remarkable feature, aside from deeply rutted roads and a profusion of wildlife, is the Peak itself, an ancient solid granite dome surrounded by old bush vine vineyards of Chenin Blanc, Pinotage, Carignan and other varieties.  The farm made and sold wine by the barrel until 1948 when the Swartland cooperative was formed, after which the fruit was sold to the coop and, later, to Distell. But when Stephan Basson returned to the family farm in 2003 he decided the family should start making and selling wine from some of its best fruit. He now makes about 20 thousand cases sold under the Babylon’s Peak brand, which we tasted at the winery. Our tasting notes follow.

Babylon’s Peak has 350 ha of vineyards including younger vines planted on the valley floor with vertical trellising and machine harvesting and older, dry farmed, hand cultivated and hand harvested bush vines on steep hillsides and at the top of the mountain.  Annual production is around 4 thousand tons, ten percent of which is used for the Babylon’s Peak brand.  The remainder is sold as grapes to some of South Africa’s top wineries (Fairview’s Pegleg Carignan is sourced here). About 90 percent of the winery’s production is exported, primarily to Europe. 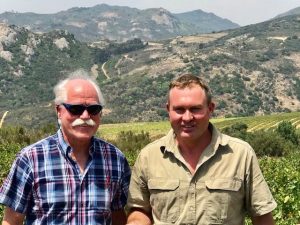 The Author with Stephan Basson on top of Babylon’s Peak

Stephan’s experience growing grapes and selling wine in South Africa is instructive. Part of his motivation for making wine was to save the farm’s bush vine parcels, which are not only low yielding but also costly to cultivate.  Large grape buyers pay only about 25 percent more for high quality bush vine fruit versus the fruit of much more productive, young, trellised vines. As a result, there’s every incentive for growers to rip out the old vines unless they do as Stephan and make and market their own wine.  Stephan also found that marketing his wine in South Africa yielded little return compared to exporting, which explains his current focus on foreign markets. 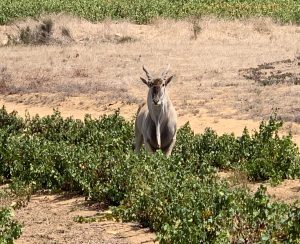 Bucky the Eland Enjoying his Salad of Grape Leaves

Growing grapes in the Swartland comes with its challenges.  The local wildlife enjoys the grapes, too. A troop of about 80 baboons lives in the hills adjacent to the vineyards. They eat the grapes, while a local herd of eland eat the vines. Fortunately, cape leopards control the baboon population, and the large eland also help scare them away.  They also scare away visiting foreign journalists who get too close. The drought, which is fortunately now over, also affected the vines. The 2018 vintage resulted in exceptionally small berries that were also harvested earlier than usual.

These wines were all tasted at the winery in the Swartland earlier this year.  The US Importer is Kysela Pere et Fils of Winchester VA.

Babylon’s Peak 2018 Dryland Bush Vine Chenin Blanc Swartland ($14) 90 This unwooded Chenin is made from a single vineyard of 38+ year old dry farmed bush vines planted on granitic soils. It offers a complex bouquet of minerals and tropical fruit with an herbal edge. The palate is crisp and mineral like with appealing guava fruit notes.  Stephan aims for a fresh style, and he succeeds.  One doesn’t typically age an inexpensive wine like this, but giving Chenin additional time in  bottle often enhances complexity and richness. Stephan showed us a 2007 vintage of this wine, and it had evolved into a delicious, rich wine of honeyed peach and dried apricot.

Babylon’s Peak 2018 Viognier Roussanne Swartland ($15) 90  This 60/40 blend of Viognier and Roussanne offers a perfume of white flowers and a finely focused palate of spice and white stone fruit with just a touch of minerals and white pepper. At the time of tasting, this wine had just been bottled and was for that reasons a bit closed; the 2017 vintage we also tried was richer, more expressive and had a lovely, slippery lanolin mouth feel.

Babylon’s Peak 2017 Pinotage Paardeberg Swartland ($15) 90+ Semi-opaque. An outstanding value in South African Pinotage, the 2017 vintage shows an effusive nose of dark cherry, chocolate and tobacco. It’s big and rich in the mouth with flavors that evoke black raspberry and dark cocoa powder. Quite ripe in style with a long finish. At 14.5° alcohol, it’s a big wine.

Babylon’s Peak 2018 Shiraz Paardeberg Swartland ($17) 91  The Shiraz is our favorite of the Babylon Peak portfolio. It offers nice purity of black fruit with a licorice note on the nose and flavors of blackberry, mocha, and a touch of dried fruit. It’s softly textured with good supporting acidity and has an attractive cracked pepper spice note. Fermented with some viognier skins and matured 12-14 months in oak barrels.

Babylon’s Peak 2017 Shiraz Carignan Swartland 91  Not yet imported to the US, but we found this 60/40 blend of Syrah and Carignan to be especially attractive. The Carignan comes from a single, 34 year old block that also provides the fruit for Fairview’s highly regarded Pegleg Carignan [named after Stephan’s father, who lost a leg in a farm accident].  The wine is quite ripe but with refreshing acidity and firm tannins. It’s richly aromatic and big in the mouth with spicy dark fruit.