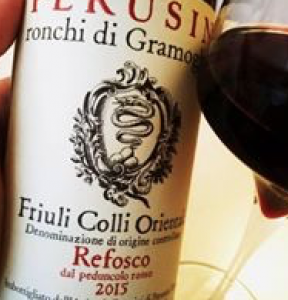 The Perusini ronchi di Gramogliano winery is located in Italy’s Friuli-Venezia-Giulia region, which produces some of the finest wines of Italy. Sandwiched between the Adriatic Sea to the south and the Julian Alps to the north, Friuli’s cool climate is uniquely suited for high quality wine production. This is especially true for Colli Oriental, the Friuli’s appellations where Perusini is located. Colli Orientali is just to the west of Collio, another of the regional appellations justifiably famous for its elegant white wines. We wrote about Friuli and Collio in some depth in our Report # 63: The Wines of Friuli: Collio’s Elegant Whites.

Perusini ronchi di Gramogliano is most famous for its Picolit, a rare grape variety that almost became extinct but was revived in the 19thcentury by Giacomo Perusini, but it grows other grape varieties as well, including Ribolla Gialla and the oddly named Refosco dal Peduncolo Rosso.  Located in the hills of Gramogliano within the municipality of Corno di Rosazzo, the Perusini estate enjoys a terroir well suited for producing high quality grapes, both indigenous and international. Our reviews of the wines are given below. Corno di Rosazzo is famous not only for its wine but, also, for the historic Abbey of Rosazzo, which we visited while preparing our report on The Wines of Friuli: Collio’s Special Whites. 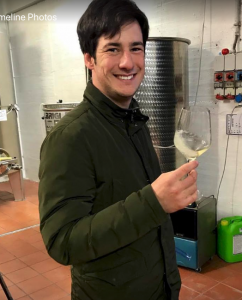 A very old variety, Picolit was along with Hungary’s Tokaji a favorite of royalty as early as the 17thcentury.  A difficult grape to grow, it almost became extinct when French varieties became all the fashion in the 18thcentury. Fortunately, Giacomo Perusini resuscitated the variety and planted it in the hills of Colli Orientali beginning in the late 19thcentury. When he was killed in the first World War, his wife Giuseppina continued his work, and today his grand daughter Teresa manages the winery. The winemaker is Michele de Pace Perusini, Teresa’s son. All the Perusini wines are made with organically cultivated (and certified) organic grapes.

The US importer is Regal Wine Imports. 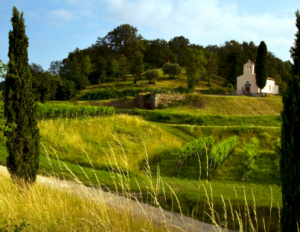 Perusini 2017 Pinot Grigio Colli Orientali del Friuli ($22) 89 Pale yellow straw.  This is a crisp, aperitif style Pinot Grigio with a distinct and prominent mineral edge. It shows white melon and a hint of lime along with chalky minerals that run from the nose to the crisp finish.  Its neutral, crisp character makes it the perfect match for oysters, sushi, and other raw and lightly prepared seafood. Made from hand harvested grapes grown at Monte S. Biagio in the hills of Gramogliano. Spends 6 months on the fine lees with no malo.

Perusini 2018 Sauvignon Colli Orientali del Friuli ($22) 90  Light yellow.  Showing scents of pear and fresh thyme, the Sauvignon is dense and mineral like on the palate with herbal, almond and orchard fruit notes on the palate. An original wine that hits the happy medium between the green Sauvignons of New Zealand and the riper Sauvignons of California. Rich extract and thick chalky minerals on a lingering finish.  89

Perusini 2018 Ribolla Gialla Colli Orientali del Friuli ($22) 90 Light yellow straw.  The Ribolla Gialla is similar to the Pinot Grigio with its pronounced minerality, but it’s a more intense, flavorful wine. Aromas of flowers and herbs give way to flavors of nectarine and peach with a lemon edge. The finish is long and pleasant. A wine that could be paired with a wide range of light fare; excellent with Julia Child chicken breast. Ribolla Gialla is like Picolit another historic variety that is enjoying growing popularity today. It’s commonly made as a sparkling wine.

Perusini 2016 Refosco dal Peduncolo Rosso ($25) 91 Dark red. Perhaps Italy’s most under-rated grape, Refosco offers rich flavors and freshness in a relatively low alcohol red. This medium weight wine reveals blackberry and black cherry fruit on the nose and palate with fine, firm tannins on a long finish.  A lovely, easy drinking wine with real charater.  There are many Refosco varieties, but the Refosco del Peduncolo Rosso, named after its red stalk, is especially popular in Friuli. Genetically, it’s the father of the Veneto’s Corvina grape used to make Amarone.

Perusini 2011 Picolit ($90/500ml) 94 Copper-tinged medium dark gold. Showing effusive aromas of dried stone fruit, orange citrus, and acacia, this is a gorgeous sweet wine, creamy and lush on the palate with excellent freshness and bright acidity that easily balances the 169 g/L RS. The palate shows hints of dried apricot, honey, and toasted nuts. An outstanding wine best consumed with a rich, creamy cheese. Partly dried on the vines and partly harvested very late, the Picolit is matured in barriques of oak and acacia. While the Perusini Picolit is sweet, the variety is also used to make dry wines. It’s also used in white blends like Jermann’s Vintage Tunina and Livio Felluga’s Illivio.