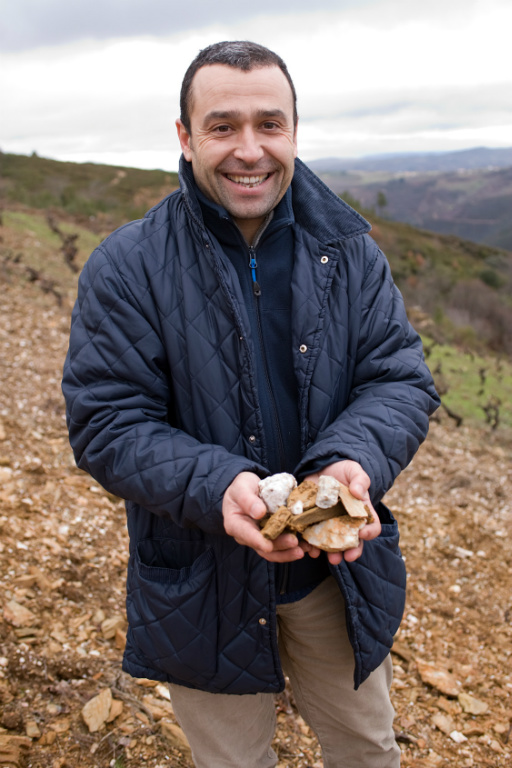 José Luis Mateo is one of Spain’s very special winemakers. He crafts authentic wines from unique terroir in Galicia using indigenous varieties, including ones he has discovered and rescued from abandoned mountain vineyards. He is one of those rarities in the winemaking world, a pioneering spirit always experimenting with ways to improve his vineyards and his wines and concerned about reuperating his region’s vinous past. We recently met with José Luis to taste his Quinta da Muradella wines and learn more about him and the exciting Monterrei wine region.

José Luis farms 20 hectares of organically certified vineyards in the tiny Monterrei appellation in Spain’s Galicia wine region, located just north of the border with Portugal.  His vineyards are in 23 different parcels with different soils, altitudes and exposures, giving him a rich palette from which to craft his unique, authentic wines.  He started the Quinta da Muradella winery in 1991 with two parcels where his father used to make wine for the family. He started out making richly oaked, single varietal wines but soon abandoned them in the search for elegance and authenticity. Today his wines are refined, balanced expressions of the grape varieties and terroir of the Monterrei region. 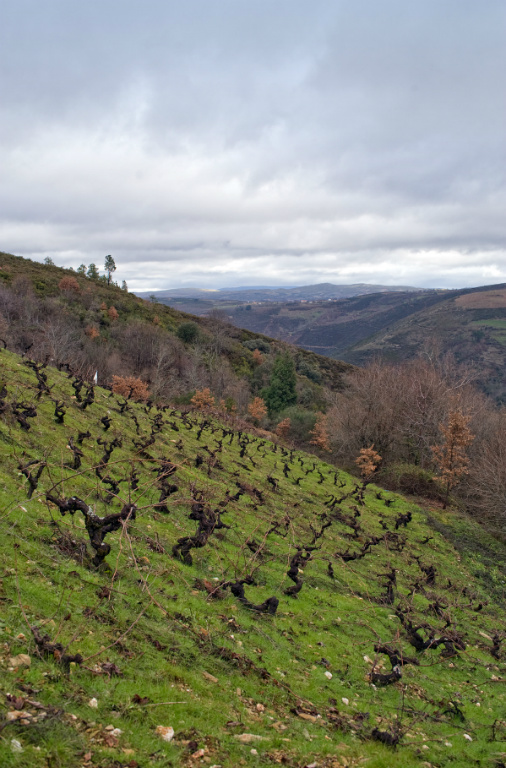 As with many of the world’s old wine regions, the phylloxera epidemic of the late 19th century resulted in winegrowers replacing their indigenous varieties with more productive one. In the case of Monterrei, they grafted Mencia and Alicante Bouschet (Garnacha Tintorera) on to American rootstock. José Luis has gone back to the region’s vinous origins to focus on varieties like Dona Blanca, Treixadura, Albarello, and Monstruosa de Monterrei among the whites. He personally discovered the Monstruosa de Monterrei variety in the mountains and used massal selection to plant a new vineyard of the variety in 2002. Among the reds, he works with Bastardo (Merenzao), Mouraton, Sousón (Souzão) and Caiño Redondo in addition to Mencia and Garnacha Tintorera.  His vineyards have a wide variety of granitic and iron rich slate soils at altitudes ranging from 300 to 800 meters. Some lie outside the Monterrei boundary, which includes only the valley floor and lower slopes.

Consistent with his winegrowing philosophy, José Luis makes his wines with minimal intervention.  He makes mostly blends from whole berry pressings, cofermenting grape varieties as they did traditionally, using ambient yeasts and no temperature control during fermentation, and aging in used oak. He searches for natural equilibrium in his wines. His first wine, Alanda Tinto, was released in 2000. Today he makes three different types of wine: the Alanda blends of grapes from different parcels; the Gorvia single vineyard wines; and what he calls his mountain wines from high altitude vineyards.

The Monterrei Denominación de Orígen (DO) is tiny with just 26 producers, 426 growers, and 566 hectares of vines on the valley floor at altitudes from 335-440 meters. Another 3200 ha of vines grow in the valley but are outside the DO. It has three growing districts within the DO: Pazo de Monterrei, Oimbra and Tamaguelos; the Alando Tinto is a blend of grapes from all three. Located inland, Monterrei is considerably hotter and drier than parts of Galicia located nearer the Atlantic.

Quinta da Muradella 2013 Alanda Tinto Monterrei ($42) 91 Medium ruby red. A focused, lightly flavored, linear wine that reveals its cool climate origins but also shows some rich ripe spicy plum and cherry fruit with a touch of underbrush. Very fresh and sweet on the attack and firmly structured with bright acidity. A co-fermented long and slow blend of 65% Mencia, 30% Bastardo, and 5% Garnacha Tintorera with extended maceration. Matured 14 months in French oak followed by 6 months in vats. Sourced from all three of Monterrei’s growing districts.

Quinta da Muradella 2009 Crianza Oxidativa Monterrei ($62) 93 A truly unique wine. Sherry-like with oxidized aromas. Very rich and dense with honeyed almonds, dried fruits and oxidized notes on the palate. Made of 100% Dona Bianca aged in barrel where a thin layer of flor grows and protects the wine. Bottled without filtration.

Quinta da Muradella 2012 Gorvia Blanco Monterrei ($71) 92 Dried flowers and a touch of stone fruit and herbal aromas. Intense minerality in the mouth with dense, leesy, stony, chamomile, white almond and herbal tea flavors. Superbly balanced and long with medium plus acidity. Made from 100% Dona Blanca grapes planted in 1987 on iron and slate based soils on the valley floor on a single vineyard site. Aged 8-9 months in 500L French oak barrels.

Quinta da Muradella 2015 Gorvia Tinto Monterrei ($71) 93 Refined and elegant, this complex red blend has a silky soft, round, fruit rich palate showing ripe flavors of plum with earth and mineral notes. Made of 90% Mencia, 5% Bastardo, 5% Caiño Redondo planted in 1987 at 460 m altitude. Silky in texture with still firm tannins. Aged 14 months in French oak followed by 10 months in stainless steel. A wine with superb mouth feel and excellent persistence on the finish.

Quinta da Muradella 2012 Muradella Blanco Monterrei ($82) 93 The 2012 Muradella Blanco is a complex wine exhibiting hints of citrus, white flowers and wet stone. It is very dense and focused, with a firmly structured palate of concentrated and persistent flavors. Made from 100% Treixadura aged 8-10 months in 3 year old 500L barrels. Sourced from 6 different vineyard parcels of bush vines situated at 460m altitude planted in 1945-97.

Quinta da Muradella 2012 Muradella Tinto Monterrei ($82) 94 Rich, earthy and savory, the 2012 Muradella Tinto reveals a perfumed nose and is elegant in the mouth with beautiful black cherry, plum and red fruit highlights. The tannins are round, and the flavors persist to a rich finish. Made of organically cultivated 30% Mencia, 30% Mouraton, 30% Bastardo, and 10% Garnacha Tintorera planted 1930-50 at 600-790 m altitude. Only made in the best years; last made in 2008.

Quinta da Muradella 2012 Castrillon Tinto Monterrei ($111) 95  The 2012 Castrillon Tinto is the finest wine in this outstanding lineup. It is hugely aromatic with iron rich plum and dark cherry notes. A beautifully refined wine, it is dense and silky on the palate with a very rich, extracted finish. Aged 14 months in French oak, followed by 48 months in the bottle. The grapes for this magnificent wine are sourced from organically cultivated vines planted in 1993 at an average 420m altitude. Farmed with donkies, the vineyard is south facing and is buffeted with cold winds.

This entry was posted in Countries and Regions, Spain, Uncategorized and tagged Featured, Galicia, Monterrei. Bookmark the permalink.