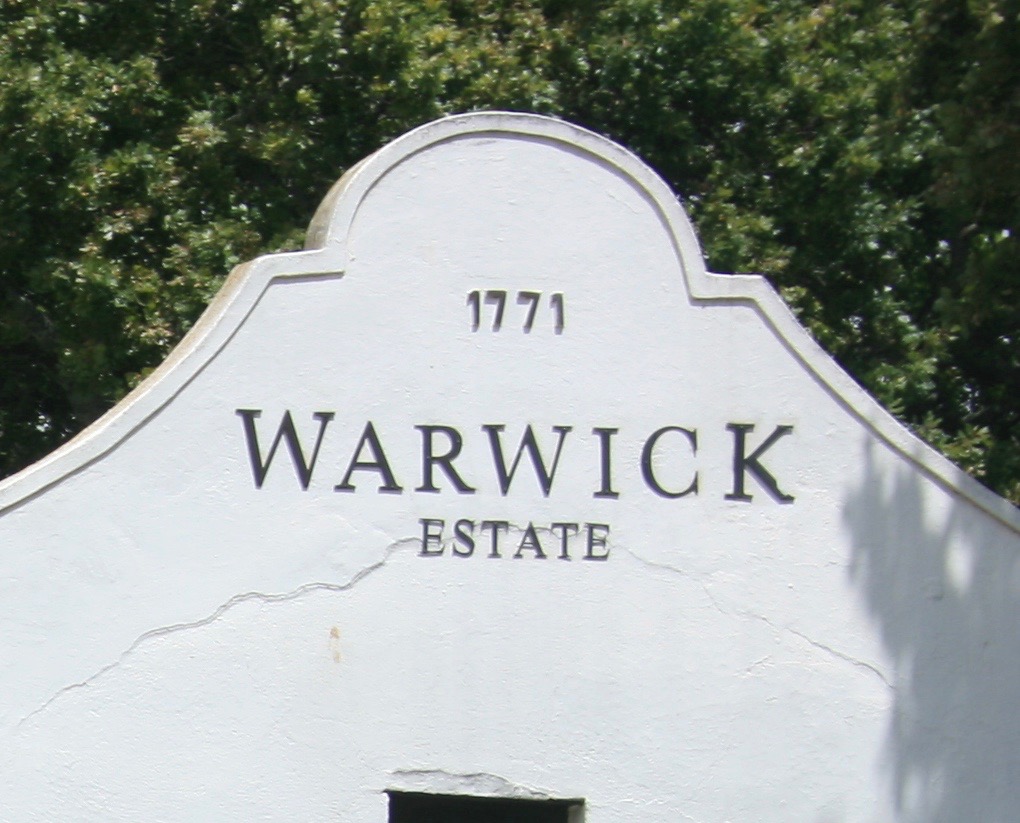 We visited winemaker Nic van Aarde last week at the attractive Warwick Wine Estate on Hwy 340 north of Stellenbosch.  Warwick produces about 120 thousand cases annually from both estate and purchased fruit. They’ve decided that Chardonnay and Bordeaux varieties do best on the terroir of their estate vineyard, and as they replant their vineyards they are focusing on those varieties. Cabernet Franc does especially well, and Warwick was the first South African winery to release a single varietal of the variety.  We tasted their new releases, of course, and talked about viticulture and winemaking in the Western Cape.  Our wine reviews can be found below. 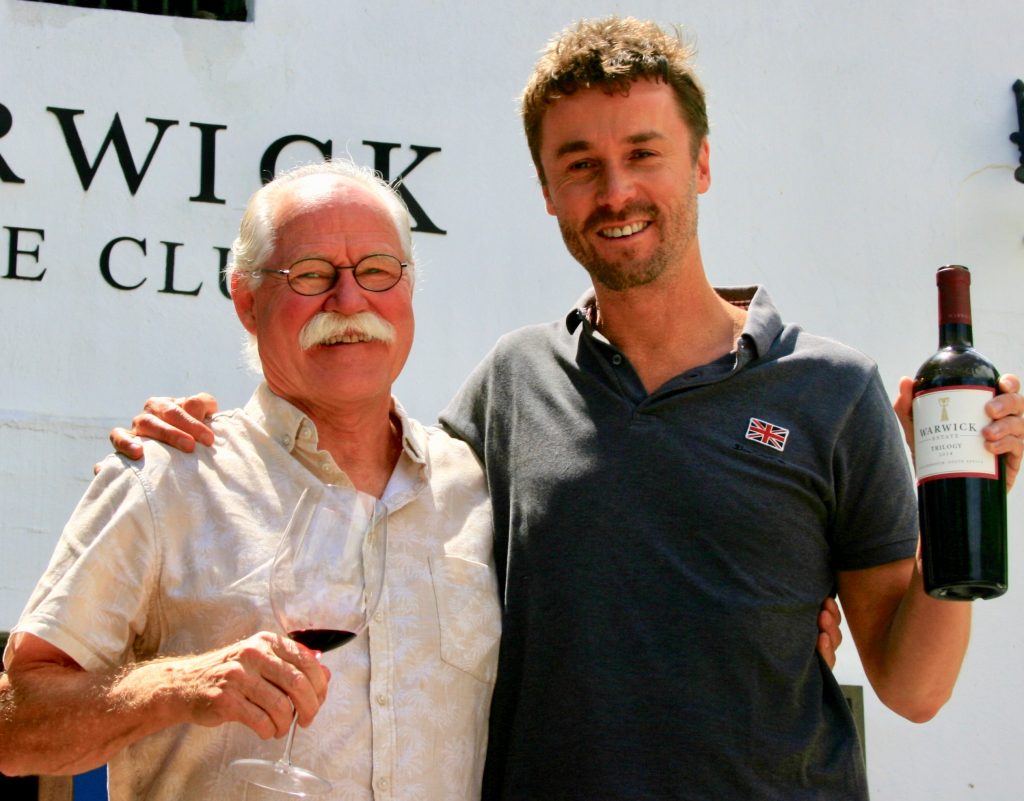 Warwick has an illustrious history. The Ratcliffe family bought the farm in 1964 and sold fruit to the large government KWV cooperative until 1984 when Norma Ratcliffe made and sold the first vintage of Warwick wine, a Cabernet Sauvignon called La Femme Bleu. Norma is legendary in South African wine circles. She’s one of the first South African women to make wine, and was the first woman elected to the elite Cape Winemakers Guild, which she later presided over. Today her son Mike manages the winery, and Nic has been making the wine since 2011, after working at Mulderbosch and doing harvests at Angelus in St. Emilion and Harlan Estate in Napa. Ronald Spies is in charge of viticulture.

Leaf roll virus has been the bane of South African vineyard, and Nic described the aggressive efforts Warwick is making to rid its 60 hectares of vines (42 now bearing) of the virus. It shortens the life of vines, reduced yields, and interferes with proper ripening of the fruit. Fortunately, the symptoms—beautiful autumn red foliage—are obvious, so it’s easy to identify vines that need to be pulled out. But Warwick goes beyond this. They are systematically replanting vineyards that shows signs of the virus, an expensive process that entails ripping out old vines, spraying with insecticide to kill the mealybugs that carry the disease, leaving the land fallow for three years, and then replanting. To avoid reinfectation, vineyard equipment and vineyard worker’s clothing must be inspected and cleaned when traveling between vineyards. An if a grower has the bad luck to be located near a neighboring vineyard that’s infected, the disease is like to arrive in any case.  Fortunately, Warwick’s vineyards are relatively secluded.

The US importer is Broadbent. Fells & Sons is the UK importer. 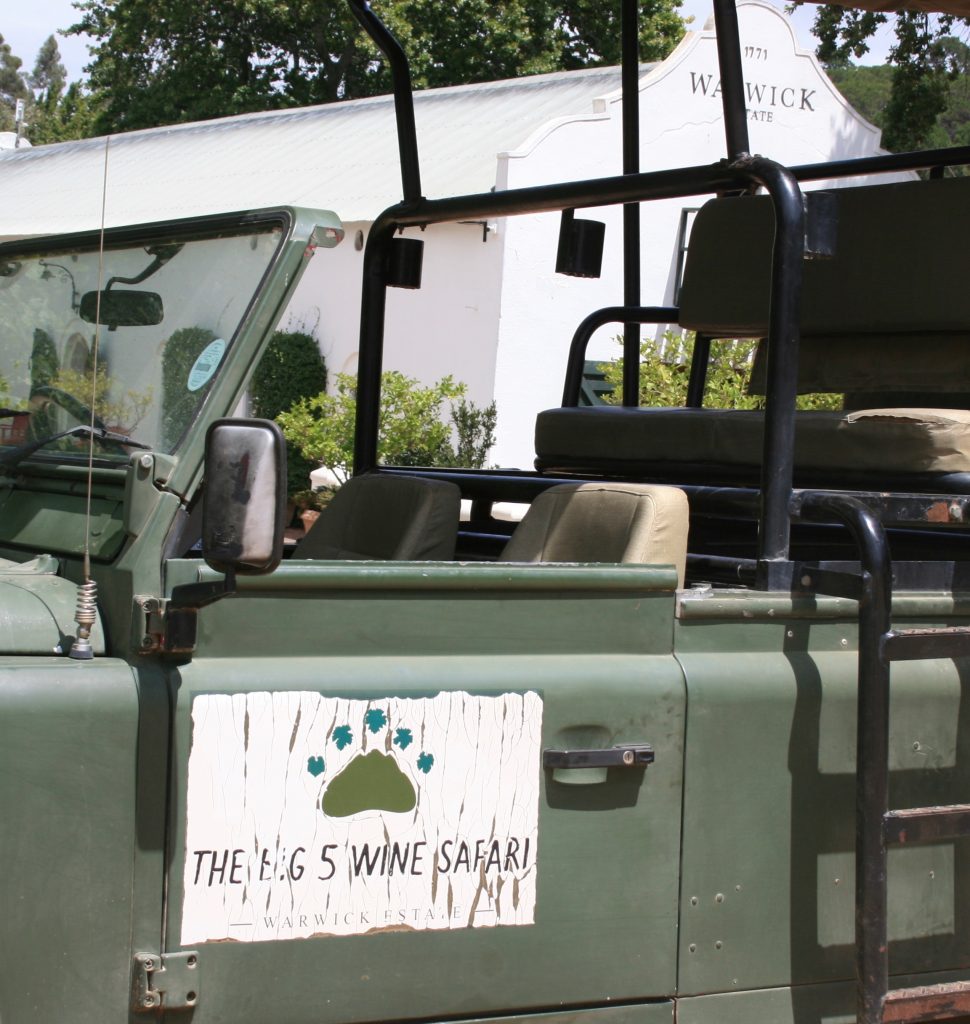 Warwick 2017 Professor Black 91  This white Bordeaux blend of 65% Sauvignon Blanc (from Darling) and 35% Semillon (from Elgin) is fermented in 400L neutral oak barrels and  aged 10 months in oak barriques.

Warwick 2016 White Lady Chardonnay 92  Showing touches of honeysuckle, orchard fruit, and vanilla oak on the nose, this wine has a delightful, creamy mouth feel although it only sees partial malo. It has excellent balance with a light stone fruit palate and refreshing acidity. Hand picked, whole bunch pressed, and fermented with ambient yeast in barrel, about 1/3 new. It goes through a long fermentation with frequent battonage done by rolling the barrels. 2016 yields were down by almost half due the drought and to poor fruit set due to high winds.

Warwick 2014 Three Cape Ladies 90  For the last 21 years a Cape Blend including Pinotage, from 2015 on Three Cape Ladies will be a Bordeaux blend as Warwick continues to reduce its holdings of Pinotage and Shiraz. This is a pleasant, easy drinking wine with touches of black raspberry and spice and showing a smooth mouth feel. A blend of 40% Pinotage, 30% Shiraz, and 30% Cabernet Sauvignon.

Warwick 2015 First Lady Cabernet Sauvignon 89  This is an easy drinking wine to be had with casual fare. Sourced mostly from Robertson, it’s juicy with flavorful red fruit and gentle tannins.

Warwick 2014 Black Lady 90 This all Shiraz wine reveals blackberry and peppery spice with a touch of herbal mint and showing nice firm acidity and fine tannins on a long finish. 33% whole bunch fermented with one barrel done carbonic. A lovely wine, perfect for the braai.

Warwick 2014 Cabernet Franc 92  Effusive on the nose, this is an impressive wine with dense, fresh dark red fruit complemented by peppery spice on the attack. Finely textured on the palate with nice red fruit notes, a touch of Cabernet Franc leafiness, and firm dry tannins. An excellent wine from the Cape’s Cabernet Franc specialist. Sees 24 months in barrel, 40% new.

Warwick 2014 Trilogy [Warwick Estate in the US] 93   This Cabernet Sauvignon led Bordeaux blend offers a complex mélange of exotic spices and fresh mulberry and blackberry complemented by notes of tobacco leaf and underbrush.  55% Cabernet Sauvignon, 17% Merlot and the rest Cabernet Franc, all matured in 60% new French oak. Beginning in 2015, this wine will be led by Cabernet Franc.