Food and Collio Wine in Friuli 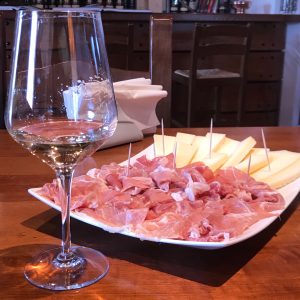 The food and wine of Friuli show the influence of Italian, Slavic, and Germanic cultures.  Friuli is home to the country’s best cured meats, especially, prosciutto, flavorful cheeses made from cows that graze on Alpine pasture, creamy polenta, and venison and other roasted meats.  During our trip to the Collio region of Friuli earlier this year, we enjoyed this fare with the region’s wines at the many fine restaurants and cafes of the area, including the Enoteca de Cormons and the Michelin-starred La Subida, located just outside Cormons.

Collio produces a wide range of food-friendly wines from mineral-driven Sauvignon and Friulano to the high acid, fruity Ribolla Gialla, the elegant Collio Bianco white blends, and sweet, passito style wines made from Picolit and Verduzzo. To add further variety to this mix, several winemakers macerate white grapes on the skins or give their wines extended oak aging, resulting in more, complex savory traits.  While this region is best known for its white wines, it also makes flavorful reds, ranging from the fresh, medium bodied Refosco dal Peduncolo Rosso to full-bodied Merlot, Cabernet Franc and Schioppettino, the region’s best indigenous red. 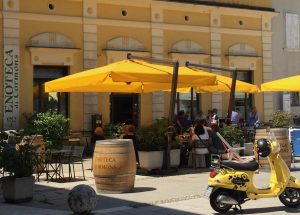 L’Enoteca de Cormons Located in downtown Cormons on the Piazza XXIV Maggio, the Enoteca was founded in 1990 to promote the wines of Collio. It’s where winemakers gather to converse, and where wine tourists can try the wines of the over 30 winery members of the Enoteca while enjoying a plate of D’Osvaldo Prosciutto or many other light dishes. In addition, training classes are held upstairs for winery workers of the region. The charming Elena Orzan is the efficient and capable manager of the Enoteca; Dario Raccaro is President.

D’Osvaldo Prosciutto di Cormòns Luigi D’Osvaldo founded this firm, one of the best Prosciutto producers in Friuli, in 1940. Luigo’s son, Lorenzo, makes the ham today with his son Andrea. About 2000 hams are produced annually, using cherry wood, bay leaves and spices to cold smoke hams in the Austrian style from locally grown pigs. The production process takes 14-24 months depending on the size of the ham, during which time the ham loses about 40 percent of its weight. D’Osvaldo’s Proscuitto is served in many of Friuli’s finest restaurants, typically accompanied by a Friulano from Collio.

Friuli is home to some of Italy’s most renown cured meats, like goose salami (Jolanda de Colo) and the Pitina sausage. The prosciuttos of San Daniele DOP are world famous, and we especially liked Cormons’ Austrian-style, D’Osvaldo prosciutto (see box).  An equally famous starter is Frico, a crisp made of Friulian Montasio cheese.  Friulano is the classic pairing for prosciutto, and it also goes well with a young Montasio.

The Slovenian culinary influence shows up in Jota, a soup traditional to Istria and Western Slovenia. This is a tasty cabbage and bean soup made from sauerkraut, beans, sausages and potatoes, cooked with sage and garlic. Other popular soups are Fasùj e uardi, a barley soup with beans and pork, and the polenta and spinach soup called Paparot.

Polenta is one of the staples of Friuli cuisine.  Made of corn meal, its antecedents are the Roman porridges made with barley and other grains. It’s served both grilled as an accompaniment to other dishes or can be a meal in itself when made with cheese and accompanied by a flavorful sauce. A variety of potato-based gnocchis are also popular, especially in Southern Friuli. Another popular pasta dish is Cjarsons, a dumpling made of potato, cinnamon, raisins and herbs; it’s served at the elegant Castello di Spessa wine resort and pairs particularly well with the fruity but dry Ribolla Gialla.  Barley risotto, or orzotto, like the one we had at Elda Felluga’s Terra & Vini osteria in Brazzano is made of fresh-picked hops.

Located close to the Adriatic sea, a wide variety of fish and seafood is available in Friuli, and, of course, they pair perfectly with the bright white wines of Collio.  One of our favorite dishes is Brodetto di Pesce. This is a tasty white fish stew that’s often served with polenta.  Of course, there’s plenty of fresh seafood, too, like the fresh Adriatic prawns (shown here) we had at Vineria Venco in Dolegna.  Collio Bianco and Sauvignon are both excellent pairings with seafood. 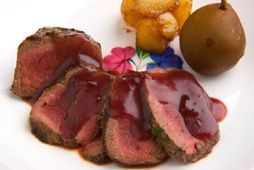 A variety of meats and sausages grilled in a fogolar, a conical shaped fireplace, are especially popular. Stewed meats, like the beef and pepper gulasch are also commonplace and frequently served with polenta.  Venison is cooked in a variety of ways, including roasted in blueberry sauce, like the one shown here that we had at La Subida. It paired well with a fruit-driven Refosco dal Peduncolo Rosso. 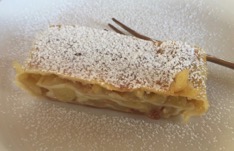 Strucolo is this region’s equivalent to Austrian strudel. It’s a thin layer of dough rolled around a filling, either sweet or savory. Shown here, the delicious apple strudel made by Roberto xx’s mother, which we enjoyed at the winery.

Another local dessert is Gubana, a brioche-like rolled cake filled with grappa-drenched dried fruit and nuts with a dusting of cocoa powder; it’s traditionally served at Easter.

Montasio is a cheese first made in the 13th century by monks in the Moggio Udinese Abbey, located in the high plain of Montasio. It later spread throughout Friuli. The cheese was given DOP status in 1986, meaning its production is regulated by law. Made from raw milk, the cheese is made in large wheels. It is sold both fresh and aged as long as 18 months. Montasio Fresco is aged 60-120 days and is smooth with a creamy flavor. Both the taste and texture become more intense over time. Fresh or lightly aged Montasio is used to make frico, either the soft version which is similar to a frittata and made with potatoes, onions and bacon or the crunchy, wafer-like version made by frying thin slices. Fresh Montasio pairs well with a white like Pinot Bianco, while aged cheeses do better with a red like Refosco dal Peduncolo Rosso.

Cheese, of course, is often the preferred way to end the meal, and if it’s Friuli, the cheese must be Montasio [see box].

Finally, one should consider having one of Friuli’s wonderful dessert wines, Picolit or Verduzzo, in lieu of dessert or to accompany strongly flavored cheeses with nuts.