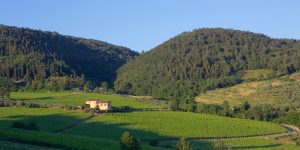 I Veroni is one of the premiere wineries of the Chianti Rufina appellation. We review the latest releases and a vertical of the I Veroni Reserve.

Lorenzo Mariani is the 4th generation of his family to manage the 70 ha I Veroni estate, located just a few kilometers east of Florence. His grandfather Umberto began bottling and selling his pure Sangiovese wine in 1957; Lorenzo began his involvement with the winery almost 40 years later, in 1996. With the assistance of enologist Andrea Paoletti, Lorenzo replanted 20 ha of vines and introduced organic viticulture, which was certified in 2013.

I Veroni has two principal vineyard parcels, both planted in the 1990s to a density of 5500 vines/ha on pebble rich limestone soils. The parcel that provides the fruit for the regular Chianti Rufina has a 30% gradient with elevations 150-250m. The 3 ha St. Martin in Quona vineyard parcel that provides the fruit for the Riserva is less steep but is at a higher altitude reaching 350m.

I Veroni also has a large farm residence, Podere Pianottolo, which used to house shareholders until that practice was abolished in 1973. Today it offers lodging for tourists who wish to wish to stay in the countryside while visiting the Florence area.

Andrea Paoletti, the creator of Tignanello and the enologist behind wines like Ornellaia, Valdicava, Tolaini, and others, joined I Veroni in 2009 as agronomist and winemaker.

The regular I Veroni Chianti is a blend of 90% Sangiovese and 10% Canaiolo and Colorino fermented on the skins in stainless steel for a maximum of ten days and aged in 25hl Slavonian oak casks for a year.

The I Veroni Chianti Rufina Riserva is all Sangiovese fermented in rainbow colored concrete tanks (see photo) for 15 days and then racked to Slavonian oak casks for malolactic fermentation, followed by about 18 months in used French oak barriques of various sizes. We tasted three different vintages of the Riserva: 2011, 2012, and 2013. 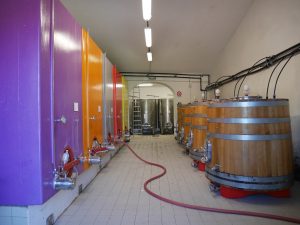 I Veroni 2014 Chianti Rufina ($18) 89  A delightful, fun and quaffable wine showing red cherry, red and black raspberry and hints of underbrush and savory herbs. The wine has vivid acidity, fine tannins, and good balance. The wine reflects the 2014 vintage, which had a long, cool and often wet summer that was followed by mild temperatures in September resulting in wines of lighter weight than usual.

I Veroni 2013 Chianti Rufina Riserva ($35) 92  Fresh and dried dark cherry aromas with light hints of tobacco and earth. A silky, full mouthfeel gives a sense of refinement that carries through to a lingering finish where   underbrush notes come to the fore. Beautiful wine with fine tannins. The 2013 vintage had a mild, damp spring that was followed by low temperatures in the early summer, resulting in late budbreak and flowering. Warm weather in July and August was followed by cooler temperatures in late summer, delaying the harvest.

I Veroni 2012 Chianti Rufina Riserva ($35) 91  More savory and earthy than the 2013 vintage but with red cherry accents on the nose. A firm tannic backbone and good acidity run through the wine, finishing with particularly rich extract. The tannins are a bit gritty, but this wine is dense enough that another couple of years in bottle should only make it more harmonious and integrated. The 2012 vintage had copious rain in the spring months followed by a hot and dry summer until August when there was a big drop in temperatures followed by rain in early September, resulting in very slow ripening and relatively high acidity. The harvest was rain free and relatively uniform. Overall, a good vintage.

I Veroni 2011 Chianti Rufina Riserva ($35) 92  Gorgeous semi-opaque color with effusive aromas of black cherry, chocolate shavings, and spice. A silky smooth attack leads to a seamless, harmonious mouth feel, layered rich, ripe flavors, and firm, round tannins. Drinking beautifully now. While the wine shows ripe fruit, the acidity of the Sangiovese keeps it fresh and lively. The 2011 vintage started off cold, but the summer was hot and dry. An autumn heat contributed to early ripening, although it was followed by cooler temperatures that allowed longer hang time. A very good vintage.

The US importers are Jandell Selections of Syosset, New York, and Blicker Pierce Wagner Wine Merchants of Napa, California.