We recently traveled to diverse parts of Chile to learn what’s new in Chilean wine. We saw vineyards being planted in extreme locations, adventurous young winemakers experimenting with new grape varieties and winemaking techniques, and a Chilean wine industry that continues to expand and, now, produce premium and ultra-premium wines that compete with the best in the world. To find out more, read our just published Report #60 Chile’s Premium Wine Revolution which includes reviews of over 300 wines. Astounding things #1 – #4 are given below. We’ll update this blog on a regular basis until all ten are listed. 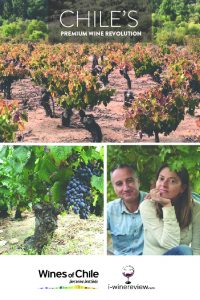 The Spanish settled Chile in the 16th century, bringing with them the grape variety called Pais, which is the same as the Mission grape of California. Chile is an isolated country, bordered by the Andes, the Atacama, the Pacific, and the Antarctic. This isolation has protected its vines from the wine world’s most evil grape pest—phylloxera, which destroyed Europe’s vineyards in the late 19th century. As a result, Chile has Pais grape vines that are hundreds of years old. Today many of these very very old vines have been grafted over to more popular varieties that are producing some of Chile’s (and the world’s) most distinctive wines. And recently vintners discovered 140 year old Malbec vines growing in the southern region of Bio Bio. The boutique winery Clos des Fous makes its Tocao Granito Paleozoico wine from these vines, and we highly recommend it. Chile also has old vine Carignan, Muscat of Alexandria, and other varieties. The Miguel Torres Cordillera Vigno Carignan is one of the best in Chile. Shown here: a 140 year old Malbec vine from Bio Bio, a vineyard of Carignan bush vines in Maule, and Daniella Gillmore and Andrés Sanchez of the Gillmore winery in Maule; Andrés helped found VIGNO, a group of Maule vintners dedicated to making classic wines from old vine Carignan. We look at Chile’s old vines in depth in our Report #60 Chile’s Premium Wine Revolution. We thank the winemakers at Gillmore, Miguel Torres, and Clos des Fous for showing us their wines. 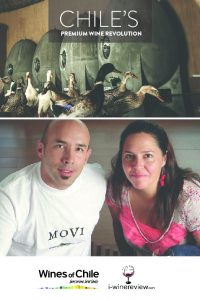 Chile has one of the world’s most concentrated wine industries with a high percentage of total production and exports provided by a small number of very large wineries including Concha y Toro, Santa Rita, and VSPT. Some of them have created special boutique winemaking operations that produce distinctive wines in limited quantities. Undurraga’s Terroir Hunter (TH) wines and Concha y Toro’s Terrunyo wines both do a superb job of showing Chile’s diverse terroir. Independent boutique wineries are flourishing, too. Felipe Garcia of Garcia+Schwaderer (shown here with his winemaking partner Constanza Schwaderer) currently leads an organization of boutique wineries called MOVI. Their Garcia+Schwaderer VIGNO Carignan from Maule is outstanding, and their Piedra Lisa Vineyard Garnacha is even better. These small wineries are often on the winemaking forefront, like the concrete eggs used at Montesecano winery. The Montsecano Refugio Pinot Noir is Burgundian in character and very reasonably priced. We put a focus on the emerging small wineries and boutique operations of larger wineries of Chile in our Report #60 Chile’s Premium Wine Revolution just published at www.iwinereview.com 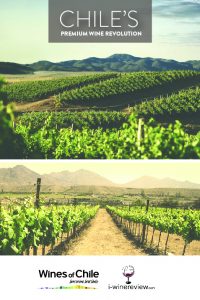 The Atacama desert is the world’s driest place, yet this is where Chile grows some of its best Sauvignon Blanc, Chardonnay and Pinot Noir. They grow in the river valleys that run from the Andes to the sea where cold winds and fog blow in from the Pacific’s Humboldt Current. These river valleys—Huasco, Elqui, and Limari—were all under the sea at one time, so they have some of the Western Hemisphere’s only calcareous soils. As a result, the wines show unique mineral like characteristics. We strongly recommend the Ventisquero Kalfu Sumpai Sauvignon Blanc from the Huasco Valley, Tabali Sauvignon Blanc from Limarí, and the Concha y Toro Marqués de Casa Concha Chardonnay from Limarí. Shown here: vineyards in the Huasco and Limarí river valleys. Read about the wineries and wines of the Atacama in our Report #60 Chile’s Premium Wine Revolution.

4. Chile’s wine grapes grow in some of the world’s most extreme terroir. 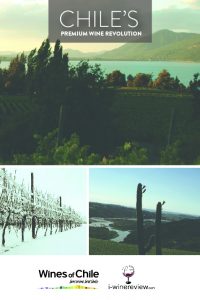 Great wines often come from vineyards located in the most marginal growing areas, and Chile is no different. One of the country’s most special Sauvignon Blancs—the Calyptra Sauvignon Blanc Gran Reserva—comes from a 1000 meter altitude vineyard (shown here in the snow) in the Andes foothills. And its best Syrah (De Martino Alto Los Toros Syrah) comes from a 2000 meter high vineyard in the upper reaches of the Elquí valley.

Laberinto makes outstanding Pinot Noir from the shores of Lago Colbún in Maule and Leyda makes its refined Pinot Noir Lot 21 from vineyards overlooking where the Maipo River meets the sea. And the best may be yet to come as growers like Cono Sur plant new vineyards in the far south in Bio Bio, Malleco, and even Patagonia. Cono Sur sources the grapes for its impressive Riesling from Bio Bio. We look at all these new, extreme growing areas in our Report #60 Chile’s Premium Wine Revolution.

5. Wine production in Chile has doubled so far this century, but Chileans aren’t drinking more wine. Where does it all go? 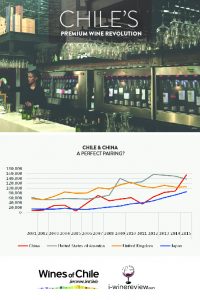 Chile has the lowest annual wine consumption among major wine producing and exporting countries. Chileans consume just 18 liters per capita, compared with 42 in Italy and 45 in France. So where does all the wine go? It’s exported, and Chile is now the world’s 4th largest wine exporter by volume. China is one important, growing market. But Chileans are also becoming more sophisticated wine consumers, witness the restaurants in Santiago with impressive wine programs, like Bocanáriz (shown here), Baco Vino y Bistro in Providencia, and Bistro Kilometro 0 in Las Condes. Our Report #60 Chile’s Premium Wine Revolution presents the latest information on Chile’s production and exports.

6. Chile produces (and sells) more Cabernet Sauvignon than the US. 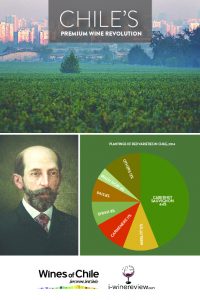 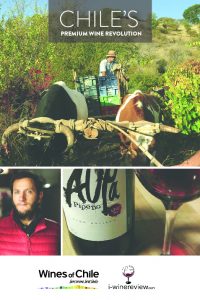 Traditionally, Chilean wine was made naturally, without preservatives or additives, and, given the unsanitary winemaking methods of the past, had to be drunk young. Wine is still made this way in the remote, rural parts of southern Chile, but modern winemakers strive to make good quality wine that meets modern sanitary standards but follows natural winemaking techniques. They use horses and oxen for cultivation, harvest by hand, and make their wine using naturally occurring yeast and bottle using the barest minimum of sulfites. Louis-Antoine Luyt (shown here), a disciple of the father of natural wine,   of Beaujolais, is one of the modern pioneers of Chilean natural wines. But other wineries, like De Martino, Maitia, González Bastias, and Miguel Torres are also making their wines as naturally as possible. We especially like the Maitia Aúfa, a refreshing, Beaujolais-like red wine made from 120 year old Pais grape vines grown in Maule. We talk about this more in our Report #60 Chile’s Premium Wine Revolution.

8. Which Bordeaux grape that grows better in Chile than France? 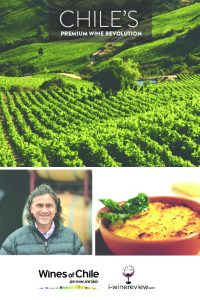 Carmenere, a Bordeaux grape variety that never did well in the cold, humid climate of that region, is now Chile’s third most widely planted red variety, and the plantings continue to grow. It is a variety that’s well adapted to the long, moderate growing season found in parts of Chile, especially vineyards of the Apalta region (shown here) of Colchagua. The Maquis Viola is an outstanding Carmenere, made with the assistance of two Frenchmen—Xavier Choné and Eric Boissenot. Santa Rita’s Pehuen Carmenere and Apaltagua’s Grial Carmenere, both from Apalta, are two other exceptional wines. The Grial is made with the assistance of Chile’s most prominent biodynamic winemaker, Alvaro Espinoza (shown here). But there are many more, and we talk about them in depth in our Report #60 Chile’s Premium Wine Revolution. We also talk about how well Carmenere pairs with both international and Chilean dishes, like Pastel de Choclo. 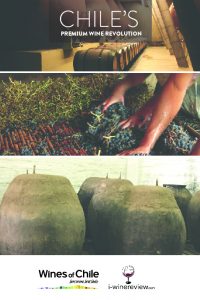 Before the advent of French oak barriques, stainless steel tanks, and the modern wine press, wine in Chile was made by hand. Grapes were picked by hand and pressed by hand using a zaranda, which separated the berries from the stems. The partially crushed berries then fermented in a process not unlike the semi-carbonic maceration found in Beaujolais. Traditionally, they fermented and were aged in large clay pots called tinajas. Today, these traditional winemaking methods are being updated by some of Chile’s most adventurous and creative winemakers. González Bastias in Western Maule uses the zaranda (shown here) and other traditional methods to make truly authentic Chilean wine from the Pais grape. We especially liked the González Bastias 2010 Mattoral Pais. Winemaker Marcelo Retamal at Viña De Martino has scoured the countryside to find 100+ year old, large clay tinajas that he now uses to make traditionally styled wines. His De Martino Gallardia Old Vine White, made mostly from Moscatel, is one of the most exciting discoveries of this report. And Pablo Morandé and his son Pablo Morandé Desbordes have created an enlarged, modern version of the tinaja at their Casablanca winery. Their Bodegas RE Renace Carignan, perhaps our favorite wine of the 300 we tasted in Chile, is made in these tinajas using ambient yeast and no temperature control. Read our wine reviews in Report #60 Chile’s Premium Wine Revolution. 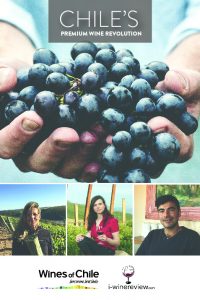 These young winemakers are trained in Chile’s best enology programs at the Universidad de Chile and the Universidad Católica and elsewhere and have international winemaking experience in places like New Zealand, Australia, the US and France. A surprisingly high proportion of them are women, and they’re beginning to crack the glass ceilings at Chile’s large wineries as well as lead the winemaking operations of smaller wineries. Viviana Navarrete, lead winemaker at VSPT’s Leyda winery is just one example. We loved her Leyda Pinot Noir Lot 21. Andrea León, winemaker at Lapostolle is recognized as one of Chile’s most innovative and talented winemakers today. Her Lapostolle Clos Apalta is one of Chile’s outstanding Carmenere blends. Felipe Marin of Casa Marin is another outstanding young winemaker with experience making wine in New Zealand and Sonoma. His Casa Marin Syrah Litoral Vineyard ranks among the best of the New World. We present many more of Chile’s exciting young winemakers in our Report # 60 Chile’s Premium Wine Revolution.