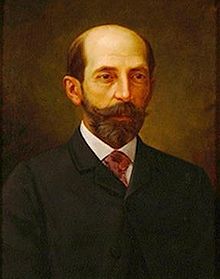 First made in 1987, Don Melchor is Chile’s original icon wine. We recently tasted several vintages between 1988 and 2013 as part of our research for Report #60 Chile’s Premium Wine Revolution.  The surprising results of the tasting are given at the end of this article. The wines were tasted at the Concha y Toro estate in Pirque in the Maipo Valley and at our offices in Washington DC.

Concha y Toro created Don Melchor in 1987 from its 700 m high Puente Alto vineyard, naming it after Don Melchor de Concha y Toro, who planted French varieties in the Maipo in the 19th century. The vineyard is located near the Maipo River with stony soils that provide excellent drainage. The site is also known for its large diurnal temperature variations during the growing season.

The vineyard that produces the fruit for Don Melchor has a rich history[1]. In the mid 19th century, Manuel Antonio Tocornal planted French varieties—Cabernet Sauvignon, Malbec, Pinot Noir, and others—on his estate in the Alto Maipo called Mariscal. In 1942, Alfonso Chadwick, father of Eduardo Chadwick, owner of today’s Errazuriz winery, purchased the Mariscal estate and planted about 400 hectares of Bordeaux varieties and produced a wine called Tocornal Fond de Cave. Concha y Toro purchased most of this vineyard from the Chadwick family in 1968, and since 1987 it has provided the fruit for Don Melchor. [Today, the original Tocornal vineyard provides the fruit for Don Melchor, the Amelia Chardonnay, and Viñedo Chadwick.] 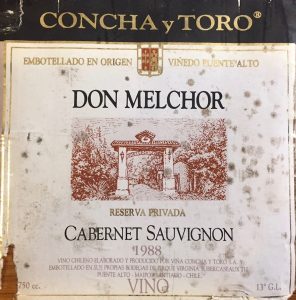 Today, the Don Melchor vineyard is divided into 7 blocks of Cabernet Sauvignon and 1 of Cabernet Franc, and each block is divided into parcels of 1 ha or less, resulting in 142 different lots, each of which is harvested and vinified separately. The winemaking is traditional, and elévage is done in mostly new French oak, with the percentage of new oak decreasing in recent years. The 1987 Don Melchor was the first Concha y Toro wine to be aged in French barriques. After aging in barrique, Concha y Toro sends about 150 vials from the different lots to Bordeaux where Eric Boissenot does the final blend. Eric’s father, Jacques Boissenot, helped define and blend Don Melchor beginning with the first vintage in 1987.

The making of Don Melchor has changed over time. From 1987-89, grapes were fermented in raulí wood foudres; from 1990 only stainless steel was used. The first vintages were all Cabernet Sauvignon, but later Enrique Tirado introduced Cabernet Franc to the blend. The oak regime has remained relatively constant, rising from 12 months in 60% new French oak in 1988 to 15 months in 76% new oak in 2010 and back down to 15 months in 66% new French oak in the most recent vintage, 2013. Perhaps the most notable difference over time is the level of alcohol: ranging from 12.2% in 1993 to 14.8% in 2008; recent vintages have been about 14.5%.

These are very different vintages. The 1988 vintage was an unusual, wet El Niño year, while1993 vintage was normal in most respects; 2008 was relatively dry and hot, 2010 was relatively cool, 2012 was very warm, and 2013 was the coldest vintage ever for Don Melchor.

The US Importer of Don Melchor is Excelsior Wines. 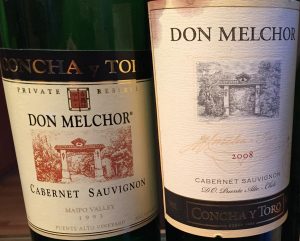