Last year we had the opportunity to taste a selection of fine Bulgarian wines imported to the U.S. by Parallel 43 of Alexandria, VA. Impressed by the quality of the wines and their modest prices, we agreed to taste a new and expanded selection mainly featuring vinifera varietals and blends.

Bulgarian wines are under the radar screen of all but a few wine enthusiasts in the US. This is mainly because the wine industry has had a long checkered history, It performed poorly under Soviet rule, which gave priority to quantity over quality. However, today with help received from the European Union,  it operates under a free market economy which has nurtured a new generation of producers crafting wines of quality and originality. These wines like Parallel 43 are beginning to attract attention in global markets because of their quality and attractive prices. 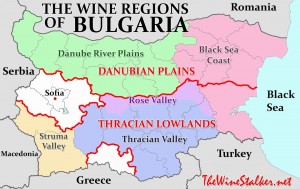 The wines reviewed here are sourced from the Danubian Plains region. This region encompasses the south banks of the Danube and the central and western parts of the Danubian Plain. Continental in character, the region has around 30% of the country’s vineyards and produces 55% of all white wines. The grapes grown here include both vinifera and indigenous varieties.

Parallel 43 2014 Pinot Noir Trianguli Danubian Plain ($10) 88  The Pinot Noir Trianguli displays a dark ruby color and aromas of fragrant black cherry and plum. On the palate it reveals dried black cherry fruit flavors, high acidity, and a persistent finish. An atypical Pinot Noir. Parallel 43 2013 Gamay Noir Danubian Plain ($12) 87  The Gamay Noir offers ripe dark plum and earthy aromas and flavors with light medicinal notes and a modest finish.  Quite distinct from Beaujolais.   Parallel 43 2014 Canyon Guards Rubin Danubian Plain ($12) 90+ The Canyon Guards Rubin is a tasty blend of Nebbiolo and Syrah. It is rich and densely flavored with blackberry. black pepper, and red cherry. The wine is highly concentrated and beautifully balanced with lots of spice, firm tannins and a persistent finish. Great value.  Parallel 43 2010 Dux Danubian Plain ($22) 91 The Dux is a delicious blend of Cabernet Sauvignon and Merlot. Sourced from 60 year-year-old vines it is medium-bodied with a silky texture, and good acidity. Although kept in barrel for 5 years, it reveals overall freshness and is perfectly balanced with good acidity and a persistent finish.  Parallel 43 2013 Canyon Guards Cuvée Canyon Park Bulgaria ($12) 88  A blend of Merlot and Bulgarian Rubin, the Cuvee Canyon Park offers tasty ripe red berry fruit flavors on the palate. It is nicely concentrated with a soft round texture, firm tannins and a long finish.  Parallel 43 2012 Maxima  Danubian Plain ($15) 90 The Maxima is a delicious Bordeaux blend of Cabernet Sauvignon, Cabernet Franc and Merlot, Medium ruby in color, it reveals flavors of dark berries with a hint of earth. Aged in barrels 24 months, it has a silky mouth feel, medium weight, firm round tannins and a long finish.  Parallel 43 2013 Sensum Danubian Plain ($15) 88+  A blend of Cabernet Sauvignon and Merlot, the Sensum offers aromas of blackberry and earth. On the palate it has good density, and aged in barrels for 30 months, it reveals earthy dark fruit flavors, and a persistent finish. Parallel 43 2013 Canyon Guards Cuvee Pepper Garden ($15) 89 The Cuvee Pepper Garden is an attractive blend of Cabernet Franc and Bulgarian Thracian Mavrud. It has a silky peppery attack with flavors of dark red berries and earth. It is nicely concentrated with a soft texture, firm round tannins, and a long finish.

This entry was posted in Bulgaria, Uncategorized. Bookmark the permalink.