To Kalon is Napa Valley’s most famous, historical vineyard, and it produces some of California’s most outstanding wines, including several Robert Mondavi wines and Opus One. In this article, we review a selection of wines from Mondavi’s To Kalon vineyard. These wines from this special vineyard are not only very good drinking, they’re also excellent values.

The To Kalon Vineyard was originally planted in 1868 by Napa pioneer Hamilton Crabb. Today Robert Mondavi owns 498 acres, Opus One owns 83 acres, the UC Davis Oakville Station owns 20 acres, and Andy Beckstoffer owns the remaining 89 acres (the former Beaulieu Vineyard #4) of the original To Kalon. To Kalon is often anointed as Napa Valley’s premiere vineyard, and the grape prices reflect that. Mondavi, of course, doesn’t sell its grapes, but Beckstoffer does, and in 2014 he began charging a minimum of $18 thousand per ton or 175 times the bottle price per ton of Cabernet Sauvignon, whichever was higher. In other words, the cost of grapes alone is over $100 per bottle, and many of Beckstoffer’s clients charge well above that. This makes the Robert Mondavi To Kalon Cabernets tasted here a relative bargain. 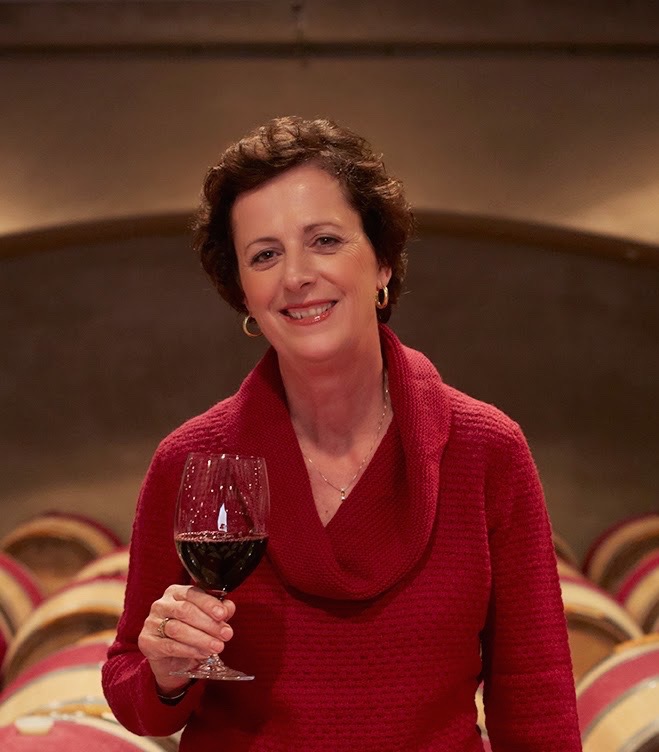 Geneviève Janssens, a 1974 oenology graduate from the University of Bordeaux, is Director of Winemaking at Robert Mondavi Winery. She was previously Director of Production at Opus One Winery.

Thanks to Folsom and Associates for providing samples.

Robert Mondavi 2013 Fumé Blanc Reserve To Kalon Vineyard Oakville Napa Valley ($50) 92 The 2013 Fumé Blanc is a superbly balanced, vibrant Sauvignon Blanc. Grapefruit, flint and a hint of nettles show on the bouquet. The palate is stony and dry with firm acidity and an intense quality. Beautifully integrated with a rich persistence of fruit and minerals on the finish.

Robert Mondavi 2012 Cabernet Sauvignon Reserve To Kalon Vineyard Oakville Napa Valley ($155) 95 Classic To Kalon Cabernet showing both elegance and power in a flavor-packed wine of dark fruit, cedar, spice and a hint of mocha. The tannins are present but supple. Still it would be a shame to drink this wine without a few years bottle age. Aged 20 months in all new French oak. A blend of mostly Cabernet Sauvignon with Cabernet Franc and Petit Verdot. Made from selected blocks of the To Kalon Vineyard.

Robert Mondavi 2012 Cabernet Sauvignon Oakville Napa Valley ($60) 91  The Oakville Cabernet is a polished wine showing cassis and blackberry fruit and espressso framed by fine French oak. It has a silky smooth mouth feel and very firm tannins. If drunk now, we suggest decanting. Better yet, set aside for a couple of years before opening. Matured in 75% new French oak for 21 months. A blend of 75% Cabernet Sauvignon, 12% Cabernet Franc, 6% Malbec, 4% Petit Verdot, and 3% Merlot sourced from the To Kalon Vineyard.

Robert Mondavi 2012 BDX Oakville Napa Valley ($65) 91-3 With a higher percentage (91%) of Cabernet Sauvignon than the Oakville Cabernet, the BDX appeared to be going through a dumb stage at the time of tasting, just a few months after bottling, as it was reticent on the nose and relatively closed on the palate and showed firm tannins. The wine has potential—it’s big and soft on the attack and has a smooth mouth feel, but we strongly recommend putting it away for at least a year before consuming. A blend 91% Cabernet Sauvignon, 8% Cabernet Franc, and 1% Petit Verdot aged 28 months in 55% new French oak barriques. Predominantly sourced from the To Kalon Vineyard.