The Best Palo Cortados from Sherry 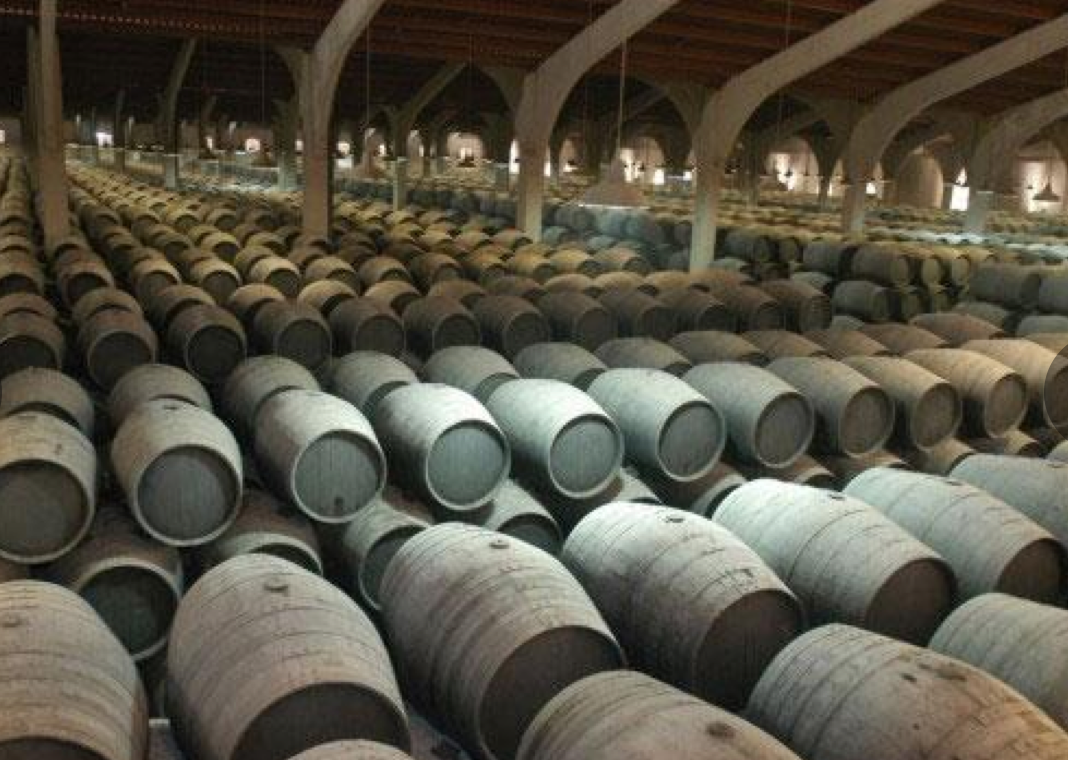 Sherry is one of the world’s most complex wines, made in a unique way similar in respects to Champagne. The Sherry soleras yield a consistent house style, much like a non-vintage house Champagne. It’s also one of the world’s most special, old wines with soleras dating back a hundred years or more. This month we published a Tenth Anniversary Special Report #52 titled The Best of Sherry, which profiles our favorite producers and reviews their best wines, from the dry Finos and Manzanillas to the unctuous, sweet Pedro Ximénez. Perhaps our favorite wine style lies between these two extremes—the dry and often very elegant Palo Cortado. In this article, we highlight the most highly-rated Palo Cortados tasted for The Best of Sherry report.

Palo Cortados are wines of great complexity, combining the delicate bouquet of an Amontillado with the body and palate and color of an Oloroso. Ranging in alcohol levels of 17-22%, they are chestnut to mahogany in color with a bouquet reminiscent of bitter orange and lactic notes suggestive of fermented butter. They have a rich texture, with smooth, delicate aromatic notes re-appearing in the aftertaste, leading to a delicious and lingering finish. Palo Cortados are rare natural occurrences—for reasons not yet known, Palo Cortados begin life selected to be Finos, but fail to develop the flor layer in the Solera. So, they age oxidatively like an Oloroso, and the resulting wine is a hybrid.

Want access to our in-depth reports and wine reviews on Sherry and other regions worldwide? Become a subscriber today.
Subscribe Now

Aecovi Jerez Sociedad Cooperativa Aecovi was established in 1989 to bring together four cooperatives located in Jerez: Nuestra Señora de las Angustias (Jerez), Católico-Agrícola (Chipiona), Unión de Viticultores Chiclaneros (Chiclana) and Covisán, of Sanlúcar de Barrameda. In numbers, Aecovi brings together 1,200 small grape-growers, which is close to 20 percent of all vineyards in the Sherry Triangle. Aecovi began marketing its own wines under the Santiago brand in 2008. Santiago is imported by Quality Wines of Spain.

Aecovi NV Santiago Palo Cortado ($16/375ml) 92 Hints of vanilla cream, toasted nuts and orange marmalade show on the nose of this lightly colored Palo Cortado. The nut character and a note of golden raisins shows on the palate with nice, long-lasting orange zest and toffee notes on the finish.

Bodegas Barbadillo Managing the largest bodega in Sanlucar de Barrameda, the 7th generation of the Barbardillo family owns it’s own 500 ha of vineyards in Jerez Superior and controls its own viniculture, viticulture, bottling and distribution to over 50 countries. Its offices are in the La Cilla palace in Sanlucar, and the estate has over 500 hectares of vines. Montse Molino is the enologist. Under founder Benigno Barbadillo Hortigüela, this bodega was the first (in 1827) to name and bottle Manzanilla. Today, it’s the largest producer of Manzanilla in Jerez. The Manzanilla en Rama spends 8 years under flor and is bottled four times a year, with the Primavera being the most assertive. Sherries from Barbadillo’s Reliquia range (not tasted here) are extremely old (>100 years), very expensive, and rare. Importer: New Age Imports, Grape Expectations

El Maestro Sierra   Founded in 1832 by José Antonio Sierra, El Maestro Sierra is today owned by Pilar Pia Pechovierto, a widow whose husband was a direct descendant of Sierra. El Maestro Sierra’s capatazes are Ana Cabestrero (shown here) and Juan Clavijo. Their close proximity to the ocean at El Puerto de Santa Maria allows the flor to be present all year round. They purchase grapes from the same growers with the best and oldest parcels within Jerez Superior. They have some of the oldest soleras in Sherry. Importer: De Maison Selections

El Maestro Sierra Palo Cortado ($110/375ml) 92 Medium amber. Shows a refined nose of oranges and dates with an espresso accent. The aromas carry over to the palate with its lovely creamy texture. Delicious. Sourced from 4 barrels estimated to be over 70 years old.

Bodegas Rey Fernando De Castilla Founded in the 19th century, this Sherry house was purchased in 1999 by Norwegian born Jan Pettersen, who worked 15 years at Osborne, and a group of investors who have put the focus on quality. This bodega has elected to not use VORS to designate its old sherries, most of which are marketed under the Antique label. Importer: Valkyrie

Fernando de Castilla Antique Palo Cortado ($45/500ml ) 93 Amber-copper. Showing a complex mélange of toasted almond, vanilla-caramel with hints of tangy orange and leather, this is a densely flavored Palo Cortado with complex aromas and flavors. Has a very persistent finish. The average Solera age of this wine is over 30 years, so it is technically a VORS.

Gonzalez Byass Founded by Manuel Maria González in 1835 at the age of 23, the first barrels were exported to London in 1844. Today the firm is still owned by the González family, which owns over 800 ha of vines in the Jerez Superior and is the largest producer in Jerez. It is the only winery to have Pedro Ximenez vines planted in Jerez. It is best known for its Tío Pepe Fino, which has been sold since 1844. Gonzalez Byass also has a large number of vintage-dated sherries. Importer: Vin Divino

Lustau Tracing its roots back to 1896 when it was founded by José Ruiz-Berdejo, Lustau now operates its Sherry business from a centralized and modern bodega in Jerez. The company produces a full range of Sherries, including those of alchemistas, small, independent producers. It occasionally releases single-vintage Sherries and also began marketing a line of VORS Sherries in 2010. We reviewed a large number of Lustau Sherries in our earlier report. Importer: Europvin/Michael Skurnik

Osborne The 7th generation of the Osborne family now controls the Osborne Group portfolio of companies. The company was first established by Thomas Osborne Mann in 1804. They make three levels of Sherry, the top being Osborne Rare Sherries. The dates in parentheses in the wine titles are the years when the solera was created. Importer: WJ Deutsch & Sons

Bodegas Tradición   This is a young bodega, established in 1998, but it owns some of the oldest soleras of Jerez, and its product line is almost exclusively old VORS classified wines. The soleras include 18th century wines bought from Agustín Blazquez and 19th century soleras from Alfred Gibey, Delgado Zuleta, and other bodegas. José Ignacio Domecq purchased the wines and created Tradición’s house style. The current owner is Joaquín Rivera, descendant of one of the oldest bodegas, Bodega CZ – JM Rivero, which dates from 1650. The winemaker is José Maria Quiros. Importer: Valkyrie

Bodegas Tradición Palo Cortado 30 Years VORS ($145) 95 The VORS Palo Cortado is one of the most refined Sherries tasted for this report. It shows a fabulous nose of rich milk caramel, red cherry and orange zest and has a sumptuous creamy attack leading to a finely-honed, balanced and integrated palate. Finishes on a bright, tangy note. The solera has an average age of 32 years. RS 4 g/L

Valdespino The Valdespino family dates its presence in Jerez from 1264 when the knight Don Alfonso Valdespino was awarded land in Jerez for capturing the city from the moors. In 1999 the family sold its ancient soleras to Grupo Estévez. We tasted a wide range of the Valdespino sherries for our earlier report Introduction to Sherry, including the magnificent Fino Inocente, the Coliseo Amontillado, the Solera 1842 Oloroso, the Cardenal Palo Cortado, and the Niños Pedro Ximénez. For this retasting, we focused on some of the wines we missed previously. Under the benevolent guidance of Grupo Estévez, Valdespino has confirmed its reputation as one of the very finest Sherry houses. Importer: The Rare Wine Co.

The International Wine Review celebrates its tenth year of publication in 2015. To celebrate, we revisit many of the regions we’ve reported on over the past decade. Our focus in this series of special reports and articles is our favorite producers and their wines.

This entry was posted in Countries and Regions, Fortified, Spain, Uncategorized and tagged jerez, Palo Cortado, Sherry. Bookmark the permalink.