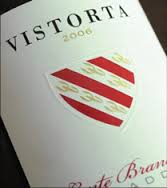 week we had the rare opportunity to taste five vintages of  Vistorta Merlot from 1999 to 2007.  The tasting was organized by proprietor Conte Brandino Brandolini and importer Esprit du Vin.  It was held at Restaurant Fiola in Washington, DC one of the capital’s finest restaurants.

Brandino Brandolini is an old friend of ours.  We first met him in DC over five years ago and have maintained regular contact with him during our visits to Venice.   On those occasions we have met him at his Bar Naranzaria,  his  intimate  restaurant located  along side the Rialto Bridge  where we tasted his delicious wines with Venetian food.   While we regularly enjoyed  his other wines from Friulano and Refosco, produced in nearby Treviso,  it was the Vistorta Merlot that generated the most excitement.

The Vistorta Merlot is produced from 15 hectares of Brandino’s  500-acre family estate.   During the past several decades  Brandino has implemented many improvements on his estate including the planting of new Merlot clones from Bordeaux and a system of high-density planting on clay and limestone soils.  He also adopted organic practices beginning in 2006  that are resulting in further improvements in his wines.   Brandino had blended small amounts of Bordeaux varieties in Vistorta over the years, but the focus as always remained on Merlot.  The wines are aged in new and used barriques for about 12 months and are bottle aged until he believes they are ready for market which is usually 3-4 years after the vintage.

Want access to our in-depth reports and wine reviews on Italy and other regions worldwide? Become a subscriber today.
Subscribe Now

This vertical tasting revealed Vistorta in a new light.  Having tasted the younger fruit forward vintages, we had no idea how the older vintages would age and we were pleasantly surprised.  As our tasting notes reveal, the wines are aging beautifully and gaining considerable complexity.  They are also showing excellent tannic structure, good acidity and persistence.    We kept thinking how wonderful these wines would be with mushroom risotto, truffles and other earthy and savory dishes.   However, we also enjoyed them with Fiola’s offerings of Burrata of Buffalo Mozzarella and Pesto,  Seared Beef Tenderloin with wild mushrooms, Sardinian Ricotta Cavatelli, grilled Branzino and artisanal cheeses.

Vistorta Merlot 2007 ($23).    This is  a wine we tasted previously.  It was the most fruit forward of the wines reviewed here,  offering  rich red fruit aromas and licorice on the nose with nicely integrated plum, black cherry fruit and French oak on the palate.  It has good fruit concentration and firm tannins with hints of chocolate on the finish.

Vistorta Merlot 2006 ($23).   This vintage of Vistorta exhibits a brooding character on the nose.   It is less fruit forward than the 2007 and the body is somewhat lighter weight.  However, the flavors are intriguing with notable earthiness, excellent acidity and a long finish.  Among our favorites of the tasting.

Vistorta Merlot 2005 ($23).  This was a rainy vintage and the wine reveals a loamy, earthy wild character.  It has good acidity and tannic structure, it is elegant on the palate with good persistence.

Vistorta Merlot 2004  This vintage was surprisingly fruity with hints of licorice, earth, herbs and green pepper.  A complex and delicious wine and among our favorites.

Vistorta Merlot 2003.   The hot 2003 vintage is revealed in the opaque color, lush and big and plumy flavors and soft texture.  There is some good acidity here, but this wine is for drinking now.

Vistorta Merlot 1999.  This is an elegant and earthy wine which may even have an attractive note of brett.  It is a blend of Merlot, Cabernet Franc and Syrah.  It was a cool vintage resulting in somewhat austere wines.  However this one is savory and perfect for earthy dishes.

This entry was posted in Italy, Red Wine, Uncategorized and tagged Featured. Bookmark the permalink.