Hickinbotham Clarendon Vineyard is one Australia’s iconic vineyards.  It was established by Alan Hickinbotham in 1971 in McLaren Vale, and over the years has been the source of fruit for some of Australia’s finest wines including Penfolds Grange and Hardy’s Eileen Hardy. We review the 2013 releases, the second release since the Jackson Family Wines’ purchase of Hickinbotham in 2012.

After its purchase of this historic, 200 acre property, Jackson Family Wines launched a major revitalization of the vineyard that included reducing yields (Merlot) and improving pruning and canopy management.  Winemakers Charlie Seppelt and Chris Carpenter were teamed up to lead the project.  Charlie’s winemaking experience includes Torbreck and Wolf Blass in Australia, Jean-Louis Chave in the Rhone and wineries in New Zealand and Napa Valley.  Chris Carpenter is the winemaker for such prestigious labels as Cardinale, Lokoya, La Jota and Mt. Brave and is based in Napa Valley.

We recently had the opportunity to taste the new 2013 releases of the Hickinbotham Clarendon Vineyard in McLaren Vale with winemaker Charlie Seppelt and Kristen Reitzell of Jackson Family Wines.  The 2013 vintage was challenging due to high temperatures and low rain fall.  However, the four wines reviewed here showed very well, offering rich and concentrated aromas and flavors, good texture and mouth feel, firm silky tannins,  overall balance and excellent length.  Wines of elegance, power and refinement, they are approachable now but will provide drinking pleasure for a decade or longer.

Want access to our in-depth reports and wine reviews on all regions worldwide? Become a subscriber today.
Subscribe Now

Hickinbotham 2013 Merlot Revivalist McLaren Vale ($75) 92  The 2013 Merlot Revivalist exhibits excellent intensity and richness of flavor. It is ripe and spicy on the palate offering dark berry fruit, excellent balance and good structure. Aged 15 months in 20% new French oak, it is nice and fleshy with firm round tannins and a persistent finish. Only 238 cases made.

Hickinbotham 2013 Cabernet Sauvignon Trueman McLaren Vale ($75) 91 The 2013 Cabernet Sauvignon Trueman is moderately aromatic and exhibits black currant and blackberry fruit and earthy flavors with firm round tannins on the mid-palate. It has good density of flavor and over all structure, excellence balance and a long tannic finish. 775 cases made. 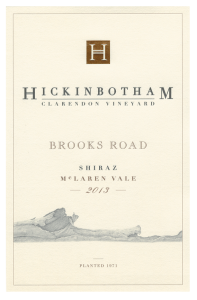 Hickinbotham 2013 Shiraz Brooks Road McLaren Vale ($75) 92+  The 2013 100% Shiraz Brooks Road displays rich and concentrated dark red berry flavors. It is soft and elegant on the attack with a palate of pure savory fruit, spice and richness. Aged 15 months in 33% new French oak, it is a gorgeous wine with good tannic structure and a long finish.

Hickinbotham 2013 Cabernet Shiraz The Peake McLaren Vale ($150) 96 The 2013 Peake is an extraordinary wine consisting of a blend of 57% Cabernet Sauvignon and 43% Shiraz. Opaque ruby in color, it is concentrated and elegant on the palate offering a seamless blend of glycerin rich dark fruit flavors. Sourced from the finest grapes of young and old vines of the Clarendon Vineyard, it is a wine of distinction.
October 2015