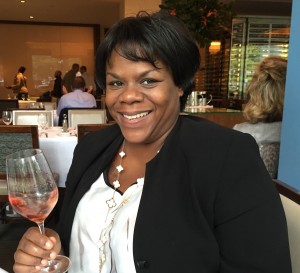 How do America’s top sparkling wines pair with food? This is one question we explore in our forthcoming report on America’s Sparkling Wines. To find out, we recently chose several top wines and invited the team at Charlie Palmer Steak in Washington, DC, to prepare a lunch with a selection of appetizers and entrees to accompany the wines. We were assisted in organizing the tasting by sommelier, Nadine Brown, who oversees a 6,000 bottle list that includes many fine American sparkling wines offered by the glass and by the bottle. How did the food and wines pair? 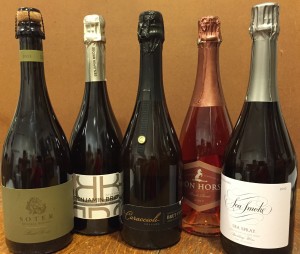 As we observed in our earlier report The World of Sparkling Wines and Champagne, all too often consumers regard sparkling wines as merely for special occasions rather than a wine to enjoyed with food. In fact sparkling wines are among the most versatile of wines offering dry, high acid, and lively mouth filling flavors to accompany food.   Moreover, many of the top cuveés and older vintage sparkers provide rich textures and complex flavors that are most enjoyable with intensely flavored dishes.

Sparkling wine is made throughout North America, from the Gaspereau Valley in Nova Scotia to New York’s Finger Lakes, Michigan’s Leelanau Peninsula, and, of course, up and down the West Coast. California, alone, accounts for 90 percent of all sparkling wine made in America, so it’s no surprise that many of the wines we selected for this tasting come from that part of the country. We also included an interesting new (to US consumers) wine from Nova Scotia.

The wines selected for the tasting are made in a variety of styles:

Our lunch started with a rich selection of appetizers including briny oysters on the half shell with jalapeño, mango mignonette, a terrine of pork shoulder with pistachios, hunter sausage with black pepper and fennel and other charcuterie and crudités. These turned out to be challenging dishes to pair with the wines: The two brut natures went reasonably well with the oysters, although we felt that these wines would pair even better with baked oysters or clams. The wine that paired best with the oysters was the very dry Benjamin Bridge 2008 Brut Reserve with its bright acidity. Another great match was the exquisitely perfumed Sea Smoke 2012 Sea Spray Blanc de Noir, which paired beautifully with the terrine of pork shoulder and its fragrant pistachios–a pleasant surprise since Sea Smoke’s Pinot Noirs are boldly flavored. 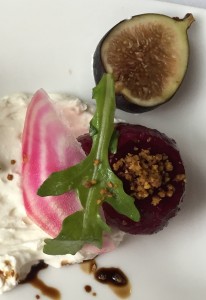 The next course featured roasted beets, feta cheese, black mission figs, and arugula with aged balsamic. This heavenly dish paired beautifully with several of the bruts, but the standout was the Carriccioli Cellars 2008 Brut Cuvée, a wine that was seamless with the beets due to its clean, crisp flavors and high acidity. Our second choice was the lovely Domaine Carneros Le Réve Blanc de Blanc.

For our entrées we began with a delicate agnolotti of sweet corn and ricotta with chanterelle mushrooms, lemongrass and baby radish–the restaurant’s vegetarian option. This rich and savory dish paired magnificently with several brut sparkling wines, but most notably with the Sokol Blosser NV Sparkling Rosé, which offered 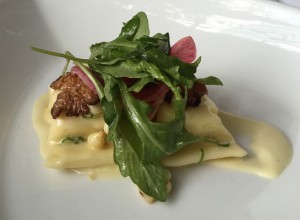 attractive and delicate flavors that complimented this savory dish.   Charlie Palmer offers other attractive entrées for sparkling wine such as Alaskan Halibut, Roasted Amish Chicken or Crab Cakes. However we selected their famous marinated Hangar Steak with Potato Gnocchi, black truffle and sweet corn.   Our goal here was to explore how well the top American sparkling wines paired with steak. 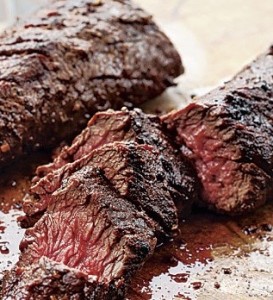 The rosé sparkling wines and the more complex and older sparkling wines were best suited for the hanger steak. On occasion, Charlie Palmer serves the Roeder Estate Rosé with steak, which we have enjoyed. However, the full-bodied Soter 2011 Brut Rosé with its rich dense flavors and the Iron Horse 2007 Brut Rosé with its complex aged notes are even better pairings. We had assumed that the magnificent and complex Schramsberg 1999 J Schram LD might enrich the steak, but were disappointed with the pairing. Instead, this sparkling wine is actually more suitable for richly flavored veal, pork, or quail. Our experience in pairing beef with sparkling wine has been mixed, and from this tasting we would probably have to conclude that big red wines are a preferred first choice for pairing with marinated hanger steak and other meats.

For our last course, we tried pairing the wines with several cheeses: Humboldt Fog, Upland Pleasant Ridge, and Cabot Cloth Bound Cheddar.  As in previous tastings we found that there are many premium sparkling wines that complement fine cheeses. The robustly flavored Iron Horse 2010 Brut X was the most versatile wine, pairing almost seamlessly with all the cheeses. We also liked the Thibaut Janisson NV Xtra Brut with its rich creamy texture, the Trump 2008 Sparkling Reserve and the Roederer Estate 2007 L’Ermitage with its chalkiness and rich complex aromas. While strongly flavored dishes can often overpower wine, these wines were ideal for the cheeses.

This tour de force tasting of top American sparkling wines should encourage readers to explore these and other sparkling wines that are being featured in the International Wine Review’s upcoming Report #53 American Sparkling Wine (November-December 2015).