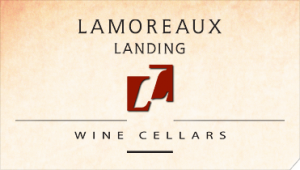 Lamoreaux Landing has rightfully won recognition as one of the best wineries in New York’s Finger Lakes Region. Founded in 1992 by Mark Wagner, it has won accolades from the beginning when its 1993 Chardonnay won a national competition. Today Lamoreaux Landing has 105 acres of vines on the eastern hillsides of Seneca Lake where they make a wide range of wines, including some delicious sparkling wines, which we tasted for our upcoming end of year report on American Sparkling Wine. 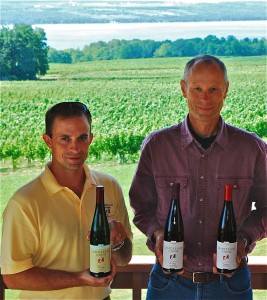 Lamoreaux Landing was a 19th century steamboat dock on Lake Seneca where fruit was loaded for transfer to railroad cars at Geneva. Mark’s father purchased the family’s first vineyard in 1949. Mark became manager of the vineyards in 1978 and shifted the vineyards from vitis labrusca to vitis vinifera. Its 20 year old block of Pinot Noir is one of the oldest on Lake Seneca. Josh Wig is now co-owner, and Colin Grant is winemaker. Annual production is about 10 thousand cases. Lamoreaux Landing has completed the requirements of VineBalance, New York’s Sustainable Viticulture program.

The first sparkling vintage for Lamoreaux Landing was 1990. The sparkling wines, separately fermented from 20 different vineyard blocks and later blended, are all made with estate fruit. They have a distinct, clean, bright style with understated fruit and a rich mousse.

Lamoreaux Landing 2007 Blanc de Blancs Finger Lakes ($30) 90  The Blanc de Blancs reveals a lovely, full bouquet of pear and apple with light leesy notes. It shows excellent balance and freshness in the mouth with understated flavors and good length. Well made and delicious!

Lamoreaux Landing 2013 Grüner Veltliner Finger Lakes ($20) 89 Nice bouquet of spice, herbs and stone fruit. The wine is soft and creamy on the palate with good minerality and subdued fruit. Finishes crisply and with good length.

Want access to our in-depth reports and wine reviews on the Finger Lakes and other regions worldwide? Become a subscriber today.
Subscribe Now

Lamoreaux Landing 2014 Gewürztraminer Finger Lakes ($15) 88 Beautiful tropical fruit and jasmine flowers show on the nose and carries over to the palate with notes of pineapple, lychee, and a touch of vanilla bean. There’s a touch of golden raisins on a persistent finish.

Lamoreaux Landing 2013 Pinot Noir Finger Lakes ($20) 89 This Pinot Noir is light and delicate enough to pass for a rosé, and that’s how we would drink it. It’s a lovely wine with light red cherry and herbal scents and a nice clean, pure light-bodied palate. The wine is well made, with good varietal character, and delicious to drink. Serve lightly chilled.