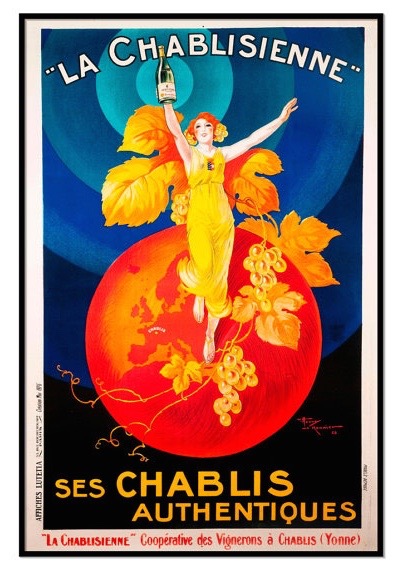 As part of the preparation for our upcoming report on Chablis, we recently sat down with Hervé Tucki of La Chablisienne at the winery in Chablis, to taste a significant proportion of its large wine portfolio, including Petit Chablis, Chablis, Premier Cru, and Grand Cru appellations.  La Chablisienne today has 227 grower-members farming 1,261 hectares of vines and producing about 25 percent of the total production of Chablis. Hervé is the son of Jean-Michel Tucki, who is responsible for putting La Chablisienne among the ranks of the best domaines of Chablis. About 70 percent of its total production is exported.

La Chablisienne’s jewel in the crown is its 7.2 ha parcel in Grenouilles, which accounts for a high percentage of that Grand Cru’s total vineyard plantings (9.7 ha). All told, La Chablisienne’s members have 14 ha of Grand Crus and 120 ha (18%) of the Premier Crus of Chablis. However, in terms of volume, its production is focused on Petit Chablis and Chablis, and we tasted five different Petit Chablis and Chablis with Hervé, as well as several Premier Crus and Grand Crus. New entries in the Petit Chablis and Chablis categories are the “Dame Nature” labels signifying grapes grown organically. Our tasting notes on the wines are given below. But, first, a little history.

The French cooperative movement was strong in the early 20th century, and difficult economic conditions led to the growers of Chablis creating La Chablisienne in 1923.  While the coop initially helped market the wines made by its members, after WW II it began making wine and purchasing must from the growers. For many years, it marketed its wine through negociants, but today almost all its wine is sold under its own label, La Chablisienne.  La Chablisienne is one of Europe’s best examples of a modern wine cooperative that puts the focus on the quality of its wines.

The Petite Chablis and Chablis are mostly steel tank fermented and aged, except for the Vielles Vignes that sees some oak. The Premier Crus and Grand Crus are all vinified and aged partly in oak (228L barriques), partly in stainless steel. All wines go through malolactic fermentation. US importers include Opici, Grape Expectations, Ruby Wines, Tryon, Brescome and Heidelberg. Not all importers bring in all wines. Wines not currently imported have no prices in the following notes.

La Chablisienne 2013 Dame Nature Petit Chablis 88 The 2013 Dame Nature is La Chablisienne’s first release of Petit Chablis made from organically grown grapes. The wine is clean and crisp and easy to drink with delicious citrus fruit and a light creamy texture.   Made from nine organically farmed parcels located in Fley and Préhy. La Chablisienne 2013 Pas Si Petit Petit Chablis ($19) 87 Classic in style, the “not so small” Petit Chablis reveals hints of grapefruit  and minerals on the nose and palate. It’s fresh, crisp and finishes on a clean, chalky note. La Chablisienne 2013 Dame Nature Chablis 89 This is another wine made from organically farmed vineyards. It shows an effusive, floral nose with notes of ripe citrus. On the palate, it has a stony, steely character with hints of yellow stonefruit and a nice chalky finish.  La Chablisienne 2012 La Pierrelée Chablis ($25) 89 Made from 20 year old vines , La Pierrelée shows a chalky mineral nose with notes of green kiwi. It has a soft attack leading to a pleasantly round and full palate with bright acidity. Very good. La Chablisienne 2012 Les Venerables Vielles Vignes Chablis ($29) 90 Aged in both stainless steel and oak, Les Venerables is made from 50 year old vines.  Lime citrus shows on the nose. It’s nicely structured with firm, bright acidity and a full, round mouthfeel, finishing with lingering wet stone notes.

La Chablisienne 2012 Côte de Léchet Chablis Premier Cru ($35) 90 This is classical Chablis with a precise perfume of citrus and river rocks, a soft attack, and a bright, delicious palate showing good acidity and minerality and a hint of fennel. The focus of this wine is pure, clean fruit married to crisp minerals.  La Chablisienne 2012 Les Vaillons Chablis Premier Cru ($35) 90 Les Vaillons shows a reticent wet stone nose and a firmly structured, stony palate with light orchard fruit notes and a hint of fennel.  The wine was quite closed at the time of tasting, but it shows good balance and a chalky finish. La Chablisienne 2012 Montmains (Butteaux) Chablis Premier Cru ($35) 91 This is a Montmains Premier Cru sourced from the Butteaux sub-climat where the soils are deep clay with limestone and temperatures are a tad cooler, too. Medium dark yellow straw. This is an alluring wine showing a complex bouquet of chamomile flowers, peach skin, and chalky stone. It’s quite lush and round on the palate with good concentration and a delicious, chalky finish. The best of the left bank Premier Crus.

La Chablisienne 2012 Montée de Tonnerre Chablis Premier Cru ($38) 91 This 2012 Premier Cru was a bit dumb at the time of tasting, showing hints of lime citrus scents and flavors with an earthy nuance. However, the palate texture is very fine, dense and evoking slippery river stones, while showing some astringency.  Very good potential.  La Chablisienne 2013 Montée de Tonnerre ($40)  91 In contrast to the 2012, the 2013 Montée de Tonnere is showing beautifully right now, reflecting both its state of development and the ripeness of the vintage. It reveals sweet scents of white flowers and fruit and a perfumed palate of white pear and finishes very long and mineral-like. La Chablisienne 2013 Fourchaume Premier Cru Chablis  ($39) 90+  The Fourchaume reveals emphatic scents of flint and flowers. It’s well-balanced with good structure and firm acidity. La Chablisienne 2013 Fourchaume L’Homme Mort Premier Cru  91 Made from the L’Homme sub-climat of Fourchaume, this 2013 wine reveals the ripeness of the vintage with an expressive, tangy stonefruit nose. It’s densely flavored and shows stony minerals on a focused palate, finishing with good extract. La Chablisienne 2012 Mont de Mlieu Chablis Premier Cru ($40) 92 The 2012 Mont de Milieu reveals fragrant aromas of white peach with mineral and fennel notes and a full, softly textured, lanolin-tinged palate. It’s a wine of excellent harmony and balance. La Chablisienne 2012 Vaulorent Chablis Premier Cru ($39) 91 Growers of La Chablisienne have over 5 ha in this almost-Grand Cru located right next to Les Preuses. It reveals a fine, floral nose with nuances of stonefruit and honeycomb. The palate is open, sensuous, feminine, and full of flavor, finishing very long with good extract. A lovely wine.  La Chablisienne 2010 Vaulorent Chablis Premier Cru  92 This 2010 premier cru shows how even moderate aging deepens and makes for more complex flavors. The nose reveals beeswax, yellow flowers and just a hint of earthiness, while the palate shows deeper notes of stone fruit and lemon cream accompanied by zesty acidity and firm minerality. 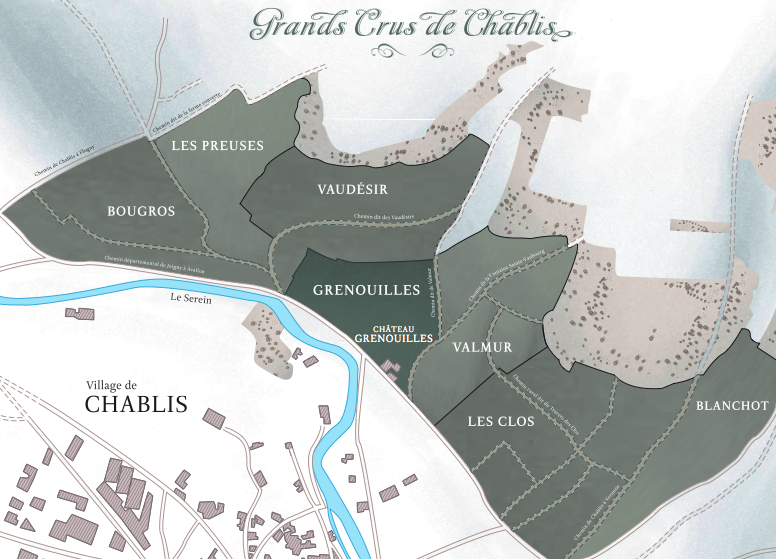 Les Grenouilles  This smallest (9.4 ha) of the Grand Cru vineyards is located just above the D965. Close proximity to the Serein is the plausible explanation for its name—Grenouilles (frogs).  Its location at the bottom of the hill gives Grenouilles deep clay soils? The 7.2 ha La Chablisienne parcel has 50 year old vines farmed organically. Unlike Les Clos or Vaudesir, Les Grenouilles does not have a distinct Grand Cru personality. Rather, it is sometimes described as the wine one would get blending across all the Grand Crus. In addition to La Chablisienne, Daniel Defaix, Benoit Droin, and Louis Michel make wine from Les Grenouilles. However, La Chablisienne is the only producer to make wine from the small, 2 ha plot called Château Grenouilles located at the southern corner of the vineyard. We review these wines in our upcoming report on The Wines of Chablis.

La Chablisienne 2012 Grenouilles Chablis Grand Cru 92+ ($80) Les Grenouilles has fragrant, floral aromas with nuances of spice and lemon butter. The wine is focused and straight, refined and silky in the mouth. The finish is gorgeous, thick and long with a purity of lemon cream. Our favorite wine of the tasting. La Chablisienne 2012 Les Preuses Chablis Grand Cru ($80) 92 Yellow straw. The Les Preuses reveals touches of lemon curd, wet river stones, and oak on the nose, and the palate shows a silky texture and integrated flavors of minerals and lemon, finishing on a light gunflint note.