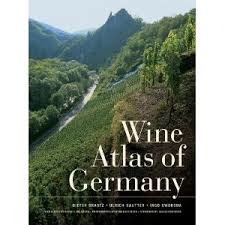 This is the most extensive, comprehensive and up to date book on German wine geography available in the English language.  Authored by three German experts on Riesling and German wine, it was originally published in German in 2007. The English translation is published by the University of California Press with a translation by Kevin Goldberg that also includes revisions resulting from the 2012 reorganization of the Confederation of Predicate Wine Estates (VDP) classification system. It provides detailed information on each of Germany’s sixteen wine regions using a format familiar to readers of our International Wine Review reports. Beautiful, detailed maps (67 of them!) are accompanied by in-depth discussions of the history, climate, soils and vineyards of each region as well as beautiful photographs by Hendrik Holler.

American consumers often find German wine difficult to understand with its complicated classification system and unintelligible labels. This book doesn’t address the latter, but it bravely presents its own, coherent and comprehensive classification systems for Germany’s vineyards, rating them as exceptional, superior, good, and other (i.e., not so good) and then rates hundreds of them. There have, of course, been many criticisms of the 1971 German Wine Law, and the VDP classification was developed in response, But the VDP system rates only the vineyards of Confederation members, while the 1971 classification failed to rate individual vineyard parcels within large vineyard areas.

Some will certainly quibble with some of the specific vineyard rating decisions made by the authors, and it’s difficult to conceive of any classification system that could avoid criticism. However, there is no denying the contribution of this book, not just in evaluating vineyards, but in explaining the terroir of each region and, especially, the soils, microclimate, wine characteristics, and the most important producers of the best (i.e., excellent and superior) vineyards.  This is invaluable to both the consumer of German wines and to the wine tourist wishing to organize a trip through Mosel, Saar, and other wine regions of one of the world’s most important wine-producing countries.

The Wine Atlas of Germany is a prodigious effort and an excellent reference book that every connoisseur of German wine should have at their ready.