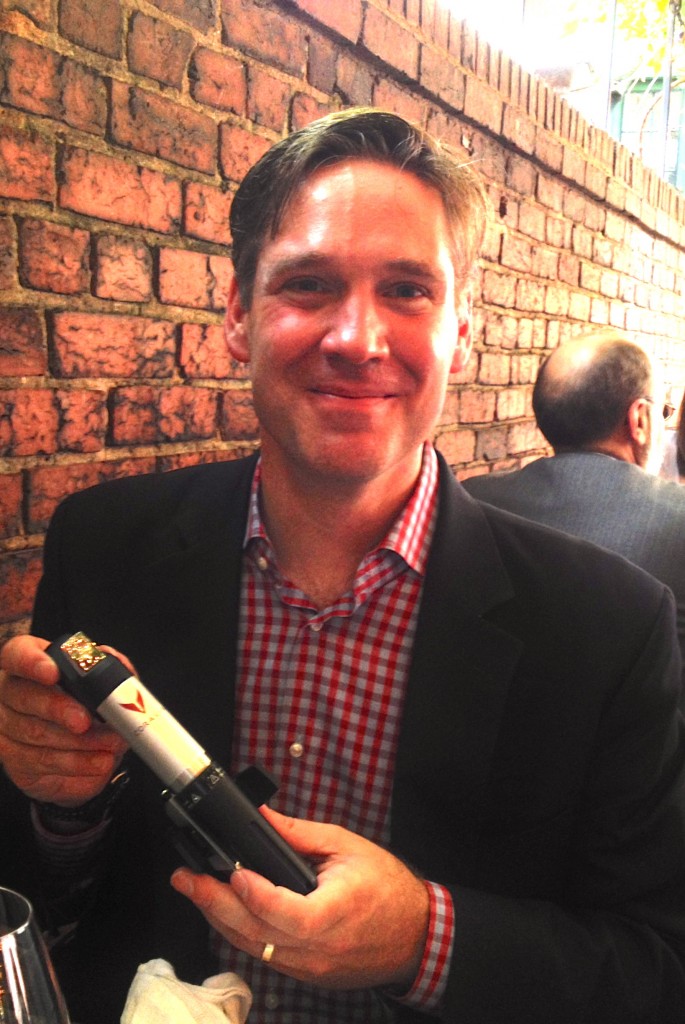 Greg Lambrecht has used his MIT degrees in nuclear and mechanical engineering to invent numerous medical devices, especially orthopedic and spinal implants, and also holds numerous patents in the fields of cardiology and gynecology.  Fortunately for wine drinkers, Greg has also applied his creative skills to a question that has vexed wine consumers since, well, cork was first put in a wine bottle in the 16th century:  how to preserve wine in an already opened bottle?

We met Greg recently to learn the origins and mechanics of his invention that for the most part answers this question.  We also tasted a couple of wines that had first been opened using the Coravin over a year ago.  One, a 2010 Alex Gambal Meursault, was only 1/3 full.  While we weren’t able to compare these already opened, Coravin-preserved wines with freshly opened ones, the Coravin wines were certainly fresh and free of the kinds of defects one might expect to find in wines opened over a year ago.

Greg spent several years perfecting the Coravin, which “opens” the wine using a special, surgical needle that pierces the capsule and cork, extracts wine, and then preserves the remaining wine in the bottle by injecting argon gas, which is both heavier than air and inert.  The small hole the needle makes in the cork quickly reseals once the needle is withdrawn, and the argon prevents oxidation of the wine.

Coravin was introduced to the wine world in 2013 but withdrawn earlier this year after reports of a few wine bottles breaking under the pressured gas introduced to extract wine. Investigation showed that all the broken bottles were defective in one way or another—the bottles had thin spots or had small fractures from being dropped. However, to prevent any possible damage from broken bottles, Coravin developed a protective neoprene bottle sleeve, which is now part of the standard Coravin package.

Coravin promises to radically change wine consumption. The ability to sell rare wines by the glass rather than the bottle means many restaurants will be able to significantly expand their wine by the glass programs. Consumers and collectors with expensive bottles in their cellars will have the flexibility to monitor their evolution over time without breaking open an entire bottle.  And those with non-drinking spouses will be able to enjoy a great glass of wine without waiting for a special occasion to consume an entire bottle.

At $300 for the device and about $10 per argon cartridge (good for about 10 uses), the Coravin is unlikely to be purchased and used by casual drinkers. But for the connoisseur it has no competition. Other preservation devices, like the ubiquitous vacuum pump, simply don’t preserve as well or as long. Thanks, Greg, for your invention, and good luck with your efforts to create one for Champagne.

We’ll be doing our own experimentation with the Coravin to verify for ourselves how well it preserves different types and vintages of wines.  Look for our articles in the future.

This entry was posted in Markets, Uncategorized and tagged Coravin. Bookmark the permalink.