The Historic Monte Rosso Vineyard and its Wines 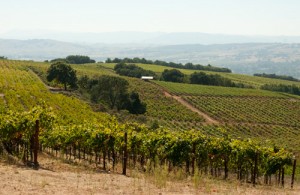 The Monte Rosso Vineyard in the eastern Sonoma Valley hills is considered one of the finest vineyards in Sonoma County. An historic vineyard situated at altitudes ranging from 700 to 1,240 feet, it was purchased by partners Benjamin Dreyfus and Emmanuel Goldstein in 1880. Early plantings succumbed to Phylloxera and the vineyard was replanted in 1890 with Zinfandel, the oldest vines on the property today.  In 1886, after the death of Benjamin Dreyfus, Emmanuel Goldstein renamed the property Goldstein Ranch and built a stone gravity flow winery which operated until prohibition.   During prohibition Goldstein maintained production in the vineyard shipping grapes to San Francisco for home winemakers. When Goldstein died in 1938 his heirs sold the property to Louis Martini, a close friend, who promptly changed the name of the vineyard back to Monte Rosso for its mountaintop location and rich red soil. When Louis Martini acquired the property he also planted Cabernet Sauvignon which is now the dominant variety with roughly 115 acres planted.  Zinfandel is planted on 75 acres followed by small amounts of Merlot, Syrah, and other varieties.

In 2002 E & J Gallo purchased the Louis Martini Winery in Napa Valley together with the Monte Rosso Vineyard in Sonoma.  Today Louis Martini and other fine wineries are crafting stellar old vine Zinfandel and Cabernet Sauvignon from this property.  These mountain vines exhibit great concentration and flavor with elegance and mineral notes different from valley floor wines.   In preparing our upcoming Report # 44 Wines of Sonoma County, we tasted some excellent wines from the Monte Rosso Vineyard produced by Arrowood, Louis Martini and other producers. . Look for our reviews of these wines in Report #44 which will be published in October 2014.