All the world loves rosé Champagne, today more than ever. While the French consume the most, the British and Americans aren’t far behind.  Rosé Champagne sales have continued to increase over the past few years despite the severe recession and despite rising prices for rosé.  Given this consumer interest in rosé, we will soon be publishing Report # 40 A Consumer’s Guide to Rosé Champagne and Sparkling Wine where we review more than 150 sparklers and provide a purchasing guide to consumers.

French exports of rosé Champagne continue to rise. In 2012 they increased by 2.4% over 2011, reaching 13 million bottles[1]. Rosé now represents 9.4% of total Champagne exports by volume (138 million bottles) and 11.2% by value, reflecting the higher price it commands over other Champagnes. 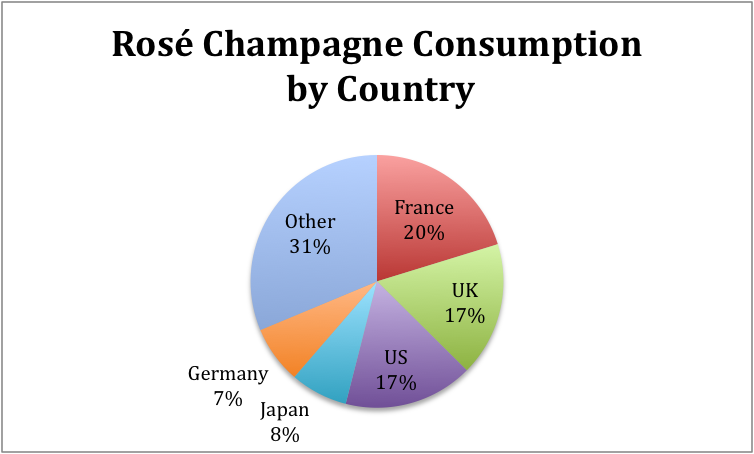 As shown in the graph, in 2012, France consumed the most rosé Champagne, 3.3 million bottles, but the UK and the US were not far behind.  Demand for rosé has been increasing everywhere. In the US rosé increased to 15.3% of total Champagne sales in 2012 despite an increase in average rosé price of 9.1%.  In the UK and France, rosé is a smaller percentage of total Champagne sales [8.7% in the UK, 4.8% in France], but rosé’s market share is increasing in both countries. The most dramatic growth has occurred in France where sales have increased a phenomenal 61.6% between 2008 and 2013.  In every country sales have increased despite rising average prices for rosé.

All this points to changing consumer tastes and growing demand for rosé Champagne.  This parallels to some extent the growth in sales of still rosé wines that we documented in our earlier 2013 Annual Rosé Report.