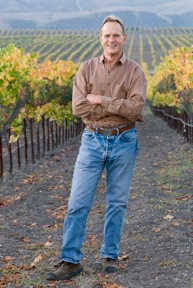 A graduate in geography from the University of California, Berkeley, in 1965, and a Navy veteran, Richard Sanford was the first to plant Pinot Noir in the Santa Ynez Valley of Santa Barbara.  His Sanford & Benedict Vineyard was established in 1970 with his biologist partner, Michael Benedict at a time when growing  grapes such as Pinot Noir in this  region was unheard of.  However, Richard believed correctly that the area’s cool growing season offered ideal conditions for producing both Pinot Noir and Chardonnay.  In 1980 Sanford and Benedict parted ways, and Richard and his wife Thekla established Sanford Winery in the Santa Rita Hills. The Sanford Winery became one Santa Barbara’s best Pinot Noir producers at the time.  In 1983 the Sanfords planted the first of three organic vineyards at Rancho El Jabail.  The La Rinconda and La Encantada vineyards followed, and in 2000 all the Sanford estate vineyards were certified organic by the California Certified Organic Farmers (CCOF).

Today Richard and wife Thekla are engaged in a new winemaking venture, which they launched in 2005 called Alma Rosa.   A champion of organic viticultural practices, Richard has over 100 acres of organic certified vineyards in the Sta. Rita Hills AVA, and his Alma Rosa winery produces good quality Pinot Noir and Chardonnay as well as small amounts of Pinot Gris and Pinot Blanc which we tasted for our upcoming report #36 The Wines of Santa Barbara County.   The  Alma Rosa 2010 Pinot Noir La Encatada was a standout.