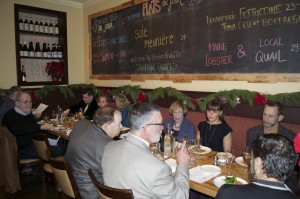 The five-course dinner and the Champagnes served with each course are summarized below: 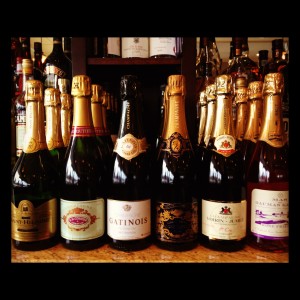 a sauterne couli, fois gras, and brandade tartlets served with a crisp and fresh tasting non-Champagne sparkler, Saint Hilaire Blanquette de Limoux Gold Label ($18).  The Saint Hilaire is made of Chardonnay, Chenin Blanc and Mauzac grown in the hills of Limoux in the south of France.  It is a highly  versatile wine and paired well with  the canapes.

The first course consisted of plump blue point oysters from Maine served with a green apple mignonette.  The oysters were paired with an elegant Voirin-Jumel NV Brut Blanc de Blancs Premier Cru ($39)  made of 100% Chardonnay.  Voirin-Jumel is a tiny producer located in Cramant, one of Champagne’s finest areas for growing Chardonnay.  This bright, lemon-infused,  elegant blanc de blancs paired beautifully with the oysters.

The next dish–House-Cured Salmon with Dill—was among my favorites.  Served with field greens and a dill sauce, this simple but elegant dish showed the restaurant’s skills at curing salmon so it’s rich in texture and filled with flavor.  The salmon was served with Rene-Henri Coutier  NV Brut Tradition Grand Cru  ($45).  A blend of 60% Chardonnay and 40% Pinot Noir, the Brut Tradition showed rich bold flavors that were a perfect accompaniment to the cured salmon and dill sauce

Opened in May, Bistro Vivant is owned by  Domencio Cornacchia and Aykan Demiroglu, two experienced restaurateurs from the DC area.   Their goal was to create an authentic French bistro offering an eclectic menu based on local ingredients from farmers’ markets. They also offer their customers a unique wine list consisting of small wineries, many organic, from all regions of France.   While Bistro Vivant is still a work in progress,  there is already much to admire about this new restaurant inMcLean,VA

House Made Fetuccine with Tuna “Cru” & Bottarga was our next course.  More Italian than French, this magnificent creation was built around a sauce of olive oil and garlic and marinated roes of tuna, rockfish, salmon and trout topped with sea urchin.   The dish was paired with Andres Cluet NV Brut Grand Reserve ($50).   The dish’s bold flavors required a bigChampagne,  and Cluet’s NV brut was a perfect pairing.  Made of 100% Pinot Noir, with 6 years of aging it reveals  complexity and elegance.  Cluet is one of the finest grower producers in Champagne today, and this bottle was a knock out with this strongly flavored dish. 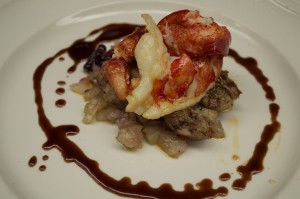 Maine Lobster & Local Quail was our final dish and it was magnificent!  Served with sunchokes, parsnips and huckleberry it was paired with a Gatinois NV Grand Cru, Brut Tradition. A blend of 90% Pinot Noir and 10% Chardonnay, the Champagne was a perfect match for the succulent lobster and savory quail. Gatinois fruit is of such a high quality that when owner, Pierre-Cheval Gatinois has extra fruit to sell, he sells it to his next door neighbors Bollinger, exclusively for their Grande Annee.

For dessert we were treated to Goat Cheesecake served with a persimmon coulis and pistacchio powder. The cheese cake was paired with Mas de Daumas Gassac 2011 Rosé Frizant ($25) a delightful sparkling rosé from the Languedoc. Mas de Daumas Gassac is best known for its big earthy reds and whites so it was a pleasant surprise to learn that they also make a charming sparkling rosé. The rosé is dark ruby in color and is fruit forward with a lively palate of dried cherry flavors. A decadent pairing.

We thoroughly enjoyed our evening and judging from the comments of other guests Bistro Vivant’s Champagne dinner was a great success.

All participants will receive with compliments of Bistro Vivant the newly released Report #34 ” Champagne” published by the International Wine Review.