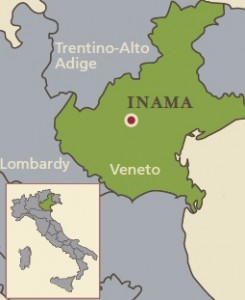 Inama is revered as one of the top producers of high quality Soave. Our reviews at the bottom of this article show why. We recently visited Stefano Inama at his winery to find out how he makes such superb wines. The story begins with his father Giuseppe who started purchasing small vineyard plots in the Monte Foscarino area of Soave in the late 1950s but didn’t start producing wine under his own label until 1991. Giuseppe sought to use the old vineyards and traditional methods of winemaking to rediscover the wine that Soave was before it was emasculated by mass production from high yielding vineyards. Sixty years later, Inama has achieved its goal, and today a number of independent producers are making high quality, traditional Soave. Our reviews of all the top Soaves will be published in our Report # 35 The Wines of Soave, forthcoming early next year. 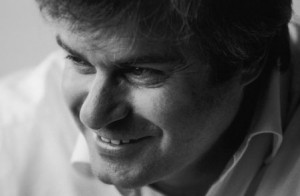 Today, Inama has over thirty hectares in Soave planted mostly to Sauvignon Blanc and Garganega, the grape used to make classic Soave.  [Giuseppe first gained fame for his Sauvignon Blanc wines, and they are still an important part of the Inama portfolio.] I sat down with Stefano Inama at his winery this summer to talk about what makes Inama’s Soave wines so special. He explained that Inama’s vineyards have a special terroir—they are old vines sited on steep hills with volcanic soils in the Classico area of Soave.

Inama uses organic practices in the vineyard, makes his own, natural fertilizers, and employs the traditional pergola training system. Yields are kept low—no more than 50 quintal per hectare—and grapes are harvested by hand and placed in small casone (buckets) to prevent broken skins.

Stefano produces three different Soaves:  Vin Soave Classico, Soave Vigneti di Foscarino, and Vigneto du Lot.  The Soave Classico is a blend of pergola-trained Garganega grown throughout the property. After a cold soak, alcoholic and malolactic fermentation take place in steel vats where the wine rests for eight months prior to bottling. The resulting wine is light, fresh, and easy to drink. It’s best paired with salads and light fish dishes. 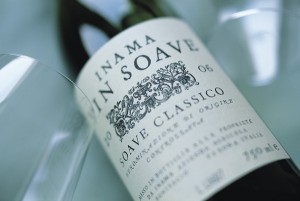 The Soave Vigneto di Foscarino is made from a vineyard selection of 40 year old vines located just southeast of the top of Monte Foscarino. The northeastern exposure and morning light contribute to the wine’s high acidity and freshness  The Soave Vigneto di Foscarino is fermented in oak barrels and sees  malolactic fermentation.  It is left on the lees with battonage for about 7 months, after which it is filtered and racked to steel vats.  Once bottled, the wine rests until December when it is released for sale. The taste is what you should expect of a great Soave–round, full bodied and representative of its terror.  The wine pairs best with assertive fish dishes or white meats.

According to Stefano, the Vigneto du Lot is the modern brother to the Vigneto di Foscarino. It comes from a single two hectare lot of trellised vines to maximize their exposure to the sun. Because of this, it has a higher concentration of sugar and is more fruit forward in character.  The fermentation is done in 70% old and 30% new barriques where the wine lies on the lees with battonage for about 8 months before a coarse filtering and bottling.  Aromatic, creamy and intense, it pairs beautifully with fish, chicken and veal dishes.

Stefano says, “It is easy to create something drinkable when using modern technology, but how many people can grow a healthy vine that makes a drinkable wine without adding anything to it?”  He realizes that in times of crisis, consumers will choose the ‘cheaper’ wine, but he hopes these same people understand that these wines, often from co-ops, are not traditional either in how they’re made or in their taste. He hopes that people drink his wine for its quality and for what Soave represents.  That Inama has been successful in producing Soave goes without saying. Over half its production is exported, with over one-third going to the North American market. Inama is imported to the US by Dalla Terra Winery Direct of Napa, CA. Our reviews of the Inama Soave wines follow.

Inama 2011 Vin Soave Classico ($15)  89  The entry level Inama Soave Classico has a clean citrus and herbal tea aromas that are picked up on a bright palate with the addition of notes of wet stones, finishing with good length.

Inama 2010 Vigneto Di Foscarino Soave Classico ($24)  91  The Di Foscarino Soave is rich and fresh. It has a complex nose of ripe yellow melon with a hint of apricot. Superbly balanced, the palate offers ripe stonefruit, honeycomb and minerals with a very long, bright finish.

Inama 2010 Vigneto Du Lot Soave Classico ($30) 93 As good as the Di Foscarino Soave is, the Du Lot is even better with impeccable balance and a creamy, very densely flavored palate. The nose evokes peach liqueur and wet river stones.   The palate is full and softly expressed, offering layers of rich, ripe yellow melon and peach. Superb.