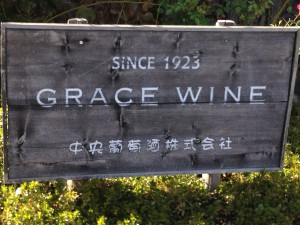 The Grace Winery in Katsunuma

One of the greatest pleasures of traveling the world of wine is meeting young winemakers of great promise.  On last month’s trip (which we recently wrote about) to Japan’s Yamanashi Prefecture where its vitis vinifera Koshu grape grows best we met another.  Ayana Misawa is the daughter of Shigekazu Misawa, Japan’s Koshu pioneer. In this respect, she reminds very much of Laura Catena, daughter of Mendoza’s Nicolas Catena, Argentina’s pioneer of modern Malbec.

In a country where young, educated women often find their career prospects constrained by gender, it’s especially amazing to find a young woman, 31 years of age, making wine in one of Japan’s most prestigious wineries. Ayana has studied winemaking on at least three continents—first at the Institute of Enology and Viticulture in Yamanishi, next at the Faculty of Enology of the University of Bordeaux, and finally doing post-graduate work in vine physiology at South Africa’s Stellenbosch University.  Following her training, she has spent time making wine at some of the world’s best-known wineries—Cape Point Vineyards in South Africa, Catena Zapata in Mendoza, Errazuriz in Chile, Mountford in New Zealand, in addition to spending time in Margaret River in Australia and Burgundy in France. 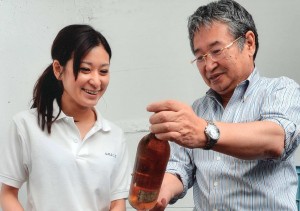 Much as Nicolas Catena did with Malbec, Shigekazu Misawa has been doing clonal research on Koshu, selecting the best plants for Grace’s new vineyards. He has also experimented with VSP, as opposed to pergola, trellising, reducing yields, and identifying new, high altitude (700 meters above sea level) vineyard locations in the Akena area.  This experimentation is leading to better quality fruit.

The Grace Koshu wines reveal Ayana’s winemaking skills. At the winery in Akena, we tasted Koshu wines coming from different vineyards of distinct terroir. We later paired them with sushi in Kofu.  In addition to the Grace Koshu wines, we also tasted a very respectable rosé and rich and elegant Bordeaux blend.

It has been said that no man is a prophet in his own land, and that expression applies to Japanese wine.  While expensive French and Australian wines can be found easily in Tokyo, Japanese wines are difficult to find. The only store I found with a good selection was at the train station in Kofu.

The Misawa Vineyard at Akeno-cho

Grace’s wines are slowly winning the respect of Japanese wine drinkers.  Chef Toru Okuda of the three star Japanese restaurant Ginza Koiyu in Tokyo has sponsor several dinners pairing Grace wines with his cuisine.  And this week, on December 5, Tokyo’s two star French restaurant Cuisine Michel Troisgrois is holding a winemaker’s dinner starring Grace wines. If you’re in Tokyo, I suggest you try to get a reservation to it.

Grace 2011 Rosé 89 Pure medium pink color, this is a very good rosé, made of estate grown Cabernet Franc and Cabernet Sauvignon fermented in oak. The wine is refined and delicate, showing a light red berry and minerals bouquet and good density of red berry and cherry on a dry palate.

Grace 2009 Cuvée Misawa Rouge 91  Who would expect a Bordeaux blend of this quality in the marginal growing conditions of Yamanashi? Dark ruby red in color, this 65/35 blend of Cabernet Sauvignon and Merlot reveals an explosive nose of toasted oak, dark red plum, and a hint of chocolate. It’s elegant and very flavorful with rich, ripe persistence and quite high acidity. It will benefit from additional time in bottle. Aged 18 months  in 100 percent new French oak.