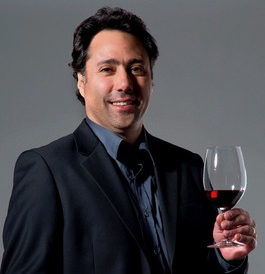 Concha y Toro winemaker Marcelo Papa was in town this week, and we met up with him to taste new releases and catch up on the news from Chile.  We last tasted with Marcelo in Santiago while preparing our report on The Wines of Chile.  At that time we talked about the new cool climate vineyard plantings of Concha y Toro in Elquí, Limarí, and coastal Colchagua and tasted some early releases. This week we had the opportunity to see how these areas and their wines are developing. We give our reviews of the wines below. As is usual for Concha y Toro, all the wines we tasted offer very good quality for the price.

We tasted wines from both the Serie Riberas and Marques de Casa Concha lines of Concha y Toro. The Serie Riberas wines are from vineyards located in important river basins in Chile.  These basins are often characterized by cooler temperatures and well-drained, alluvial soils. Marcio Ramirez is winemaker in charge of the Serie Riberas line. The Marques de Casa Concha line puts the focus on finding the best terroir for each variety. The detail-oriented consumer will notice that Concha y Toro has been changing the source of Marques de Casa Concha fruit as it has developed its cool climate vineyards in Limarí, Leyda and elsewhere.  Thanks to Lars Leicht of Banfi Vintners, which imports Concha y Toro to the US, for organizing the tasting at Ceiba, located on 14th St, NW, in Washington, DC.

Concha y Toro 2012 Gran Reserva Serie Riberas Sauvignon Blanc Rapel  Colchagua ($17) 90  This is a delicious, pure Sauvignon Blanc showing lime citrus, minerals and very little of the green herbs one often associates with this variety.  It’s crisp, clean and full of flavor.  This wine comes from the fruit of the Ucúquer vineyard on the south bank of the Rapel River, located about 20 km south of Leyda and 15 km from the sea; its soils are sandy loam.

Concha y Toro 2012 Marques de Casa Concha Sauvignon Blanc Leyda ($18) 91+  This Sauvignon Blanc could pass for one from the Loire with chalky minerals on both the nose and in the mouth and an additional touch of grapefruit flavor. It shows a refined and focused palate with bright natural acidity. The fruit for this wine comes from the Leyda Valley, located 14 km from the coast in the San Antonio Valley where the temperatures are low and there’s frequent fog; its soils are red clay over granite.

Concha y Toro 2010 Chardonnay Gran Reserva Serie Riberas Rapel Colchagua ($17) 89   Barrel fermented but with no malo, this is a light to medium weight Chardonnay showing lemon citrus aromas and flavors and a long finish with a light, leesy note.  The oak is perfectly integrated. Like the Riberas Sauvignon Blanc, this wine comes from the Ucúquer vineyard on the south bank of the Rapel River.

Concha y Toro 2011 Marques de Casa Concha Chardonnay Limarí ($18) 90+ This has always been one of our favorite Chilean Chardonnays. Fortunately, while the fruit is now sourced from Limarí, the style of the wine is unchanged. Very aromatic and flavorful, there’s lees, a hint of vanilla, and a touch of honeycomb on the nose, followed by a rich, full palate of toasted oak and dense tropical fruit but without any sense of sweetness.  Barrel aged 12 months with 25% new French oak, about 25% malo, and frequent lees stirring. Fruit comes from the south side of the Limarí River where the soils are alluvial and clay with calcareous sub-soils. Limarí is known for its sunlight, morning  mists, and cool temperatures due to the Pacific Ocean, which lies 25 km away.  Aged 12 months in French barrels.

Concha y Toro 2011 Marques de Casa Concha Pinot Noir Limarí ($22) 89  Chile is getting serious about Pinot Noir, and this wine shows the progress. It shows dark cherry with a savory note on the nose and a fresh, lively palate. Made of clones 777 and 113 fermented 60% in open top stainless steel and 40% in open 400 liter oak casks.  Made from the fruit of young vines on the Quebrada Seca located on the south side of the Limarí River where the soils are alluvial and clay with calcareous sub-soils. Limarí is known for its sunlight, morning  mists, and cool temperatures due to the Pacific Ocean, which lies 25 km away.  Matured 14 months in French oak.

Concha y Toro 2011 Gran Reserva Serie Riberas Carmenere Peumo Cachapoal ($17) 90  A rich, ripe, dark Carmenere, this wine shows dark plum with chocolate notes on the nose, which are mirrored on the palate along with some savory notes and gritty tannins. The fruit for this wine comes from 900 meter high Peumo vineyard, which lies above the Rio Cachapoal; the soils are alluvial clay loam.   A blend of 90% Carmenere and 10% Cabernet Sauvignon.

Concha y Toro 2011 Gran Reserva Riberas Cabernet Sauvignon Marchigüe Colchagua ($17) 89 Meaty dark fruit shows on the nose of this fruit forward Cabernet, followed by sweet, dense fruit on the front of the palate, a modestly weighted mid-palate, and ripe but gritty tannins.  The fruit for this wine comes from the Palo Santo vineyard on the south bank of the Tinguiririca River.

Concha y Toro 2010 Marques de Casa Concha Cabernet Sauvignon Maipo ($22) 91  Big sweet dark fruit shows on the nose and in the mouth of this delicious Chilean Cabernet.  A softly textured, pepper and black fruit palate makes this wine a perfect partner for grilled steak. The fruit for this wine comes from the Puente Alto Vineyard in Maipo; its soils are alluvial and stony. The wine spends 18 months in French oak.