Book Review: A Vineyard in Napa — The Story of Shafer Vineyards 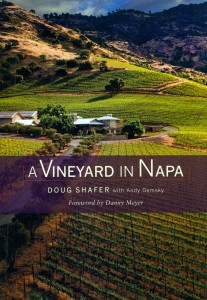 In the early 1970s, John Shafer, a Midwest businessman with no experience growing grapes or making wine purchased a 209 acre, steeply terrained farm in a part of the Napa Valley known as Stags Leap.  Fast forward forty years, and this simple farm ranks among Napa Valley’s first growth wineries and vineyards making some of Napa’s most sought after wines, including the iconic Hillside Select Cabernet Sauvignon.  This book, written by Doug Shafer with Andy Demsky, tells the story of this transformation, initiated by John Shafer and continued by his son, Doug.

The initiation of John Shafer’s venture came on the cusp of an awakening for California wine. Those of us living in the Bay Area at the time remember the explosive growth in new vineyards and wineries.  And in 1976, shortly after Shafer’s purchase, the Judgment of Paris gave notice to the world that California could make world quality wine.  John Shafer also had the good fortune to have purchased an extremely promising vineyard site, located just a stone’s throw from Warren Winiarski’s Stag’s Leap Wine Cellars, one of the winning Cabernet Sauvignons in the Paris competition. 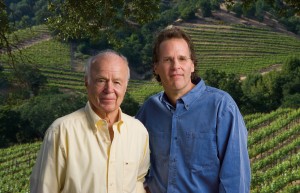 While Shafer Vineyards has great terroir, its development encountered numerous challenges in the vineyard, the winery, and the marketplace.  A Vineyard in Napa relates how one winery and one family confronted those challenges.   But it does much more than just that. The book also tells the story of wine development in the Napa Valley and the impact of environmental and economic changes on the wine industry from the perspective of a family winery.  It also tells of the camaraderie among Napa vintners in those early days and the important role of the Napa Valley Wine Technical Group, a venue for sharing experiences originally initiated by Andre Tchelistcheff.

John Shafer had to learn a lot about how to plant a hillside vineyard, what to plant—a no brainer given Winiarski’s success with Cabernet Sauvignon, how to manage the vineyard, and when to pick the fruit.  They started out using chemical sprays and ended up using sustainable, organic practices, including growing cover crops between the rows. They began planting with overhead sprinklers, which were later replaced with more efficient, drip irrigation. They started out picking by the numbers [i.e., brix] and learned to pick based on phenolic ripeness. They also had to learn how to make wine, experimenting with different oak regimes.

Over four decades, John and Doug Shafer experienced their share of difficulties—too much heat or too little, too little rain or too much at the wrong time, wildfires, hydrogen-sulfide in the wine, Brettanomyces in the winery and the vagaries of the wine market.  The book tells how the Shafers invented solutions to these problems, learned from the challenges, and ended up making still better wine.

One of the more interesting challenges facing Shafer was how large to become.  As a successful Napa winery with a highly marketable brand, Shafer could have gone the way of others and expanded with a line of more popularly priced wines. Fortunately, for both Shafer and the wine consumer, they stuck to their original vision of making the best possible wine from their vineyards. Today they’ve arrived at a sweet spot—a medium sized (30 thousand cases) family winery producing wines the quality of the smallest boutique wineries but at a volume (and price) accessible to more than just the few hundred lucky names on a boutique’s exclusive mailing list.

The book also reveals the dramatic changes that occurred in the Napa wine industry over a short period of time—the influx of corporate investors, the tremendous growth in wine tourism, the increasing number of appellations [including that of 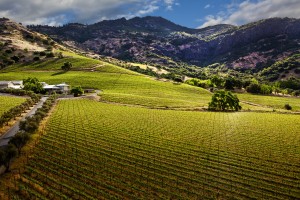 the Stag’s Leap AVA]. It also discusses the challenge of the market place—from finding consumers early on to rationing wine in later years; the inevitable cycle of boom and bust familiar to many agricultural products; and changing consumer tastes that cause the Shafers to plant vineyard blocks to Chenin Blanc and Sangiovese, only to bud over to more marketable varieties years later.

A Vineyard in Napa is a delightful, easy read that successfully relates the trials and ribulations of a family winery in the Napa Valley while at the same time documenting the many changes—commercial, environmental, technical and legal—affecting California vineyards and wineries over a 40 year period.  The evolution and unqualified success of Shafer Vineyards over these four decades parallels the growth and transformation of the Napa Valley into one of the world’s most highly respected wine growing areas. While the book does not portend to be explain the technical details of this transformation, its easy going prose deceptively does just that. A Vineyard in Napa is the best told story of a California family winery I’ve yet read. A video preview of this book is also available on the Shafer web site.