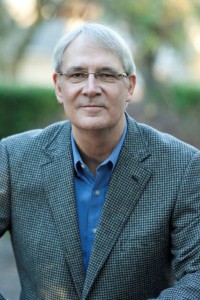 David Ramey has one of California’s most impressive winemaker resumés and is a member of the small tribe of scholar-winemakers who systematically research and experiment how to make better wine.  Of course, impressive resumés don’t guarantee impressive wines, but as our tastings over the years show, in David’s case the wines reflect the results of his careful, systematic research and experimentation carried out over the past three decades.  We recently published an article on the Ramey Wine Cellars current releases.

Fresh out of UC, Davis, and with an internship at Jean-Pierre Moueix’s  Château Pétrus under his belt, David started his winemaking career in 1980 as assistant to Zelma Long at Simi Winery.  He subsequently became chief winemaker at Matanzas Creek and then Chalk Hill before taking on the task of winemaking and building the new winery at Dominus in 1996. He later helped rebuild and replant what had been the Girard Winery into Rudd Estate.  In 1996 he and his wife Carla started Ramey Wine Cellars, which is located in Healdsburg.  He also continues to consult, for Lancaster Estate, Laurel Glen Vineyard, Buena Vista, Rodney Strong, and Brassfield Estate in Lake County.

expressive of their terroir. His Chardonnays reflect the clay soil and warm temperatures of vineyards in Carneros; the cooler, gravel, loam and clays soils of Russian River Valley vineyards; and the foggy, cool climate of the Sonoma Coast.  His Cabernet Sauvignons are all sourced from the Napa Valley.

David’s research-based, scholarly approach to winemaking began with his 1979 UC Davis master’s thesis, ”Volatile Ester Hydrolysis or Formation during Storage of Model Solutions and Wines” published in the Journal of Agriculture Food Chemistry.  He has continued to research and experiment and disseminate his results ever since.  His viticulturist is Daniel Roberts, a PhD soil scientist with the same research inclinations as David. The results can be found in the wines.

This article is one in a continuing series on great winemakers and their wines from around the world. Readers are encouraged to recommend winemakers to be included in the series.

This entry was posted in California, Great Winemakers. Bookmark the permalink.