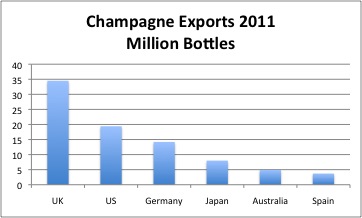 According to the CIVC (Comité Interprofessionel du Vin de Champagne), the world purchased 323 million bottles of Champagne in 2011, of which 44% were exported. The single largest export market is the UK (35 million bottles), and the second largest is the US (19 milllion). Despite, or perhaps because of, economic difficulties, sales in the US increased 14% over 2010. But it has a long way to go to catch up to the UK. While UK consumes 1.6 liters of sparkling wine per adult annually, the corresponding number for the US is just 0.6.   France puts them both to shame with 5.7 liters.  The longer run picture shows the UK pulling still further ahead of the US.  According to the CIVC publication Les Expéditions de Vins de Champagne 2010, exports of Champagne to the UK increased a remarkable 40% between 2000 and 2010, while exports to the US increased just 23%. But while the Brits drink more, the Yanks drink better. The average price of a bottle of Champagne exported to the UK was €12.8 versus €19.1 for the US.  Interestingly, South Africans drink even better, an average €20.3 per bottle of Champagne. However you look at it, the future looks sparkling bright for Champagne.

This entry was posted in Markets and tagged Champagne. Bookmark the permalink.