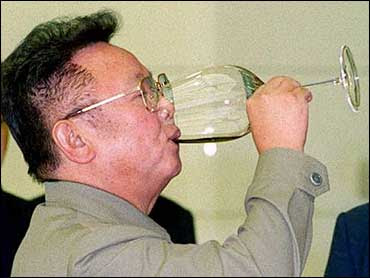 The following report comes direct from Emile Joubert, correspondent for the incredibly veracious Wine Goggle, so we are 100% certain it’s true.

“Four cases of South African wine have been found in the cellar belonging to recently deceased North Korean despot Kim Jong-Il, a well-known lover of wine. According to family spokesman Long Dik-Tril the cellar of over 10 000 bottles is a living memory to a man whose love of wine and the wine culture were surpassed only by Kim Jong-Ils love of his people, especially those who survived the famine of recent years. The collection included cases of Mullineux Syrah 2008, Columnella 2007, Secateurs SMV 2009 and Allersverloren Port.

“The Leader made a love of collecting and enjoying wine from all over the world, including France, Spain, Australia and especially of South Africa,” Long Dik-Tril said via Skype. Dik-Tril said that Jong-Il’s skill as a wine-taster matched his prowess on the golf course where the Leader once hit 11 holes-in-one during his first ever round of golf.

“He was amazing – our beloved Leader could detect cork taint in a wine bottle before the bottle was opened,” Dik-Tril said. “On tasting a wine he could tell how many grapes each bunch had that was used to make that specific bottle and it took sniff from the glass to determine what the maiden name of the winemaker’s mother was. He also made a loving habit of translating each year’s Platter Wine Guide into Korean, Mandarin and Urdu.”

Among the Kim Jong-Il cellar collection are wines from Romanée-Conti, Margeaux, Petrus, Vega Sicilia and Calon-Ségur, as well as the aforementioned Swartland wines. “The Leader sent a small contingent of Koreans disguised as hairy gay surfers to the revolution in South Africa’s Swartland this year hoping to find some southern revolution brothers to bond with and to possibly kick some imperialist capitalist butt,” says Dik-Tril.

“There was a little bit of revolution in the Swartland – some goose-stepping, a few shouts of ‘comrades’ and much brotherly hugs coupled with Stalinesque projective vomiting. But when we saw it was not the real thing but a wine party where no-one was going to die, our Korean brothers partied along and bought some wine back for Leader Jong-Il. He loved it, and ordered more. Actually, before his death the Leader ordered a thousand workers to build a replica of a place called Porseleinberg outside the coastal Korean city of Wonson. The night before our Leader died he sipped low-yield bushvine Chenin Blanc and had his sommelier executed because he’d missed the latest order for Eben Sadie’s Ou Wingerdreeks.”

According to Dik-Tril the deceased Leader’s cellar will be kept intact as an honour to North Korea’s greatest wine expert.”

This entry was posted in South Africa. Bookmark the permalink.