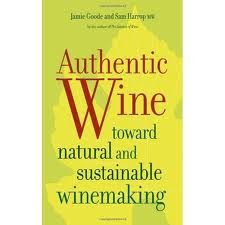 Given the title, it’s not surprising that Authentic Wine (University of California Press) starts off by explaining the concept of terroir and arguing for winemaking that reveals a sense of place. However, this is much more than just a book about natural wine and the natural wine movement. It is a veritable encyclopedia on modern winemaking and viticulture that addresses a number of technical issues in considerable depth. This definitely is not one of those pretty picture wine books full of flowery language and little content. Authentic Wine is a serious book that explains the tricks of the winemaking trade. As such it will appeal to the pensive reader who seeks to understand what lies behind the kinds of wine she likes.

While the book advocates what it calls authentic winemaking, it is not an Alice Feiring type diatribe [see her Battle for Wine and Love] against modern winemaking and Robert Parker. Rather, it is a thoughtful discussion of why and how winemakers intervene in the wine making process.

The authors obviously have their views. They think wine should have a sense of place, and they believe that “wines made as naturally as possible are more expressive of their origins.” It is no surprise that they are not fans of highly extracted, heavily oaked wines, stating “the recipe for making an international style blockbuster red wine is the antithesis of natural winemaking.”

Given that the authors argue for natural winemaking that expresses terroir, they have surprisingly nuanced views on many techniques in the winemaker’s toolbox. The tools or interventions they discuss include acidification, chaptalization, commercial yeasts, use of enzymes, filtration, adding sulphur dioxide, the use of oak, and techniques for reducing alcohol, ranging from adding water to use of spinning cones. They take no moral position on these interventions but instead marshal the available scientific evidence (which in general is sorely lacking) to argue that it’s how these techniques are used that is the important issue.

The authors also recognize that many of the winemaker’s interventions are done in response to the marketplace. Not all customers appreciate authentic wine, and only some are willing to pay extra for that sense of place. Commercial wineries may use enzymes to extract flavor, wood chips to impart a toasted oak flavor, add grape concentrate to add a note of sweetness, and a number of other interventions to produce large volumes of homogeneous wine that can be sold at low prices. But this book isn’t really addressed to the consumers of these wines.

This book is for the cognoscenti—those who already know and appreciate good wine and want to know more about it. Having read the book, they’ll be even better informed, whether it be about spinning cones, genetically modified yeast, or the oddities of biodynamics.

On Parker’s 100 point scale, this book deserves an outstanding 95 plus.

This entry was posted in Book Reviews and tagged Jamie Goode, Sam Harrop. Bookmark the permalink.