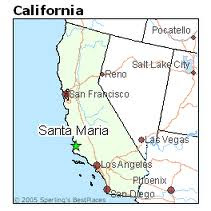 The Santa Maria Valley AVA is unique in its orientation to the Pacific. The Santa Maria River runs east to west emptying into the ocean at the city of Santa Maria, just north of the Vandenberg Air Force Base. The east-west orientation of the river gives the valley unobstructed access to the cool winds and sea fog of the Pacific, making the AVA one of California’s coolest regions for growing wine grapes—Region 1 on the Winkler Scale. It’s the perfect place for growing cool climate Chardonnay, Pinot Noir and Syrah.

The Sierra Madre Vineyard lies at the far western end of the valley, just 15 miles from the sea. It has traditionally sold its grapes to some of Santa Barbara’s best known wineries, but beginning in 2006 owners Doug and Jan Circle decided to produce wines under their own label. We recently had the opportunity to taste their 2008 Chardonnays and gave them superb ratings. Our evaluations of the wines are available in a wine review article we recently wrote. The ratings of the wines can also be found using the “search” function on our home page.

This entry was posted in California, White Wine and tagged Chardonnay, Santa Maria. Bookmark the permalink.