Vineyards, Frogs, and Fences in California

While touring the vineyards of Monterey County recently, we came across a sturdy fence running along the perimeter of a vineyard bordering the Salinas River. We immediately speculated that Mark Twain’s celebrated jumping frog of Calaveras County had developed a voracious appetite for grapes and had made its way to the Salinas to attack the fabled vineyards there. Alas, truth is often stranger than fiction, and the fence was indeed constructed to prevent wildlife, like the native California red-legged frog pictured, here from invading cropland near the river.

In 2006 a dangerous E. coli outbreak was traced to tainted spinach grown in California, and the suspected culprit was wildlife, probably wild pigs. [The source of contamination was eventually located in San Benito County.] The result was that the large buyers and distributors of Salinas Valley leafy greens required producers to take actions to limit such intrusion, resulting in the construction of fences along rivers and removal of vegetation along waterways and hedgerows. 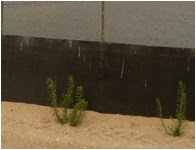 Research undertaken since the 2006 incident shows that wildlife are a less likely cause of the E. coli outbreak than commercial cattle or vegetable processing plants. But fear of another possible outbreak and its associated human and financial costs continues to encourage farmers to remove habitat and put up fences like the one shown here to keep wild critters out. Unfortunately, the environmental costs are considerable.

In the end, the frog fence has little to do with the vineyards. Indeed, some research shows that red wine consumption may actually protect humans from food-borne diseases like E. coli. Also, a few years ago an article published by the American Society for Microbiology reported that scientists were proposing a wine-based spray disinfectant since the malic and tartaric acid in wine kill bacteria as efficiently as hydrogen peroxide-based disinfectants. Both Pinot Noir and Chardonnay were shown to kill E. coli and salmonella. To our knowledge, no one has yet proposed washing fruits and vegetables in Chardonnay or Riesling, but why not?