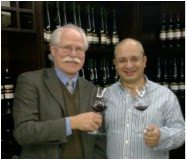 It’s rare that one encounters a true wine pioneer. But Omar Zumot is undoubtedly the preeminent wine pioneer of Jordan. He had an early interest in winemaking and received his training in Ardeche while still in his teens, but it was twenty years later when he realized his dream of planting a vineyard that would reveal to the world the potential of Jordan for making fine wine. Omar is pictured here with Editor, Don Winkler, at his wine shop in Amman. Go to this site to hear Omar live.

In 1996, Omar planted his first vineyard of eight hectares at Madaba, southwest of Amman near the old St. George church, using plants imported from France. The vineyard has soils of clay and limestone and are at an altitude of 735 meters. Today, the fruit from this vineyard is mostly used to produce the Saint George Classic blend, his mid-priced range of wines.

The Madaba vineyard produces good fruit, but Omar wanted something still better, and after an exhaustive search found a site in Samas al-Sarhan near the border with Syria and south of the extinct volcano Jabal Druze, which contributes basalt to the clay-limestone soil mixture. The deep clay helps hold the moisture from the winter rains. The 600 meter altitude ensures cold nights to counterbalance the hot days of the growing season. Significant diurnal temperature variation helps create the perfumes of the wines produced from this site. Minimally irrigated, the vines are subject to considerable hydric stress. Planted mostly to Cabernet Sauvignon, Syrah, Chardonnay, and Merlot, the vineyard currently has about 2000 dunums (about 200 hectares) of vines and is growing by about 500 dunums per year. The fruit from this vineyard is used to produce the top of the line Winemaker’s Selections.

Recently, a third vineyard was added to the Zumot stable. Located in the mountains of Jerash in an area called Souf, this seven hectare vineyard is very high altitude (1150 meters), dry farmed, and planted to Merlot and Syrah. The Roman ruins of Jerash are pictured here (photo by D Winkler).

The Zumot vineyards are organically certified by IMO of Switzerland. No pesticides, herbicides, or chemical fertilizers are used, but the vines do receive nitrate-rich waters from fish ponds stocked with carp. Yields are very low, less than two tons per hectare [0.8 tons/acre], and all vineyard work is done by hand. The hard labor is done mostly by Bedouin women of the nearby villages.

While Omar provides the inspiration and management of the vineyards and winery, he is assisted in the winemaking by two winemakers originally from Bulgaria; most of his wine is produced naturally with ambient yeasts and is aged in French Chassin barrels.

The Zumot Winery Saint George wines were tasted at Omar’s offices in Amman and the International Wine Review offices in Washington, DC. There is a definite house style, influenced by the terroir of the vineyards, the ripeness of the fruit, and the lavish use of toasty, French oak. The whites tend to be aromatic and soft, with modest levels of natural acidity. The reds show ripe fruit, toasted oak, and fine-grained tannins. Omar attributes the depth of flavor to extra thick skins, a result of the strong winds that buffet the vines. Most of the wines tasted are from the 2009 vintage, which had an especially mild winter and summer with ten days longer maturation than normal. The 2008 vintage saw a cold winter with late frosts and extremely hot summer.

Our favorites among the white wines are the Chenin Blanc and Chardonnay. The Saint George 2009 Chenin Blanc Winemaker’s Selection from the Samas Vineyard is pleasantly aromatic, showing stonefruit, melon and vanilla on the nose and flavors of buttery pear and peach. It’s soft on the palate. The golden Saint George 2009 Sauvignon Blanc Winemaker’s Selection reveals honey, tropical fruit, and smoke. Omar says the smoke comes from the volcanic ashes in the soil and not from the six months the wines spends in double toasted French oak barriques. The yellow straw Saint George 2009 Chardonnay Winemaker’s Selection has notes of mango and pineapple on a nicely balanced palate with hints of butterscotch and smoke. It pairs superbly with grilled chicken. The Saint George 2009 Gewurztraminer Classic Range has good varietal character, showing rose petal and stone fruit on the nose, while lychee and guava are more prominent on the palate. It’s a light and delicious wine.

For tourists or business travelers planning a trip to Jordan, we strongly recommend trying Omar Zumot’s Saint George wines. They can be purchased at his store or at the better, wine-serving restaurants around the city. Unfortunately, the wines are not yet sold in the US.

2 Responses to Jordan’s Wine Pioneer: Omar Zumot and the Wines of Saint George.