The Sweet Malbecs of Argentina 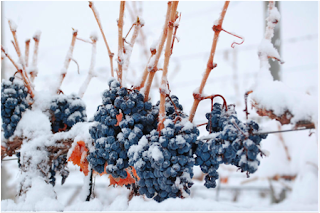 Our just published Report # 27 Sweet Wines of the World reviews hundreds of sweet wines, including the unique and delicious late harvest and fortified Malbecs of Argentina. This article was previously posted on our home page.

The whole world knows that Argentina makes excellent wines from the Malbec grape, but not many people are familiar with its superb late harvest and fortified Malbecs. These wines are made from super-ripe grapes harvested late in the autumn in the high altitude vineyards of the foothills of the Andes. Sometimes snow falls before the grapes are picked [see the picture, courtesy of Belasco de Baquedano].

Grapes left on the vine a long time tend to dessicate, resulting in juice with high sugar content and ripe, Port-like flavors. The juice is allowed to ferment to the desired level of sweetness, and then fermentation is stopped. In the case of late harvest wines, fermentation is most commonly stopped by cooling the wine sufficiently. In the case of fortified wines, the addition of alcohol stops the fermentation process. In both cases the wine ends up moderately sweet but with relatively low alcohol in the first instance and relatively high alcohol in the second.

On our recent tour of Argentina’s wine country, we encountered several late harvest and fortified Malbecs. The best ones are reviewed below. Reviews of other sweet wines, as well as hundreds of dry table wines, were published in our Report #26, The Diverse Wines of Argentina. A much more extensive review of sweet wines can be found in our Report #27, Sweet Wines of the World.

Winemaker Roberto Cipresso has made a beautiful, sweet (112 g/l) dessert wine from very ripe, late harvested Malbec grapes . The nose shows port like aromas and flavors of sweet dark red cherry and plum, dark chocolate, and loam. While fairly high in alcohol (16.6%), it appears almost light on the palate. Absolutely delicious. Too bad it’s only available in very limited amounts at the winery.

Antracita is an exceptional, late harvest Malbec sourced from 100 year old vineyards in Alto Agrelo. Opaque ruby violet in color, it shows aromas and flavors of violets, dark chocolate, ripe figs, and dark cherry. It is unctuous in texture with a lush, velvet like mouthfeel. It finishes very long and rich with persistent chocolate and cherry notes. Aged in new French Allier oak sur lie for 24 months, it has 93 g/l sugar and 14.5% alcohol. Importer: Cabernet Corporation.

The natural sweetness (117 g/l) of this wine means it is less alcoholic (13.5%) than most Malbecs that are fermented dry. A beautiful dark ruby color, the wine shows ripe red plum and dark cherry, shaved chocolate, tobacco, and a note of Christmas spice. Unctuous fresh black raspberry fruit appears on the palate along with dark chocolate and tobacco notes. Finishes very, very long. Made with natural yeast and fermented in barrel until fermentation is naturally halted by the cold. Importer: Vine Connections.

Very mature, raisin-like grapes are lightly crushed to produce this dark ruby, ripely flavored wine. This fortified Malbec wine shows chocolate, ripe dark cherry and plum fruit on the nose and palate. At 100g/l sugar and 18 percent alcohol, this is a wine that can be paired with bleu cheese. Has a long finish of dark red fruit with quite dry tannins. Spends 24 months in French oak. Importer: Frederick Wildman and Sons.

Zuccardi’s Malamado, the first Malbec fortified wine to be produced in Argentina, is pleasantly light in tone and shows a fresh spicy cherry aroma. While fortified and Port-like with 18% alcohol, it avoids the cooked flavors of many such wines and instead offers a core of fresh and dried cherry fruit. Aged two years in barrique with sweet, ripe fruit, it takes on leather, membrillo, and caramel notes, but it’s the fresh fruit core that we like. Delicious and very reasonably priced to boot. Winesellers, Ltd.

This entry was posted in Argentina and tagged Malbec. Bookmark the permalink.