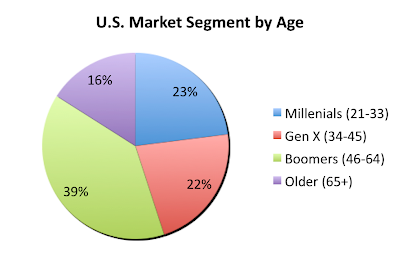 According to the latest statistics, America consumed more wine (3.96 billion bottles) than France (3.85 billion bottles) in 2010. While per capita consumption continues to decline in most of Europe, it has almost tripled in the US over the past 40 years.to about 3 gallons per adult. But here the US loses to France, which consumes more than three times as much per capita at the US.

Not only is wine consumption growing among the young, they are also more experimental and especially willing to purchase imported wines. But as a product, wine has surprisingly little brand loyalty. Taking these facts together, this means that with the right distribution new producers and newly imported wines can quickly have great success. On the other hand, maintaining that success may be challenging.

European and other exporters of wine to the US also have to take into consideration different consumption patterns. In contrast to Europe where wine is mostly consumed with the meal, in the US almost 60 percent of consumers drink wine as an aperitif or cocktail. This is, of course, in keeping with our colonial traditions. In his book on Thomas Jefferson and Wine, John Hailman reports that the citizens of the newly independent US tended to drink their wine after the meal, not during the meal. Perhaps this was because much of their wine was fortified and sweet. The fact that people so often drink wine by itself today may partly explain the apparent preference for fruity wines with slightly sweet palates and soft tannins. White Zinfandel is still one of America’s favorite wines. And sales of Malbec, a wine appreciated its for fruit forward character and its gentle tannins, have taken off in recent years [see our recent report The Diverse Wines of Argentina].

Those developing marketing strategies might also want to take account of the fact that women purchase three-quarters of all wine in the US, according to the Wine Market Council. But they consume only their fair share.

This entry was posted in France, Markets and tagged United States. Bookmark the permalink.

1 Response to US Beats France in Wine Consumption: Young Adults Lead the Way