A principal theme of Report # 26 The Diverse Wines of Argentina is the variety of wines and the multitude of winemaking regions in Argentina. The Bonarda grape, which twenty years ago was the most widely planted grape in the country, is part of that diversity. Bonarda is a grape that is largely unknown outside Argentina, but it is the backbone of most wine produced for domestic consumption, and it can produce quite attractive, easy drinking wines. In our tastings and our travels in Argentina, we tasted over 600 wines. We found a number of Bonarda and Bonarda Blend wines that we liked a lot. There’s a list of our favorites [all rated 88 or above] at the bottom of this article.

In 1990 Bonarda was the most widely planted varietal in Argentina with 10.2 thousand hectares compared with 9.6 for Malbec. However, with the tremendous success of Malbec over the past decade, by 2009 Malbec plantings had increased to 24 thousand hectares, compared to 19 thousand for Bonarda. Bonarda is planted all over Mendoza with some concentration in the eastern region.

There is still much confusion about the origin of Argentine Bonarda. For many years, experts weren’t sure whether this grape was actually Bonarda Piedmontese, which comes from the Piedmont region in Italy, or whether it was Bonarda Novarese also from Piedmont and known as Uva Rara. Still others claimed it was Oltrepo Pavese, also know as Croatina in the Veneto or the “dulce nero “ Dolcetto. Recent research by French and Argentine ampelographers has now shown that Argentine Bonarda is most likely the rare French grape Corbeau from Savoie and may be related to California’s Charbono.

Most Bonarda, as noted above, is currently planted in vineyards in the eastern region of Mendoza. This region has a dry, warm and sunny climate, relatively deep alluvial soils, and abundant water for flood irrigation. Bonarda grows vigorously under these conditions, and careful vineyard management is required to avoid over cropping and dilute, low quality fruit. Bonarda is thin skinned, has tight clusters, and is susceptible to rot, so the dry dessert-like conditions in eastern Mendoza help maintain healthy fruit.

For a large part of its history, Bonarda was used as a blending grape, or to make pink wines. Today it is also being produced as a single varietal in a variety of styles. The most common style is one that is easy-drinking and juicy, offering aromas and flavors of black cherry, raspberry and plum. Wines in this style are generally dark in color with a velvet texture and round tannins; they are usually sourced from high yielding vineyards, fermented in stainless steel with little or no oak and are offered in a “joven” or young style, at budget prices by Alamos, Argento, Hector Meli, Nuno, Tilia and other wineries.

Bonarda is also being produced in a somewhat more interesting format with more complexity and nuance. These wines are sourced from old Bonarda vines, different vineyards, and are often aged in oak. The Trapiche Broquel Bonarda, for example, is a blend of grapes from old vineyards of the Valle de Uco, Ugarteche and Santa Rosa and spends 9 months in barrel. Others of interest include the Altos Las Hormigas Colonia las Liebres, the Ksana Bonarda, and those of Nieto Senetiner, Valle de la Puerta and Zuccardi. To our knowledge, there are no super premium single varietal Bonarda being produced in Argentina today, but there are some high quality blends.

Bonarda performs extremely well as a blending grape, providing color and flavor to red blends. It is commonly co-fermented with Cabernet Sauvignon, Syrah and Malbec, sometimes taking the lead role and in other cases a smaller share. The Tikal Patriota is one of the more successful blends; it is composed of 60% Bonarda and 40% Malbec aged in oak with fruit from Rivadavia and Altamira. Bodega Vistalba and Kaiken combine Bonarda with Malbec, and either Cabernet Sauvignon or Petit Verdot.

The Future of Bonarda

There is a spirited debate about the future of Bonarda, the question being, will it play a significant role in the diversification of Argentina’s wine production. And, will it ever be as successful as Malbec? These are questions we explore in Report #26. Wine writer Oz Clark may be right in noting that, “Bonarda could easily be Argentina’s Beaujolais, and Bonarda Reserva could easily do the job of Beaujolais’ top ‘Cru’ villages.” Needless to say, there is a lot of Bonarda available to do the job and the price per ton or kilo is one quarter the price of Malbec, which translates into very affordable prices on the store shelf. 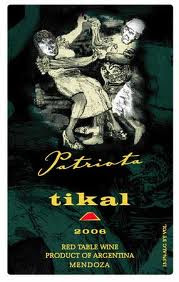 This is one in a series of articles on Argentine wine. Click on the following for articles on Torrontés, Late Harvest Malbec, Humberto Canale, Familia Schroeder, and Argentina’s President of Education (and Wine).

This entry was posted in Argentina, Red Wine and tagged Bonarda. Bookmark the permalink.

1 Response to The Best of Bonarda: Argentina’s Second Red