Wine in the part of Patagonia that is now officially called the Alto Valle del Rio Negro has a fascinating history that culminates in today’s excellent and often elegant Malbec, Pinot Noir and other wines. While the region still has few wineries, it has some of the most famous in all of Argentina—Chacra, Noemia, and, of course, Humberto Canale.

Shortly after the famous Campaña, in the late 19th century, the English constructed a railroad (El Ferrocarril del Sud) running from the Atlantic Coast to Neuquén, paving the way for further development of the Rio Negro Valley. Recognizing the potential of the area for growing orchard fruit, the railroad was quickly followed by construction of a dike and canals to irrigate the valley using the water of the Rio Negro. Plans were developed and by the early 1920s a system of canals had been constructed creating an oasis 8 km wide and 110 km long.

One of the hydraulic engineers brought in to help plan and construct the canals was young Humberto Canale who purchased land from General Roca to plant vines (Cabernet Sauvignon, Malbec, Merlot, Semillon, etc.) and later founded his winery. That winery is today almost 100 years old. 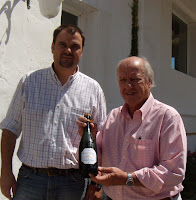 President Guillermo Barzi (pictured here on the right) and winemaker Horacio Bibiloni (on the left) graciously received us at the winery last week. Guillermo gave us a brief history lesson, complete with map and pointer, and Horacio led us through the winery’s current portfolio. We’ll report our evaluations of the wines in our upcoming report on the wines of Argentina. Suffice it to say, we were very pleased with what we saw and tasted. The wines—especially, the Pinot Noir, Merlot, and Malbec—have all gained in elegance and complexity since our last tasting five years ago thanks in part to the advice of two of Argentina’s most famous consulting winemakers, Susana Balbo and Pedro Marchevski.

This entry was posted in Argentina and tagged Malbec, Pinot Noir. Bookmark the permalink.