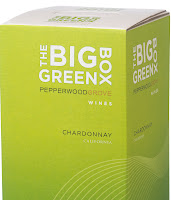 While attending the Society of Wine Educators 34th annual conference last week, we had the opportunity to taste a good quality California Chardonnay from Pepperwood Grove, one of the Don Sebastiani & Sons brands. What is most surprising, the wine comes packaged in a type 7 plastic bag in a box, in this case called The Big Green Box, and its price is equivalent to less than $5 per bottle.

Boxed wine is one means that wineries can reduce their carbon footprint as the container holds the equivalent of four 750 ml bottles of wine, weighs very little, and is more easily recycled than glass bottles. In addition, there is very little wastage since the wine keeps over a month and can be consumed by the glass, not by the bottle, or, more accurately, by the box.

Since the Chardonnay was so good, we asked Michael Peck of Don Sebastiani & Sons to send me the other Pepperwood Grove wines sold in a box, including a California Pinot Grigio, a California Old Vines Zinfandel, and a Chilean Valle Central Cabernet Sauvignon. I’ve now tasted all four, with the Chardonnay and Cabernet Sauvignon being my favorites. My notes on those two wines follow:

Pepperwood Grove NV Big Green Box Chardonnay California 3 liters ($19)
This super value (less than $5 per 750 ml bottle equivalent) is a more nuanced wine than most California Chardonnays costing twice as much. It shows vanilla, toast, and light orchard fruit on the nose and palate. More importantly, these flavors are in balance with low residual sugar, unlike many of the cloying, low-priced Chardonnays on the supermarket shelf. This wine won’t cause the vignerons of Montrachet to quake in their boots, but if you give this wine blind to your most snobby wine friends, they’ll guess it’s a considerably more expensive wine. It’s a blend of 88 percent Chardonnay and 10 percent Chenin Blanc with a splash of Viognier.

Pepperwood Grove NV Big Green Box Cabernet Sauvignon Valle Central Chile 3 liters ($19)
Cabernet Sauvignon is the most widely planted varietal in Chile, and for good reason. The benign climate of the Valle Central permits high yields of good quality, which is why one can find so many good Chilean Cabernets selling for under $10 per bottle. Well, here’s a boxed Cabernet selling for the equivalent of under $5 per bottle. This is a fruit-rich, fresh tasting wine showing rich dark plum aromas and flavors. As can be expected of a wine at this price, the flavor profile is quite straightforward, and the tannins are very gentle, but it is undeniably a great value.