Pairing Soalheiro Vinho Verde and the Cuisine of Restaurante Ferrugem 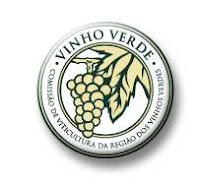 Last week we had the unique opportunity to pair the best Alvarinho from Vinho Verde with the exquisite cuisine of Dalila and Renato Cunha at their Restaurante Ferrugem located in Vila Nova de Famaliação, located just south of Braga in the Minho region, home to Vinho Verde. The wines were provided by Luís Cerdeiro of Quinta do Soalheiro.

The Quinta do Soalheiro is located in Melgaço, near the Minho River that divides Portugal from Spain. Today Luís Cerdeiro, son of the founder, and his siblings João and Maria run the estate, but it was their father João Antonio Cerdeiro who pioneered in planting the Alvarinho grape in Vinho Verde in 1974, over 35 years ago. Today Soalheiro arguably makes the best expression of Alvarinho in Vinho Verde.

We tasted Soalheiro’s complete wine portfolio over a long six course dinner. We started with an assortment of appetizers and the 2007 and 2009 vintages of a new wine—Giro Sol, made from the Loureiro grape grown in the Lima Valley just 15 km from the Atlantic. This Vinho Verde is produced by a partnership of Soalheiro and Dirk Niepoort.

The meal itself began with the methode champenoise Soalheiro Espumante Alvarinho paired with smoked mackerel and caviar. Next came the 2009 Soalheiro Classico married to alheira de caça, a sausage made of game meat, bread and spices. This was followed by two different vintages—2008 and 2009—of Alvarinho Primeiras Vinhas (partially and lightly wood fermented) matched to bacalhau on a bed of sautéed vegetables. Next 2008 Alvarinho Reserva (100% barrel fermented) accompanied meat from the local breed of pig called Bísaro with a puree of fava beans. Finally, we ended with the 2009 Docê Alvarinho, a low alcohol, lightly sweet dessert wine and goat cheese with strawberry marmalade.

All told, it was a wonderful pairing that showed off both the special wines of Soalheiro and the unique Minho cuisine as interpreted by Restaurante Ferrugem. A word of warning if you’re thinking about visiting Ferrugem—it’s devilishly difficult to find. Do yourself a favor and get the GSP coordinates from their web site.

This entry was posted in Portugal, White Wine, Wine and Food and tagged Vinho Verde. Bookmark the permalink.