Raats Wine: The Loire in Stellenbosch 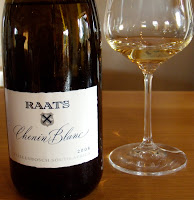 Raats is a rarity in South Africa—a winery that specializes in just a couple of varietals. In this case, it’s Chenin Blanc and Cabernet Franc, which just happen to be two of the most popular varietals of the Loire. Since we’re in the process of preparing a report on the wines of the Loire, it seemed appropriate to pay a visit to Bruwer Raats and his winery located in the Polkadraai Hills south of Stellenbosch. Reading that Bruwer put his eight year old 2001 Cabernet Franc up against a 2001 Cheval Blanc at a trade show held at London’s Tate Modern late last year further stimulated my curiosity. According to the reports I’ve seen, the Raats Cabernet Franc did very well in the matchup.

Bruwer sources his fruit from older, low yielding vineyards that have the diverse soils characteristic of the Stellenbosch area—decomposed granite and quartz and Table Mountain sandstone. The grapes are vinified separately, parcel by parcel, and later blended to create what are among South Africa’s most successful Chenin Blanc and Cabernet Franc. The US importer is Cape Classics.

Tasting the wines, I was impressed with the typicity of both varietals. The Chenin Blanc doesn’t have the palate complexity of the best from Vouvray or Montlouis, but in terms of aroma and mouthfeel is it very good indeed. The Cabernet Franc has the aromatics of a first rate Chinon. It provides as much depth and richness on the palate, but perhaps less elegance, than the best offerings of producers like Charles Joguet and Bernard Baudry. My full tasting notes follow:

Raats 2009 Original Chenin Blanc Coastal Region ($13) 88
The unoaked Raats 2009 Original Chenin Blanc is tropical fruit salad in the glass with notes of honeysuckle, mango and citrus showing on the nose and palate and nice persistence on the finish. It has good acidity that contributes to its freshness. A straightforward, honest wine, the Original is quite delicious and would be a good match to many mildly-spiced Chinese dishes. Has 2.2 g/l residual sugar. Made from dry-farmed, 25 year old vines yielding 7 tons/ha. It’s extremely difficult to find another Chenin Blanc of this quality at this price in the US.

Raats 2007 Cabernet Franc ($29) 91
This is an exceptional Cabernet Franc with earth, herbs, tobacco, notes of clove and cinammon and an impressive intensity of dark berry and cherry fruit on both the nose and in the mouth. Good minerality shows on the beautifully balanced and integrated palate. Made from dry-farmed bush vines grown in decomposed granite soils and aged 14 months in French oak, 30% new.

Not one to rest on his laurels, Bruwer recently entered into a joint venture with winemaker Mzo Mvemve to produce a red Bordeaux blend called MR de Compostella, which has received high ratings from the UK press. Neil Pendock interviewed the winemakers recently: http://blogs.timeslive.co.za/pendock/2008/05/18/the-mvemve-raats-interview-in-full/