In this article, we report on our tasting of the wine and food of Thomas Jefferson with special focus on Champagne and the recipes Jefferson acquired while living in France. Our tasting included the Champagne from one of his favorite growing areas—Sillery—and some of the dishes he would have enjoyed in Paris. Jefferson brought recipes for these dishes back to Monticello, along with his chef newly trained in French cooking—James Hemings, brother of Mary Hemings, who also joined the Jefferson household in Paris.  These recipes are included in a book assembled by Jefferson’s granddaughter Virginia Randolph and published later as Thomas Jefferson’s Cookbook. We’ll write more about the Champagnes of Sillery and other regions in our upcoming report, Champagne: Diversity and Change.

Thomas Jefferson loved fine wine and Champagne. In 1784 the US Congress sent him to Paris as ambassador, replacing Benjamin Franklin, and he remained there until 1789. While there he took the opportunity to learn about the wine and food of Europe, especially France, where he traveled to all the famous wine regions, tasting as he went. In 1788 he made a four day trip to Champagne where he identified what he considered were the best wine producing villages or crus: Aÿ, Hautvilliers, Epernay, Cramant, Mesnil, and Verzenay. He developed a special fondness for the Champagnes of the Marquis de Sillery who had extensive holdings in Mailly, Verzy and Verzenay as well as Sillery. Upon returning to the US,  he continued to purchase Champagnes, especially Sillery, for his personal use, for George Washington, and for entertaining at the White House while he was President. 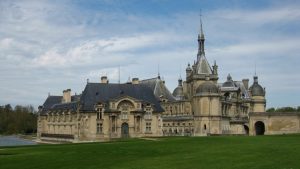 Jefferson loved fine cuisine as much as he did fine wine, and he brought his slave James Hemings to Paris specifically to learn how to prepare French cuisine. James, by the way, was the brother of Mary Hemings, who also later joined the Jefferson household in Paris.  James received professional training at several locations, most importantly  at the Chateau Chantilly (made famous for its food by François Vatel), said to have food superior even to Versailles. James Hemings later became the chef de cuisine at the Hôtel de Langeac, Jefferson’s private residence and the de facto embassy, where he supervised a large French kitchen staff.

Upon return to the US, James Hemings popularized French recipes for meringues, crème brulée, ice cream, French fries, and even macaroni and cheese to the US.  He also developed a style of Virginia-French fusion cooking that influenced the cuisine offered at Jefferson’s famous White House dinners and subsequently spread throughout America. Some of the recipes were revolutionary at the time (and regarded as un-American by Jefferson’s political opponents), although their widespread adoption makes them seem commonplace today. 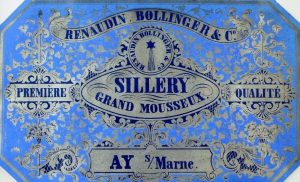 These Jefferson inspired dishes were paired with Champagnes made from grapes grown in the Sillery cru by the only grower, François Secondé, still making Champagne exclusively from that village.  While some of Champagnes most prestigious labels, most notably Moët & Chandon and Ruinart, source fruit from Sillery, they use it for blended cuvées as is the tradition in the Champagne houses. Chardonnay from Sillery is a major component of the prestige cuvée Dom Ruinart, and Louis Roederer, Charles Heidsieck and Bollinger [see label] previously made a Sillery cru.

THE CHAMPAGNE OF JEFFERSON’S TIME

The Champagne of Jefferson’s time would have been different from that of today. The principal red grape would most likely have been the same as today, Pinot Noir, but the white grape could have been Pinot Blanc or a clone of Chardonnay or a mix of other varieties.  At the time, no distinction was made between Pinot Blanc and Chardonnay. Jefferson’s preference (like that of French gourmets at the time) was for the non-mousseux style of Champagne, although he certainly would have tasted mousseux as well.  Indeed, given the popularity of sparkling Champagne in England as early as the 17th century (well before it was even produced in France), Jefferson undoubtedly would have known the drink well before his appointment as ambassador to France.

While it’s not possible to replicate the Champagne—sparkling or still—that Thomas Jefferson drank, the Champagnes of the François Secondé estate come close. In addition to making sparkling Champagnes from Sillery fruit, they also make the still wines that Jefferson preferred–Coteaux Champenois Sillery Blanc and Coteaux Champenois Sillery Rouge. The warming climate and Secondé’s tendency to pick late means today’s wines are richer and fruitier than what Jefferson would have known, but the influence of oak and low alcohol would seem familiar.  Jefferson might also have consumed vin gris, a still white wine made from red grapes, most likely Pinot Noir; this wine is no longer produced in Champagne. 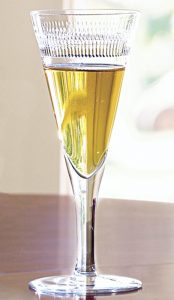 While we try to be as authentic as possible in the selection of food and wine, one thing we do not do is replicate the way Thomas Jefferson would have drunk his Champagne. Jefferson consumed his Champagne and other wine in small, 6” flute-like wine glasses, and his habit was to drink fine wine at the end of the meal, not with the meal.  This was in keeping with the trends in France where Champagne was served between the main course and dessert and often served very chilled, or frappé.  While he loved both fine food and fine wine, his writings do not indicate that he attached much importance to the pairing the two.

Françoise Secondé makes two still Champagnes from the Sillery Grand Cru, a Blanc and a Rouge. All the Secondé Champagnes are imported by AP Imports, which generously provided the samples for this tasting and food pairing.

François Secondé NV Coteaux Champenois Sillery Blanc Sillery Grand Cru ($53) 92 This “still” Champagne is probably most like what Thomas Jefferson would have purchased and consumed from the Sillery estate in the late 18th century. Made of Chardonnay and Pinot Noir vinified and matured in oak barrels and vats, it has a definite yellow straw hue and a fragrant, almost pungent bouquet of smoky herbs, resin, almonds, cling peach and orange zest. It’s full and flavorful on the palate, mirroring the bouquet with additional dried stone fruit notes. Dense, very flavorful, and original, firm acidity keeps the wine balanced and fresh and a perfect companion for hearty fare.

François Secondé NV Coteaux Champenois Sillery Rouge Sillery Grand Cru ($53) 91  This 100% Pinot Noir made from 60 year old Sillery vines and vinified and aged in oak barrels and vats for at least 12 months reminds us of the time centuries ago when the red wines of Champagne enjoyed unparalleled popularity. This “still” red Champagne offers incisive aromas of dark red cherry that seamlessly continue on to a fresh and fleshy palate complicated by a sense of earth and spice. Finishes dry with a hint of smoke. Under 12% alcohol!

Secondé also makes several sparkling Champagnes including Brut, Blanc de Noirs, Blanc de Blancs and Rosé.  The Blanc de Blancs Millésime is sourced from a single vineyard parcel. Also, tasted here is a rare single cru bottling from the tiny (just 18 hectares of vines) Puisieulx Grand Cru that is located adjacent to Sillery and most likely also provided fruit for the Sillery Champagnes of the 18th and 19th centuries. Ruinart also owns vineyards in Puisieulx, and Chardonnay from this village often finds its way into their Dom Ruinart blend.

François Secondé NV Sillery Brut Grand Cru Montange de Reims (Sillery) ($50) 92+  If we had to pick just one of the Françoise Secondé Champagnes for a dinner, this would be it. It’s a delicious, very well made sparkler that complements rather than competes with food, and we found it pairs well with a wide variety of dishes. On top of all that, it’s very reasonably priced. It’s fresh with striking purity, a lively mousse, and exuberant on the palate, showing notes of dried fruit, nuts, clementine, and a hint of red raspberry. Not at all shy, it shows good depth of flavor that persists on the finish. Made from vines with an average age of 40 years. Disgorged June 2018 with 8 g/L dosage.

François Secondé NV La Loge Blanc de Noirs Grand Cru Montagne de Reims (Sillery) ($60) 93 The exuberant La Loge Blanc de Noirs is made from some of the best Pinot Noir parcels of Sillery. Very fresh and bright, it reveals an especially lively mousse with hints of pink grapefruit and spice that run from the fragrant bouquet through a mouth filling palate of excellent depth and definition. It finishes long with firmness and clarity. 8 g/L dosage.

DISHES PAIRED WITH THE WINES

We attempted to recreate some of the dishes that Thomas Jefferson would have enjoyed with his Champagne in Paris, Monticello and the White House. 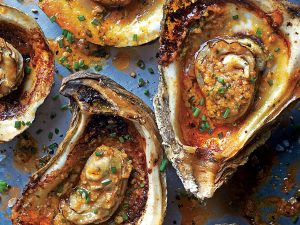 Grilled Oysters on the Half Shell with Shallots, Butter, Paprika and Cayenne Pepper  These meaty and lightly spiced oysters were a seamless pairing with the Sillery Brut. While Jefferson would have enjoyed oysters from the Chesapeake, the still warm waters of the bay led us to instead select Wellfleets and Cotuit Bay Oysters from Cape Cod.

Fresh Pea Soup with Toasted Croutons  Vegetables, especially green peas, were a Jefferson favorite who regarded meat as an accompaniment to vegetables rather than the other way around. This soup was made with fresh peas rather than dried split peas and enriched with fresh heavy cream and croutons.  Our favorite pairing for this very fresh and creamy soup was the La Loge Blanc de Noirs.

Chicken Fricassée   The cream-heavy chicken dishes in the Thomas Jefferson cookbook would undoubtedly have gone superbly with the bright acidity of the Secondé Champagnes, but we decided on a less rich but no less flavorful recipe from another American Francophile, Julia Child.  Every Champagne could be drunk with this dish, but our first preference is for the Brut, which complemented rather than competed with the complex flavors of the dish.

Ragoût de Veau   Given the time of the year (autumn), we also took some liberties with Jefferson’s recipe for veal stew, adding a generous amount of root vegetables and fresh garden herbs that will soon disappear until the spring.  With a sauce made from veal stock and white wine, this dish is light but earthy and paired exceptionally well with the Coteaux Champenois Blanc. 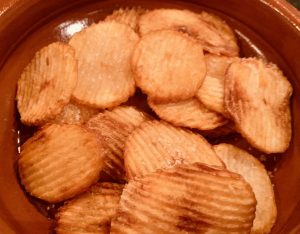 Jefferson French Fries  One of the dishes James Hemings discovered in Paris was French fries. We prepared them as he would have made them at Monticello, cut in rounds, fried twice, and served immediately so the fries were crisp on the outside but creamy inside.  Almost any high acid wine goes beautifully with fried foods, so we had no favorite.

Cheeses  Thomas Jefferson is most famously associated with the 1,325 pound “mammoth cheese” that the Baptist dairy farmers of Cheshire, Massachusetts, presented to him in 1801 in appreciation for the statute of religious freedom he had written. Most likely, cheeses like this made from cow’s milk with a mild Cheddar flavor would have been among those served at the White House. But one can presume that Jefferson tried every imaginable cheese during his five years in France, and we know that he studied the making of Parmesan cheese and served it when he returned to the US.  Hence, we selected one French cheese, a creamy Fromager d’Affinois, which we knew would make any Champagne shine, and an aged Parmesan Reggiano, which we loved with the Coteaux Champenois Rouge.

Jefferson’s Map of Champagne from his 1788 Trip