Wines of the East Coast: Rapid Progress on Many Fronts 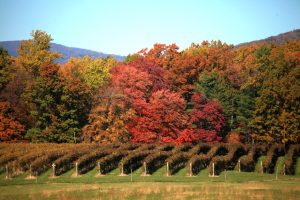 The wines of the East Coast are making progress on many fronts.  Noteworthy improvements in the quality of East Coast wines and their unique character are attracting growing numbers of wine enthusiasts. Today, more than ever before, consumers along the Atlantic Seaboard are interested in drinking local wines, and liberalized wine laws and regulations make it easier for them to do so. Their thirst for good wine and for learning more about the wines made in their own states is driving a dramatic growth in wine tourism and rising wine sales direct to consumers in tasting rooms and wine clubs. 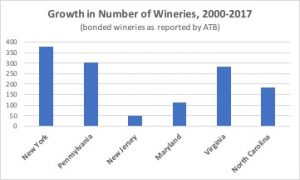 In the light of these developments, the International Wine Review (IWR) is publishing a series of reports in 2019 on the wines of the East Coast. Three reports covering the Finger Lakes, Maryland and New Jersey have already been published.  Prepared in collaboration with state wine associations and the Atlantic Seaboard Wine Association, each report in the series focuses on the wineries, winemakers, vineyards, the regulatory framework and future prospects of the industry in each state.  The reports also include extensive tasting notes and ratings of the principal wineries in each state.  The reports are based on extensive field research, tastings and interviews with local winemakers and industry leaders.

This series of reports covers a large geographic area, from North Carolina in the south to New York’s Finger Lakes 800 miles to the north.  The states included in the series—New York, New Jersey, Pennsylvania, Maryland, Virginia and North Carolina—have about 20 thousand acres of wine grapes, and New York has over half the total, as shown in the graph of wine grape vineyards below.  These states and the regions within them differ in terms of terroir, wine history, grape varieties grown, and development path of the wine industry. However, they are in many respects more similar than different.  In this preface, we examine the similarities. The individual reports explore the unique features of each growing area. 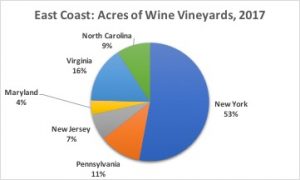 Wine production has a long and colorful history in the East. Up and down the coast, one of the first things European settlers tried to do was grow grapes and make wine. They saw a profusion of wild grapes, from the Muscadines of the south to the Labruscas of the north, giving hope they could grow the European varieties familiar to them. They all failed: Lord Baltimore in Maryland, Thomas Jefferson in Virginia, William Penn in Pennsylvania, etc., and soon began making wine from native grapes (e.g., Concord, Isabella, Scuppernong) and chance hybrids (e.g., Catawba, Niagara). Later on, in response to phylloxera, French agronomists developed large numbers of French-American hybrids, several (e.g., Chambourcin, Seyval Blanc, Vidal Blanc, Vignoles), of which are still widely grown throughout the East, thanks in part to a Baltimore journalist, Philip Wagner, who advocated on their behalf throughout the East. The European grape, vitis vinifera, only took root with the advent of modern fungicides and the development of techniques to prevent winter kill, popularized by Dr. Konstantin Frank in the Finger Lakes in the 1950s.

After Prohibition, the states sought to regulate the wine industry by discouraging entry and prohibiting single ownership of all three tiers—production, distribution, and retail. Wineries were thus prohibited from selling wine at the winery and from directly distributing wines to retail stores. Wineries could only sell through distributors, which were often uninterested in selling the products of small producers. Some states, like Pennsylvania, set up a state monopoly to distribute and directly sell wines.  With a vested interest in the three tier system, distributors and state monopolies were politically successful in preventing reforms for decades.

Beginning in the 1960s and 70s, states passed Farm Winery Laws to reduce license fees and permit grape growers to sell their own wine at tasting rooms, farm markets, and retail stores. Pennsylvania passed the first such law in 1968, followed by North Carolina (1973), New York (1976), and Virginia (1980). As part of their reforms, most states allowed their wineries to sell direct to consumers, but out of state wineries were prohibited from doing so. In 2005 the US Supreme Court ruled that in state and out of state wineries had to be treated equally. One by one, the states responded by adopting legislation to allow direct shipping from wineries anywhere.

Over the past decade or more, East Coast wineries have begun to put the focus on the vitis vinifera grapes that originate in Europe rather than the grapes native to North America. Hybrid grape varieties have also played an important role, one that may increase with the changing climate.

Growers are learning where to plant grapes and how to match varieties to terroir. Many of the original vineyards in the East were plantings of convenience.  Farmers who could no longer survive off tobacco or dairy cattle planted grapes instead. Or couples looking for a change of lifestyle would build a home and plant a vineyard in a location for its beautiful views. The original plantings were also often to popular varieties like Cabernet Sauvignon better suited to a warmer, drier climate. Today, most new vineyards are being sited only after careful soil analysis and with the advice of viticulture experts, and growers are replanting with varieties better suited to their terroir. 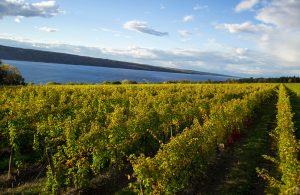 There have always been outstanding winemakers in the East like Jim Law and Michael Schapps in Virginia, Hermann J. Weimer and Peter Bell in the Finger Lakes, Dave Collins and Ed Boyce and Sarah O’Herron in Maryland, John Altamaier and Cameron Stark in New Jersey, Anthony Vietri and Jan Waltz in Pennsylvania, and Chuck Jones and Mark Friszolowski in North Carolina, and the numbers are growing fast. The region is also beginning to attract young winemakers from all over the world. Jacques van der Vyver of Chateau Bu-De in Maryland and Stephen Bernard of Keswick in Virginia hail from South Africa; Gabriel Rubilar of 1723 Vineyards in Pennsylvania is from Mendoza, Argentina; Matthieu Finot of Virginia’s King Family and Morten Hallgren of Ravines in the Finger Lakes come from France; Luca Paschina of Barboursville in Virginia and Davide Creato of Penns Woods in Pennsylvania hail from Italy. Other winemakers come from Germany, Portugal, and, of course, California.

The homegrown winemaking talent is also getting better and better thanks to first rate enology and viticulture training offered at universities and community colleges throughout the East. Of particular note is the viticulture and enology program at Cornell University and the degree programs offered at Surry Community College in North Carolina and the Community College of the Finger Lakes in New York. In addition, the prestigious Food Science departments at Virginia Tech and Penn State house enology and viticulture training and research programs, too. These and other land grant universities like Rutgers in New Jersey and the University of Maryland are home to agricultural extension services that provide assistance to growers.

Even more important, perhaps, is the growing number of agricultural extension agents offering advice on growing grapes and making wine like Joe Fiola in Maryland, Tony Wolf in Virginia, Molly Kelly in Pennsylvania, and Dan Ward in New Jersey. They are assisted by a growing number of viticulture consultants like Lucie Morton and Joyce Rigby and winemaking consultants like Lucien Guillemet and Stéphane Derenoncourt. In addition, winegrowers have formed their own, often informal groups to exchange ideas and taste wines with the goal of learning from experience to improve winemaking.  Virginia’s recently created Winemakers Research Exchange is an especially noteworthy effort to engage winemakers in practical research to improve grape growing and winemaking.

The climate of the East is, in general, humid with rainfall throughout the growing season and the threat of hurricanes around harvest time. This puts a premium on grape varieties that have the thick skins and loose clusters that give good disease resistance. Vinifera varieties like Albariño, Petit Manseng, Vermentino, and Viognier show excellent promise among the whites, and Cabernet Franc and Petit Verdot are especially promising among the reds. French hybrids like Chardonel, Chambourcin, Traminette, and Vidal Blanc do especially well and may be the only varieties than can make good wine in a wet year like 2018.

The climate is warming throughout the Atlantic Seaboard as it is everywhere else in the wine world. This presents problems like heavier rainfall and more frequent extreme weather events, but it also extends the growing season. As a result, over time we can expect continued changes in the grape varieties successfully grown as well as changes in where they’re grown.

All the stars appear to be in alignment for continued improvement in East Coast wine.  In another decade we may very well look back and say there has been a “revolution” in the quality of wines coming from the Atlantic Seaboard. What’s clear at the present is that each state has some outstanding winemakers making world quality wine. At the same time, most wineries are still producing wines of average quality. Raising the average quality of wine depends on many factors: enlightened public policies and support on the part of the states; continued strengthening of extension services and university-based viticulture and enology programs;  new investment to increase the supply of high quality grapes and state of the art winemaking; and more retail distribution of wines to increase their visibility in the market and to strengthen incentives to raise quality and value. As indicated above, we think all of these factors are currently moving in the right direction and promise a very bright future for the wines of the East Coast.

Acknowledgements.  This series of the reports could not have been produced without the significant support of the Atlantic Seaboard Wine Association and the wine associations of the states: the Finger Lakes Wine Alliance, the Garden State Wine Growers Association in New Jersey, the Pennsylvania Wine Association, the Maryland Wineries Association, the Virginia Wine Board, and the North Carolina Wine & Grape Council. Thanks are also due to numerous individuals, especially Grant Crandall, President, the Atlantic Seaboard Wine Association, and to the writers who provide outstanding coverage of East Coast wines, Lenn Thompson (The Cork Report), Carlo DeVito (East Coast Wineries), and Paul Vigna (PennLive.com).