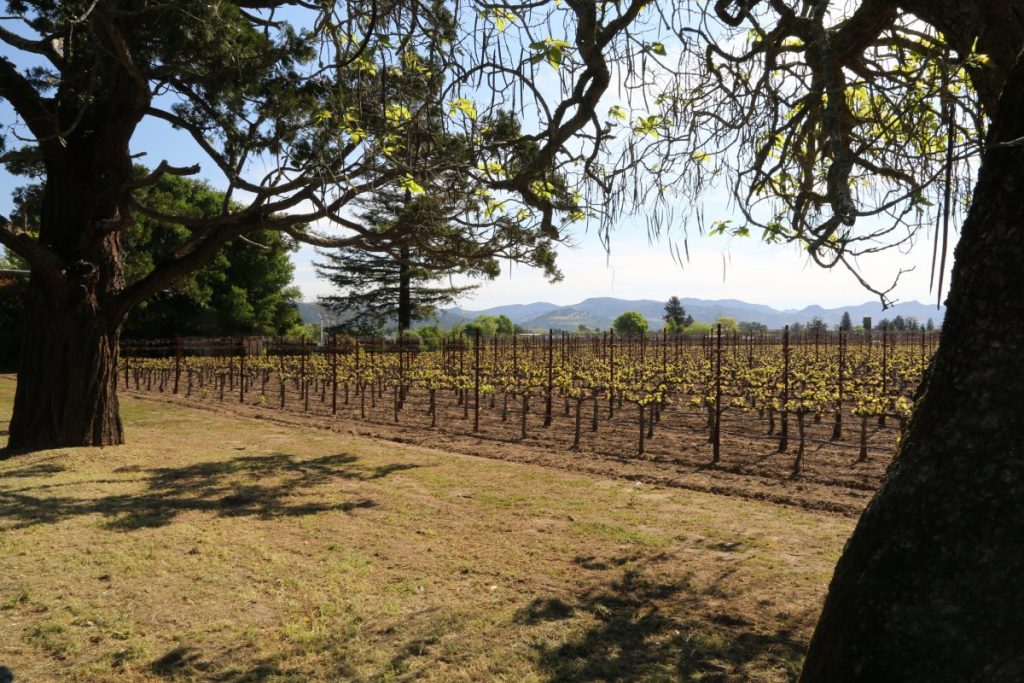 When it comes to Cabernet Sauvignon, the Napa Valley is home to several of the world’s most iconic wineries.  The sheer number of ultra premium Cabernet wineries makes it difficult for small, lesser known producers to gain visibility. Always on the lookout for superb wines at reasonable prices, we recently made a trip to Napa in the search of some of the under the radar gems. In this article we present two of our discoveries from St. Helena–Lewelling Vineyards and Hayfork Wine Company, both of which make their wines from grapes grown  at the Lewelling Ranch.

Lewelling Vineyards is a family affair and has been for a long time.  Since John Lewelling settled Lewelling Ranch in St. Helena in 1864, each subsequent family generation has helped farm the estate.  Over time the family has grown almonds, walnuts, pears, and prunes in addition to grapes.  Today the property consists of 90-acres of vineyards, primarily planted with Cabernet Sauvignon, and 200-acres of uncultivated hillside.   Members of the Wight branch of the family tree manage Lewelling Vineyards and the farming operations of Lewelling Ranch.

The management team consists of brothers Dave and Doug Wight along with Doug’s daughter Haley Wight and Haley’s husband Erik Dodd.  Dave has a degree in viticulture and enology from UC Davis and has served as winemaker and director of Lewelling Vineyards since the brand was established 24 years ago. He continues as consulting winemaker. Doug, after receiving a degree in fruit science from Cal Poly San Luis Obispo, managed vineyards for Martini Winery before opening Wight Vineyard Management in 1983.  Since then he has managed the family vineyard as well as an additional 500 acres of vines in Napa Valley, along with son-in-law Erik since 2004. Winemaker Haley has a degree in earth science and is now among the sixth generation of the family working the ranch. 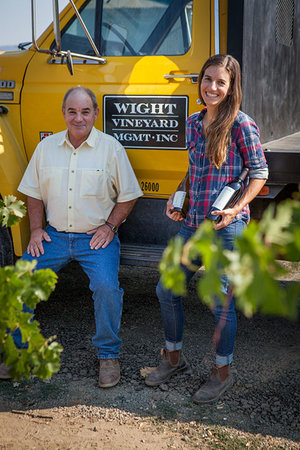 There is nothing pretentious about a visit to Lewelling.  The experience includes walking the property, learning the history of the land, viewing pictures and other relics of the family’s heritage, and hearing about commitment to their craft as farmers and winemakers.  Lewelling does not operate a tasting room.  Sampling wine takes place on a picnic table under a large oak tree in the backyard of a farmhouse on the property.

Lewelling has a limited production of about 1,200 cases per year that is taken from a 29-acre parcel of the estate vineyard.  The excess fruit from the 90-acre vineyard is highly sought after and is sold to premium producers, such as Caymus.

Production is divided between two offerings. The 2015 Cabernet Sauvignon ($65) is a 100% varietal that was aged 18 months in 70% new French oak barrels.  It has pleasing aromatics and texture, a good amount of fruit, and a bit of spice on the finish.  It’s an excellent value.  Also a 100% pure varietal, the 2015 Cabernet Sauvignon Wight Vineyard ($90) is a barrel select wine from the same vineyard parcel.  As in many vintages, the Wight Vineyard is similar to the main cuvee but ratchets up the concentration somewhat.  Having spent 20 months in 80% new French oak barrels, it has a tad more sweet oak and is slightly richer with a longer finish.

The wines are sold by allocation through the website mailing list as well as through select retailers and tend to sell out rapidly.  Lewelling offers its mailing list customers a significant price reduction of only $114 per pair, for one bottle each of its Cabernets.  Further, the prices have barely increased over the past 15 years and certainly not commensurate with the accolades they have received.  If you have not yet tried Lewelling you may want to do so.  It’s hard to find a better value for Napa Cabernet Sauvignon. To read more and sign up for the mailing list go here: www.lewellingvineyards.com.

Hayfork Wine Co. Over a decade ago Winemaker Haley Wight started her own project, Hayfork Wine Co., with support from her father Doug and husband Erik Dodd.  The Hayfork label has received outstanding reviews from the onset.

Like the Lewelling label, Hayfork produces two reds each year with grapes sourced from Lewelling Ranch and recently introduced its first white wine. The 2015 Cabernet Sauvignon ($75) is 96% Cabernet and 4% Petit Verdot and was aged in 70% new French oak.  It is fresh, dark-purple in color with tasty fruit that balances richness and elegance.  The 2015 Field Select Cabernet ($125) is from a particular block of Cabernet in the estate vineyard. It is also deep purple in color and is slightly more concentrated and richer than the regular cuvee.  This may stem from being aged in 100% new French oak and also containing 14% Petit Verdot.  If you like opulent Cabs, this may be for you.

The newest offering from Hayfork is the 2107 Grenache Blanc ($30, 130 cases).  It is a 100% varietal with fruit sourced from Kenefick Ranch in Calistoga and aged in neutral oak.  This wine is light, dry, refreshing, and a pleasure to drink when served cold on a warm day.

Hayfork wine can be purchased directly from the website and through select retailers.  For more information and to signup on their mailing list go to: www.hayforkwine.com.

This article was written by IWR Technical Editor, Doug Ross.