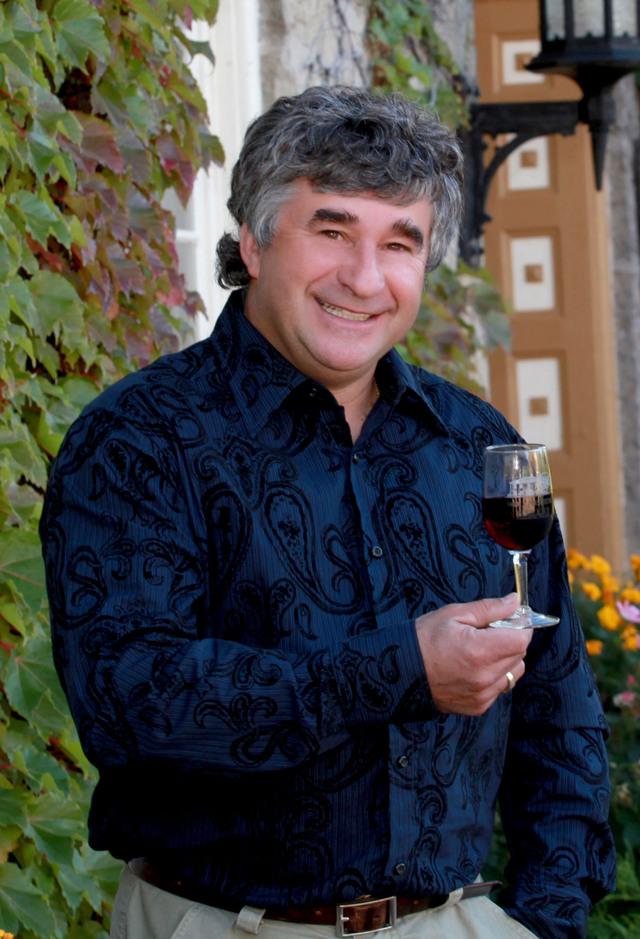 Agoston Haraszthy, a 19th century Hungarian immigrant who created Wisconsin’s first winery and later became the father of California wine, and Philippe Coquard (shown here), a 20th century French immigrant from a Beaujolais winemaking family with four centuries of winemaking heritage, both contributed to the success of Wisconsin’s best known winery, Wollersheim.  Today the Wollersheim winery has 27 acres of vines in the Lake Wisconsin AVA and makes easy drinking, well balanced and flavorful wines that are as inexpensive as they are delicious.

Agoston Haraszthy is famous as the pioneer who founded California’s wine industry, “discovered” Zinfandel, and made California’s first “champagne”. He is less well known as the Hungarian immigrant who came to Wisconsin in 1842, founded a Wisconsin village (called Széptaj, now Sauk City), ran a steamboat line, experimented with grapevines and created his winery on the south-facing, steeply sloped banks of the Wisconsin River. The limestone wine cellar he dug was only recently renovated at Wollersheim.

The winery Haraszthy founded, now called Wollersheim, was taken over by a German immigrant named Peter Kehl, whose family built the still-standing stone winery and made wine until the end of the 19th century. In 1972 Bob Wollersheim purchased the Haraszthy vineyard and created his eponymous winery. He provided the vision and entrepreneurship essential to the winery’s development. And in 1984 Philippe Coquard, who studed viticulture and winemaking at the Montpelier in France, arrived from Beaujolais on an international exchange program sponsored by the FFA (Future Farmers of America) and soon began making the wines for Wollersheim. 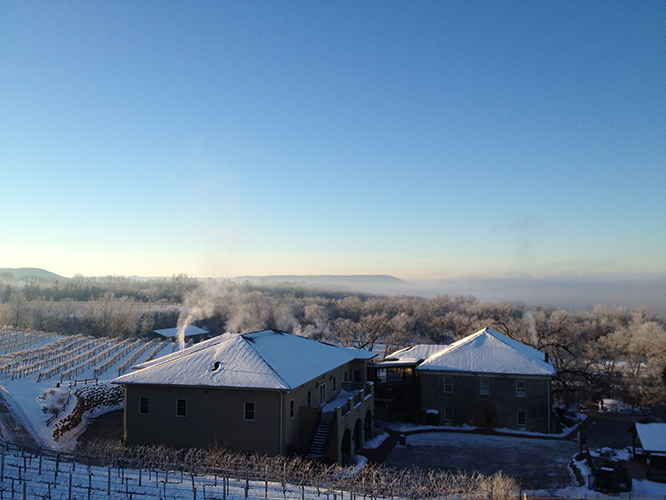 Wisconsin is not an easy place to grow grapes. It’s too cold for the vitis vinifera of Europe, so initially wines were made from native grapes (vita lambrusca). However, in the mid-20th century Elmer Swenson of Osceola, Wisconsin, began breeding grapes for Wisconsin’s cold climate, and two of his winter hardy white cultivars—St. Pepin and La Crosse—are planted at Wollersheim.

But the star variety at Wollersheim is the French hybrid Marechal Foch. Foch ripens fully by the end of September and produces a light red wine similar to the Gamay Noir of Beaujolais. Like Gamay, it is an under-appreciated grape that has the potential to make wines of surprising complexity and depth in the hands of the right winemaker.

Wollersheim’s vineyards are 700-1000’ in altitude with south and southwest facing slopes and deep, sandy, loam soils with good drainage. Their location near Lake Wisconsin and the Wisconsin River delays frosts and give a growing season of 140-160 days, considerably longer than adjacent areas. 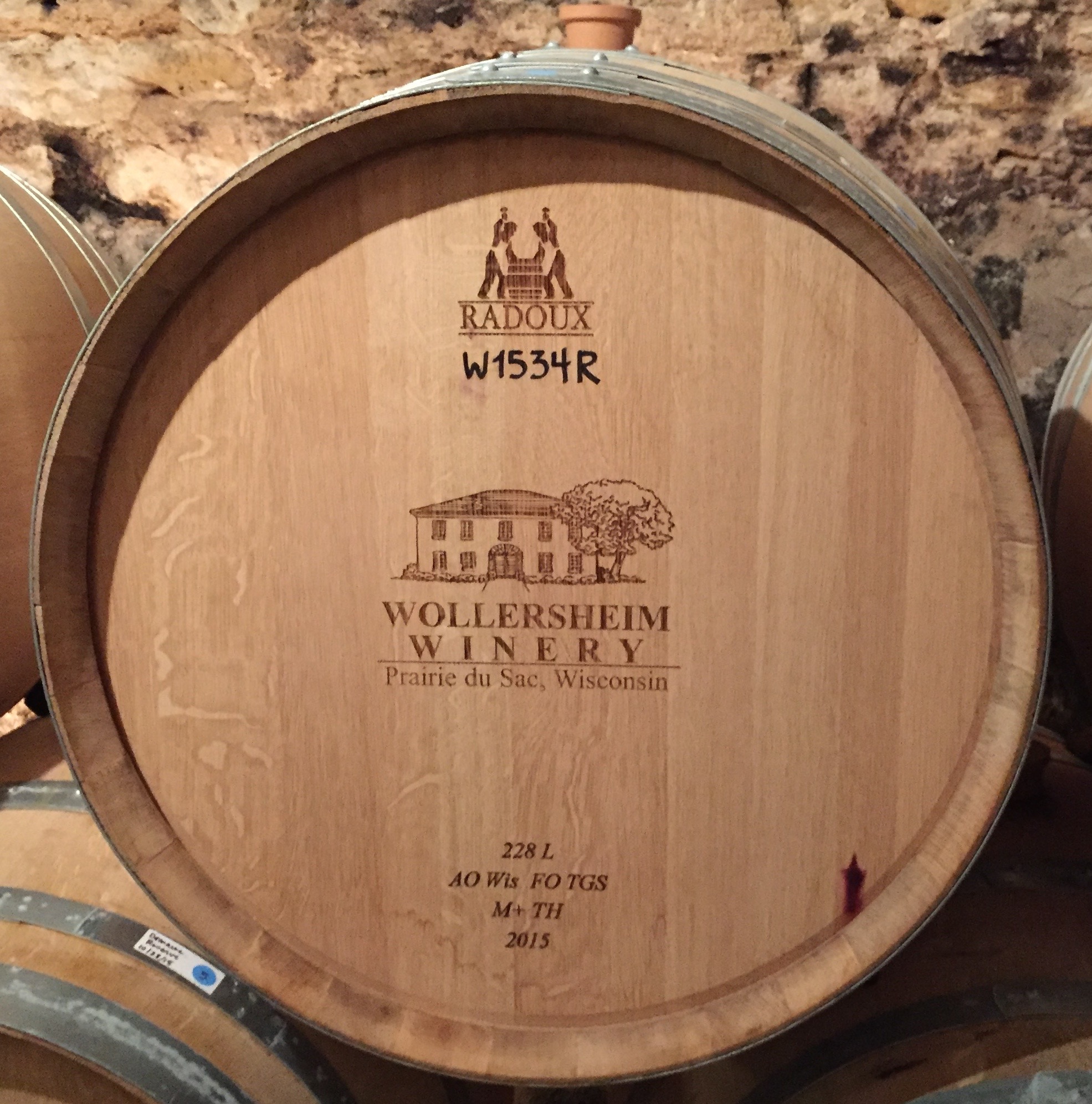 Philippe’s winemaking is perhaps best described as honest and non-interventionist. He avoids the use of enzymes, wood chips, and other tricks of the trade and lets the fruit express itself and its terroir. He contracts with the French barrel maker Radoux to custom make hybrid barrels of Wisconsin and French oak. Given the growing constraints of Wisconsin, he brings in fruit from well-known growers in Washington State and New York State, transporting chilled grapes in 800 pound containers. In addition to his own wines, Philippe also sells a Beaujolais made by his family in France called Domaine de la Terriere Cuvée Jean Coquard. Like all his wines, it is amazingly inexpensive (just $10!).

Wollersheim 2015 Prairie Fume American ($10)  While not made from Wisconsin fruit, this wine is Wollersheim’s most popular, and its creation in 1988 saved the estate from bankruptcy. It reveals fresh pear on a soft, easy drinking palate with a touch of residual sugar and just 10% alcohol. Made from Seyval Blanc fruit brought in from New York’s Finger Lakes.

Wollersheim 2015 Dry Riesling American ($10) This is a dry Riesling that reveals good varietal character. With green apple aromas on the nose and flavorful orchard fruit flavors, it has excellent sugar-acid balance. Made from Riesling grapes grown in Kennewick in Washington’s Columbia Valley.

Wollersheim 2015 Prairie Blush Lake Wisconsin ($10)  This 100% Foch wine is fermented like a white wine but the pink juice of the Foch grape gives it an appealing light red color. The wine is exceptionally fresh and light with red cherry and apple notes and is bottled early, around March.

Wollersheim 2015 Domaine du Sac Lake Wisconsin ($14) Made from the fruit of three different 20 year old vines, it has an attractive nose of earthy dark red fruit. It’s smooth and fresh on the palate with very good depth and a distinct spicy character. Fermented 50% whole berry and aged 6 months in French and Wisconsin oak barriques. A blend of 90% Marechal Foch and 10% Millot.

Wollersheim 2014 Pinot Noir American ($17)  Made from Washington State fruit, this light but pleasing and well balanced wine reveals aromas and flavors of cherry and red berry and just a hint of earth. Made in open top fermenters with daily pumpovers and aged in French oak barriques for one year prior to bottling.

Wollersheim 2014 Domaine Reserve Lake Wisconsin ($25)   Semi-opaque dark ruby color, showing elderberry, huckleberry and toasted oak on the nose.This is a big, mouth filling wine with good balance, tangy acidity and outstanding length. Made from 45 year old Foch vines picked at 22-23 brix and grown on steep, south facing slopes and aged one year in hybrid Wisconsin/French oak barrels custom made for Wollersheim by Radoux. This is an excellent wine by any standard and the best one we’ve ever tasted from hybrid grapes.