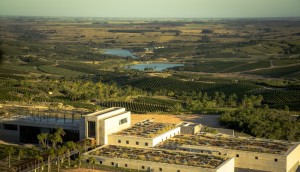 Bodega Garzón is a new Uruguayan winery producing outstanding, limited production, estate-grown wines. The eminent Italian enologist Alberto Antonini leads the winemaking team, which in 2015 inaugurated a new, world-class, LEED-certified winery. We review the Tannat and Albariño wines currently imported to the US.  Tannat, of course, is Uruguay’s signature grape, and the 2013 Bodega Garzón Tannat is excellent, and an outstanding value.

Bodega Garzon’s 524 acre vineyard  is located just 11 miles from the Atlantic coast near the glamorous resort of Punta del Este. Sharing the same latitude as cool-climate Chile,  New Zealand, and the Western Cape of South Africa.  Its location is ideal for growing wine grapes, offering maritime winds, cool and warm temperatures and varying altitudes and exposures.   The winery follows precision agriculture (the vineyard is divided into 1,150 parcels) and is committed to sustainable vineyard management practices.  This year a newly constructed state-of-the-art gravity flow winery became operational. It’s the only LEED (Leadership in Energy and Environmental Design) certified winery outside North America. 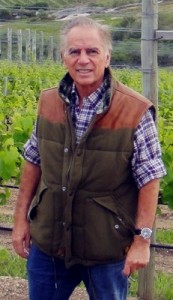 Bodega Garzón was established by Alejandro P. Bulgheroni, a lifelong agriculturalist  who  developed an interest in wine and became a partner in the Vistalba winery in Mendoza founded by Carlos Pulenta.  He later added estates in Tuscany, Bordeaux and California and is developing a new winery project in Patagonia.  Alejandro Bulgheroni’s goal is to elevate Bodega Garzón  to world-class status. Based on our tasting of his wines, he is well on his way to achieving that objective.

US Importer: Carolina Wine and Spirits

Want access to our in-depth reports and wine reviews on Uruguay and other regions worldwide? Become a subscriber today.
Subscribe Now 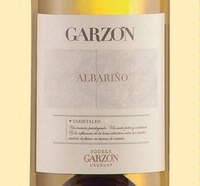 Garzón 2014 Albariño ($17) 90   The 2014 Albariño offers fragrant aromas of yellow flowers with a hint of mandarin on the nose.  On the attack it reveals a pleasant spritz of fresh citrus, crisp acidity, a round mouth feel with good length and rich extract on the finish.

Garzón 2013 Tannat Uruguay ($20) 93  This  Tannat is among the finest tasted from Uruguay.  It has rich and fragrant dark fruited aromas on the nose.   On the palate it is silky and elegant with considerable depth of dark cassis and black raspberry  fruit.  It is full-bodied and exhibits  hints of graphite and tar, and shows fine round firm  tannins on the finish.    Great value!

The wines of Uruguay are relatively unknown in the US market.   We were thus delighted to have the opportunity earlier this year to taste a selection of fine wines from Uruguay at a tasting held  at the Sofitel Hotel in Washington, DC.  The tasting was sponsored by Wines of Uruguay, an association of 23 member wineries and included a seminar on Tannat and the wines of Uruguay by Master Sommelier, Gilles de Chambure.   For our report, click here.